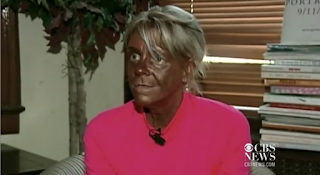 We love to point the finger at someone else and say that what that person did or said is racist. And if someone calls us a racist, well, those are fighting words.

But being racist isn't just calling someone the n-word or burning a cross on someone's lawn. If you grow up in this country, you can't help but pick up on the racist attitudes that are so prevalent in our society. We just don't notice how those attitudes subtly permeate so much of what we say and do.

I keep thinking about this in regard to my two sons. They're both sweet, thoughtful boys, but as we were driving down Santa Monica Boulevard yesterday, they spied two black men huddled up with a white woman--she kinda looked like that crazy tanning mom.

Okay, maybe she wasn't that tan, but still, you get the point.

Anyway, while we were stopped at the stoplight we had a good view of this trio's activities. My eldest, Mr. O, says, "Look at those black guys. They're probably drug dealers" and my youngest son, Mr. T, agreed with him.

To me, all three of them looked kinda shifty--like they were up to no good but trying to pass for wholesome, sweet-baby-Jesus types. So it fascinated me--and concerned me--that my sons assumed that only the two black guys were the criminals.

It makes sense that they'd think so. After all, the War on Drugs effectively created a solid association in our minds between black males and criminal behavior. On the other hand, I'm not one to let such comments pass. So, I asked them about it.

"Why do you think those two black guys are drug dealers?"

"What specifically makes them look like dealers?" I asked as the light turned green and we left the trio behind.

"Oh really?" This was getting good. "Suspicious as in Trayvon Martin suspicious?"

"Suspicious as in you're black so you're automatically suspicious and someone might come and decide to shoot you," I replied.

"Yes you can," I said. Mr. T--in full annoying little brother mode--decided to chime in before I could continue.

"That is kinda racist to say a black man looks like a drug dealer," he said to Mr. O. "Did you see any drugs? Huh? Did you? DID YOU?" Mr. T was conveniently forgetting that he had, just moments before, agreed that the guys looked like dealers.

Mr. O was automatically defensive. Just like everyone else in America when conversations like this go down.

I could tell he was getting upset as he and Mr. T debated whether it was racist to say the guys were dealers so I interrupted.

"I just think it's interesting that out of the three people standing on the corner, you both initially thought the black guys are the dealers," I said. "How do you know the white lady isn't the one selling the drugs and they're her customers?"

They'd never thought about that before.

The rest of the ride home we talked about how in a few years when they're older the two of them could be walking down the street--or standing on the corner waiting for the bus--and someone will be inclined to think that they're also drug dealers, simply because they're black and male.

"But mom, do you really think they were just innocent guys?" Mr. O asked me as we pulled into the garage.

"It doesn't matter what I think," I told him. "In this country we have a principle called innocent until proven guilty. I can't say those guys are dealers until they offer me some drugs. Then I know for sure."

I didn't tell them that before they'd gone on their drug dealer tangent, given where we were and the time of day, I'd assumed the white lady was a prostitute, one of the guys was a john, and the other was her pimp.

Is that any better than assuming the two guys are drug dealers? Probably not. Those three could just be a trio of friends who are down on their luck and in need of assistance. But, I'm aware of my assumption and that it might have its roots in attitudes that aren't positive. Admitting my faults and getting honest about them instead of acting like they don't exist is the first step to doing something about it.
Email Post
Labels: black males Drugs Los Angeles racism

Phyllis said…
Hi Liz,
I'm running and have only a minute to respond. I think this in one of the most important posts you've written (although I think that about a lot of them!) I'll be passing this around as much as I can. Thank you - you teach us all such important ways of reconsidering our beliefs.
12:03 PM, May 10, 2012

Anonymous said…
If you continue to hold yourself responsible for your opinions, then you'll continue to think and question. Your sons are lucky to have your guidance.
Jenny
2:36 PM, May 10, 2012

BeverlyHillsMom said…
Reading this, what automatically popped into my mind was the story about Jamil Shaw, a black football star / high school student who was gunned down by a gangbanger because he was black and had a red backpack, which was the color of the rival gang of said gangbanger. I see that there need to be lots of conversations with our kids about how to be wary of shifty folks regardless of their race. It's really complicated, but I think your reply to the kiddos about innocent until proven guilty will be the tagline for now - thanks for the post ;)
2:56 PM, May 10, 2012

Liz Dwyer said…
Phyllis,
Thanks for saying so. I'm glad the opportunity presented itself for me to have this conversation with my boys. It's far easier to believe that racism is someone else's problem--but we all are affected, and we’re all participants in it.

Jenny,
Thanks for reading. I'm lucky to have my sons to get me reflecting about these issues. There's enough questioning or independent investigation of truth in our society.

Beverly Hills Mom,
The whole gang thing and colors and being gunned down...I think about that quite a bit in regard to my sons. But for most Americans, that feels so far away and so they don't have to care too deeply. They don't see how it affects them as well, even when it's not their kid being shot.
11:58 AM, May 11, 2012

Caryn B. said…
Liz...you are teaching your sons some very important life lessons...I love how you asked them how they came to that conclusion and talked through it with them.....
9:41 PM, May 12, 2012