If You Love Basketball, Why Aren't You Going to WNBA Games? 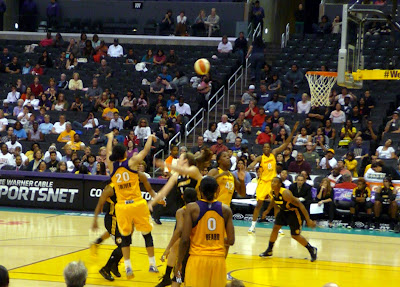 If you watched the Celtics vs Heat game last night you got to see Miami's Dwayne Wade and LeBron James battling Boston's Kevin Garnett, Paul Pierce, Ray Allen, Rajon Rondo...you know their names. They're NBA stars with multimillion dollar salaries and endorsement deals. When I saw Garnett get kicked in the stomach without a foul being called, I was outraged. What kind of unbiased refereeing is that? But then I remembered that Garnett's making at least $21 million in salary this year to play such a physical game while the maximum another set of equally talented professional basketball players can earn if they stick around their league for six years is $101,500.

It's one thing to know on a cerebral level that WNBA players still don't get the attention, pay, and respect they deserve. It's quite another to go to the Staples Center--knowing it would be packed to the gills for a Clippers or Lakers game--and see so many seats empty. That's what happened Tuesday night when I went with my family to see the Los Angeles Sparks whup the Tulsa Shock into submission.

The women go hard--my 8-year-old son remarked that they might even be playing more intensely than the guys do. If you love basketball, there is no place better to be than at a WNBA game. And, unlike the ridiculous prices on NBA tickets, you might actually be able to afford seeing a WNBA game. You can get great seats--seven rows off the court great--at Staples for $55 a ticket. But, the average attendance at a Sparks game is about 8,700 people. Meanwhile, a Laker game draws 18,997 people--the capacity of the Staples Center.

Why all those people will pay crazy dollars to see one and not the other baffles me because the Sparks are a world-class team. I saw the Sparks' Kristi Toliver do something that Rondo could not last night--hit a three-pointer under pressure at the buzzer to win the game by one. Want to see what Toliver's postgame show looked like? 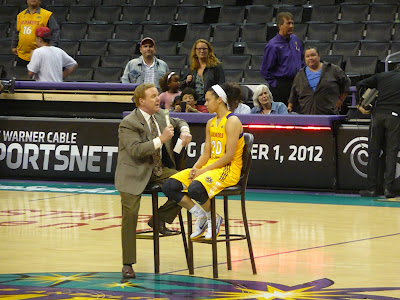 The most gratifying thing was hearing my son tell me in the car on the way home that he's decided he likes the WNBA better than the NBA because the women are "just soooo awesome." Maybe if a generation of kids gets to grow up understanding that if you really love basketball, it's a no-brainer to support the women, too. Maybe then the Kristi Toliver's of the future will be household names. Just like the men.
Email Post
Labels: basketball WNBA women

Val said…
I think one of the reasons the WNBA isn't as popular as it should be is that male sports journalists are always mocking it and saying how awful it is.

My theory is that those male journalists are actually resentful of the WNBA because when they were kids they dreamed of being pro athletes but weren't good enough in most case. So then they see WNBA players making a living as pro athletes and it drives them crazy.
6:22 AM, June 09, 2012