The Day After the World Exploded Because of a Mom, a Kid, and BOOBS 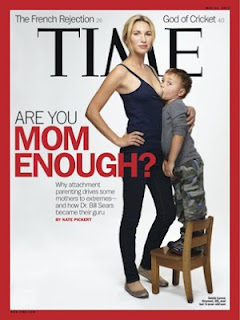 Put a woman's breasts on the cover of a magazine and have her nearly 4-year-old son standing on a chair nursing and America--which, in true First World Problems fashion, has the luxury of treating a photo of a kid nursing like it's the fall of the Berlin Wall--goes insane.

In corner number one is the "OMG this is, like, soooo disgusting" posse. Their arguments:

1. What About the Future Bullies? Just wait till lil homie gets to middle school and gets bullied because all the kids will remember the mag cover he and his mom were on 10 years earlier and start fake coughing and saying BOOBS when he raises his hand class.

And how will any teacher be able to have a parent-teacher conference without staring this mom in the face and saying, "Your son really needs to BOOB--I, uh, I mean, BRING his math grade up."

Hmm...I can't remember what happened last week. I don't think I'm gonna remember this cover in a decade--quick, ask yourself how many times a day you think about Demi Moore's controversial, butt naked and preggo mag cover? I bet you don't.

I doubt my sons will think about this cover either. We kinda have more important things going on, and as far as teachers, have you seen how stressed they are? Seriously, they have more important things to worry about, too. And gosh, we must not believe in all the anti-bullying messaging out there because clearly--get ready for a depressing takeaway--we think bullying will still go down in our schools in a decade.

2. That Mom Has Issues: What mom DOESN'T have issues? We're supposed to have issues so our kids can grow up, go to therapy, and blame how jacked up their life is on us. Trust me, you don't want moms without issues. All the people going to grad school to become therapists wouldn't be able to find jobs and they'd end up on unemployment and food stamps and crash the economy. Yes, it would be their fault if we land in a recession again, NOT J.P. Morgan types and their oops-we-just-lost-$2 billion drama. 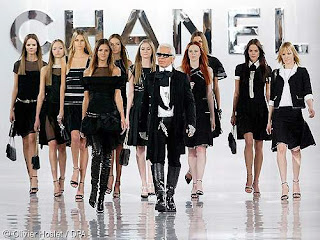 Even Karl Lagerfeld is disgusted by you. We both hope you’re busted by law enforcement.

In corner number two we find the "That mom with her kid sucking on her boob on a national mag is my new shero! YOU GO GIRL!" crowd. Their arguments:

1. No One Can Tell Any Woman When to Start or Stop Breastfeeding: I agree. And I'll take it to the next level. You wanna breastfeed while dressed up like Darth Vader, DO YOU, girl. Wanna feed your baby Similac before he's born, go for it. Just don't ask me why your baby has three eyes and 2 heads after he's born, mmkay?

Yeah, I bet if Similac executives could make in vitro baby formula happen they would. They'd tell us, "Moms, it's just as healthy as the stuff traveling from your umbilical cord to your baby."

Can't you hear Similac's strategy meetings? "Look people, we gotta get these babies hooked as formula customers by the time they're 0-years-old."

2. Screw You, TIME Magazine, For Suggesting I'm Not Enough: Yeah, TIME has brought on the wrath of moms who are sick of the mommy wars. These moms are tired of being wracked with guilt over not being--or doing--enough for their kids. Oh, and the editor who came up with this cover line is an asshole.

I don't spend a lot of time beating up on myself for not doing enough for my sons. They have a bed to sleep in, I fed them dinner, it's the Friday night before Mother's Day and I watched two whole hours of wrestling--Friday night RAW! Go, John Cena and Randy Orton--with them. I deserve a medal just for that. They better not ask me for a thing the rest of this weekend.

That said, when my boys were babies I would've been willing to write "I'm Not Enough" 100 times in neat cursive--just like Sister Paula taught me--if I could've had the paid maternity leave they have everywhere else in the industrialized world. Moms in freakin' Bulgaria get one year of paid--100 percent of their salary--maternity leave. What is wrong with the U.S.?

And as far as that editor? Can you blame him? If he doesn't move this magazine off shelves or drive more users to the TIME website, the hammer is coming down.

3. I'm SOOO Proud of that mom! I know a lot of women are super proud of her, but I bet half of them are telling their husbands, baby daddies, parents, and coworkers "Hell to the NO, I wouldn't have taken that picture. Are you freakin' crazy?" I'm with them. I can't fathom taking a photo like this and putting it out there for the whole world to see but then again, I also couldn't be Lady Gaga in a bubble dress, either. Do what you will with that tidbit of information.

Of course, what's really sad to me is that all of the moms TIME chose for this story--and the cover--are white. The mom is white, the nursing boy is white--even though she has an adopted son from Ethiopia who is older and also still nurses. Given all the drama this cover caused, can you even imagine how people would've flipped out if this mom had her black adopted child in this pose? America would have imploded due to the mass hysteria.

I'm disappointed that TIME couldn't be bothered to show a more diverse group of nursing moms--we are out there. I nursed one of my kids till he was 18 months, and the other one till his third birthday. I didn't know what attachment parenting was or who Doctor Sears was back then. I just didn't have a lot of money for baby formula so the free, nutritious milk coming from my body was a no-brainer.

Plus, I did those Bradley natural childbirth classes and the instructor told me about La Leche League's support for nursing moms and how Similac made baby poo smell so much worse. Yep, that particular detail sold me on breastfeeding.

All this drama over this picture really has me wondering: Does this mean we're over Janet Jackson's two-second Super Bowl nipple flash? C'mon, give Janet a break. At least she didn't have a kid hanging off of it.
Email Post
Labels: boobs breasts kids magazines mothers parenting wrestling

nick said…
Why anyone should find this picture the slightest bit offensive as opposed to just jokey and making a point I don't know. Either (a) they have too much time on their hands (b) they have a prejudice and three dogmas to maintain or (c) they're desperate for attention. Or all three.

And I'm equally baffled as to how the media can still get away with a sea of white faces and keep all the black faces safely on the cutting-room floor.
9:35 AM, May 12, 2012

Leslee said…
I haven't read the article in Time, just seen the cover and read so many nasty comments about it. It really breaks my heart to hear the mean and uninformed things people are saying. I was so pleased to see Jamie Lynne in two interviews where I realized she is incredibly intelligent and articulate and I felt that anyone who actually watched and listened to her couldn't possibly find anything negative to say. I nursed my first child til she was 2 years and 8 months and the other until 18 months. It wasn't something I planned, just something I knew at the time was right for MY children. I wrote a post about my experience on my blog too, hoping that it adds to lessen the stigma. But I'm trying to remember, instead of taking it personally, that if people can look at something natural, normal, and loving and see something grotesque than that is their problem and they perhaps need more compassion than I do. Thanks for writing this...I enjoyed it.
1:17 PM, May 12, 2012