Every Depeche Mode fan has a fantasy: We're at one of the concerts and then somehow, just like Bruce Springsteen pulled innocent Courtney Cox onto stage in his classic Dancin' in the Dark video, we're whisked out of the audience and given the chance to be up on stage with our favorite band in the whole wide world.

However, lets be clear, my fantasy involves me dancing on stage with Martin or Dave or pushing the buttons on Fletch's synth while he eats a banana. It does NOT involve me singing.

Nails scratching on a chalkboard and coyotes howling sound better than my singing. Not even autotune could make me sound human. To spare the world the pain of my voice, I generally only sing when I'm alone. When I go to a Depeche Mode concert, I sing along with the songs and pray that the people standing next to me are too enthralled with what's happening on stage--and singing along themselves--to pay me any attention.

Every night this week I've had nightmares--last night's featured people I went to high school with that I haven't talked to years (and were kinda mean to me back then) showing up at my door, claiming that I'd invited them to stay. As awful as that dream was, it pales in comparison to the doozy that was Monday night's fright fest. It was so terrible, horrible, no good, and very bad that I can't stop thinking about it.

In the dream, I somehow got the chance to be on the stage with Depeche Mode and SHOCKER frontman Dave Gahan asked me to sing along with him. He was perfectly charming when he asked, Martin Gore was winking at me, Fletch was clapping, Depeche Mode's manager Kessler was standing to the side--looking pissed as usual--and the entire stadium erupted in cheers.

I did the whole bashful, "Who, me? Sing with you? But OF COURSE!" thing. So Dave asks me what song I want to sing. I tell him whatever he wants. "Well then, let's do Personal Jesus!" The music starts just as I'm thinking to myself, "Personal what???"

You know that screech sound when the needle falls off the record? Yeah, that happened. Dave and Martin looked shocked. The crowd booed. Dave says, "OK, she missed her cue--stage fright, eh? Let's try it again!"

I actually had to confess to them,"Um, I don't think I know that song." (Which, for the record, isn't true. I could probably sing it backwards for you if you paid me.) They stopped the concert, pulled out a list of ALL their songs and went through them, one by one.

"Nope, I don't know that one. Never heard of that one," I replied every single time, cringing from the shocked look on their faces.

The crowd turned into this: 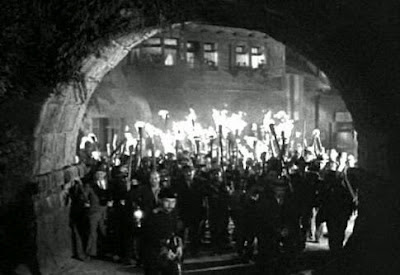 That's when I woke up, absolutely terrified. After my chest stopped pounding, I sang the first verse of Personal Jesus from memory just so I could be sure that I did actually still know it.

So what does this dream mean? I have no idea. All I know is I don't want it to become a recurring one. And Dave, Mart, Andy, if I ever do get up on stage, just ask me to wipe sweat off your brow, hold a guitar, bang a gong--peel Fletch's bananas. Just don't ask me to sing.
Email Post
Labels: #MartinGoreIsTheBombdizzle Depeche Mode dreams

nick said…
I think it's just your over-active imagination dreaming up a worst possible scenario situation. It wouldn't happen in real life, I guarantee. Also, Liz, I'm sure your voice is much better than you make out!
2:12 PM, May 18, 2012