Fourteen Years Later, a Hike to the Hollywood Sign 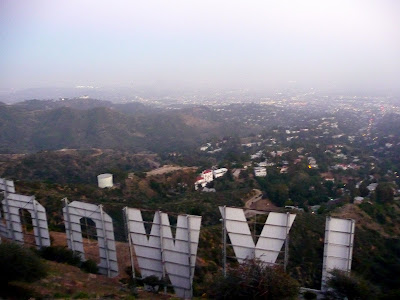 I don't know precisely when I first started wanting to hike to the Hollywood Sign. It certainly wasn't on my to-do list when I first moved to Los Angeles 14 years ago. Back then I hardly ever went to Hollywood--I spent the majority of my days 24 miles to the south, teaching in Compton. After work I'd go jog at the track at Compton Community College, and head home to my apartment 5 minutes away in North Long Beach to grade papers and prepare for the next day's lessons. There were no vistas of the Hollywood Sign in my existence, and I rarely thought about it.

But after my first year here I moved to the northeast side of Los Angeles and every day when I stepped out into my backyard I had a gorgeous view of two of the city's icons, the Griffith Park Observatory and the Hollywood Sign. The Observatory is easy to drive to, and I soon became a regular trekker on the trail behind it up to the top of Mount Hollywood. I asked someone if it was possible to hike to the sign from the Observatory. "Yeah, but the trail is confusing and there are snakes and if you try to get up close to the letters, you'll get arrested," was the reply.

Hmm...maybe it was the combination of danger and walking that did it, but somehow over the past few years walking to the Hollywood Sign has crept onto my bucket list. I've never attempted it alone because:
a. I didn't want to get jumped by a mountain lion or coyote, or be bitten by a rattle snake, and
b. I didn't want to take a wrong turn and then be one of those people who have to be rescued from Griffith Park by the park rangers, and
c. I didn't want to trip over something, hurt myself, and--because there's little cell phone service in the park--have either A or B happen. 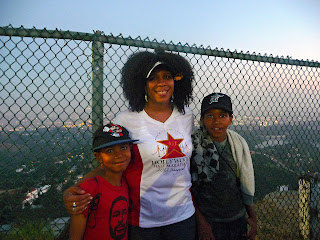 My sons were so amped about getting to the sign that their enthusiasm made me step back and realize that being up on Mt. Lee, standing across a fence from the back of the sign--it's a big deal! No we don't have an Eiffel Tower or London Bridge in Los Angeles, but dangit, we have a sign!

I also got a little emotional when I took this photo with my boys because it made me think about how they are, at such young ages, doing really amazing things. When I picked them up after school yesterday, they were still talking about it. "Dude, have you hiked to the Hollywood Sign? It's AWESOME!"

They're right, it is pretty awesome. We only had a few minutes up there before it was dark--I wish we'd had more time to just enjoy the views of the city. I don't know how many Angelenos have hiked to the Hollywood Sign, but I bet it's less than 1 percent. If you want to walk up there but you're scared of being attacked by animals and getting lost like I was, hook up with the Big Parade folks next year. I promise, you'll make it to the top.
Email Post
Labels: Compton Griffith Park Observatory Hollywood Sign Los Angeles

Aisha said…
It is a big deal!

The Griffith Park Observatory was probably my favorite place that I visited in LA. You have all those amazing views of the city, mountains and Hollywood sign all in one place. Maybe one day I'll hike to the Hollywood sign as well.
6:54 AM, May 27, 2012

Liz Dwyer said…
Aisha,
Aren't the views just breathtaking? I certainly hope you do make that trek to the sign one of these days. It certainly is worth it.
5:15 PM, June 02, 2012