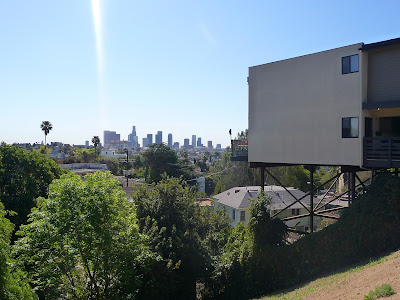 Several years ago I started taking long through my neighborhood on Sunday mornings--but sometime last year I abandoned the practice. My schedule is always crunched and so Sunday morning has turned in to errand-running time. But today I was feeling restless, so I headed out across my neighborhood's steep hills with my eager walking companion, Andromeda the Destroyer of Lovely Shoes. 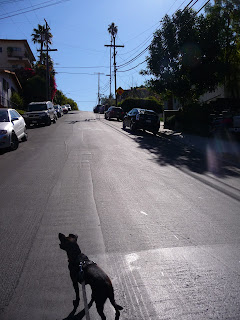 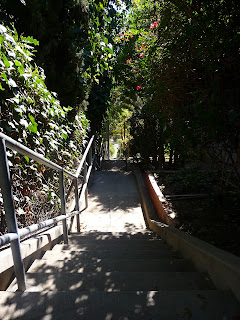 On the stroll back home I got to visit Hans, the 75-year-old Swedish gentleman I've had the pleasure of getting to know over the past few years. I hadn't seen him in awhile--indeed, a few weeks ago I found myself wondering if he'd passed away--but when I saw him in his front yard this morning, I was happy that he's still alive, still smoking his Pall Mall cigarettes, and still telling entertaining stories.

Hans is growing plenty of fruits and vegetables--cauliflower, tomatoes, avocados, oranges, and peaches in his backyard, and it got him reminiscing about some of the rationing he experienced when he was a child living in Switzerland during WWII.

Switzerland was blockaded by Germany, Hans told me, and since they had no ability to import things, everyone had a garden. Nowadays most people have a hard time cutting out sweets and eating more green vegetables, but Hans said that during the war, everyone was pretty healthy. "There was no sugar, only a little meat," he told me. "We were rationed 10 eggs a month."

We talked war history for awhile and he told me that although being a child in WWII was hard, he always counted himself lucky that he wasn't born in 1895 like his father. Since his father "was just old enough to have to be in WWI and not too old to be in WWII," he had to spend 10 years of his life in the military. 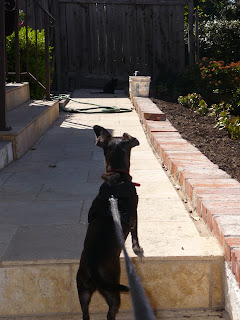 We got to talking about the slave trade and the racism that still endures in America. But, he said, he's seen racism change from when he first came to America in the late 1950s. He remembers his first landlady in Hollywood freaking out. "Oh my God, the new mailman is black!" she complained, and told him she was going to call the Postal Service about it. We had a good time laughing over how ridiculous that was, and then I noticed that it was almost noon and I had to get home.

Even though I'd spent nearly an hour with Hans, it felt like we'd only been chatting for a few minutes. Ever the gentleman, he stuck out his hand to shake mine in farewell. I gave him a hug instead.

Of course, his cat Mousey is still as adorable as ever. Andromeda attempted to say hello to her, but Mousey feigned indifference. "Maybe they will make friends next Sunday," Hans told me. Indeed, we will be back to say hello. I need more conversations with Hans.

nick said…
A pity it takes a war to get people to grow their own fruit and veg and eat more healthily. The amount of crap we all eat nowadays is frightening.
11:48 AM, March 05, 2012

Liz Dwyer said…
Nick,
I know! His story about that really struck me--we have such a HUGE variety of junk in our stores and it's not even good for us. Tonight my boys and I were hunting for ranch salad dressing but it's impossible to find one without crazy amounts of additives.
1:22 AM, March 06, 2012