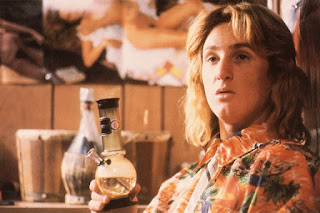 "Is that guy who shot Trayvon Martin in jail yet?" My sons have asked me that question nearly every day for the past week and a half. And every day I have to tell them no, George Zimmerman isn't in jail.

Last night 11-year-old Mr. O got angry. "There's no justice in this country if he hasn't been arrested," he said. "You can't just shoot a kid and get away with it. That's just not right."He stormed out of the room when I told him how certain media outlets are attempting to paint Trayvon as a bad kid--one that probably was a suspect--the kind that deserve to be shot and killed.

We've been told, for example, that Trayvon may have used drugs--an empty sandwich bag with marijuana residue was supposedly found on him. Now, I'm no cheerleader of drug use, but seriously? Maybe that icon of the American high school experience, stoned-out Jeff Spicoli in Fast Times at Ridgemont High--look at him with his highly dangerous bong--also deserved to be shot?

If people smoking weed is so incredibly threatening and scary, why does Hollywood keep churning out stoner comedies like Dude, Where's My Car, Pineapple Express and Your Highness?

Gee, I guess that's only good American fun and completely nonthreatening when it's on film--and when the stoners are not 17-year-old black males.

Some outlets are even insinuating that Trayvon was a drug dealer. Gosh, who knew that a 17-year-old out to buy Skittles and a can of iced tea was straight out of New Jack City? 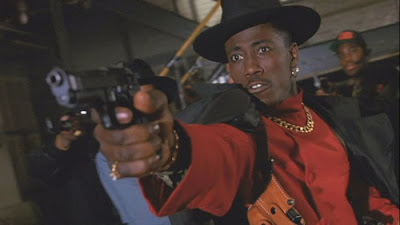 Yep, Trayvon is now Nino Brown. Never mind that he didn't have a gun and Zimmerman did. Black males are ALWAYS drug dealers, are always criminals in the eyes of too many Americans--They deserve to be shot because they might be dangerous. Never mind that this police video of Zimmerman with nary a bloody cut or bruise on him disproves his claim that Trayvon was beating him and so he shot him while fighting for his life.

Yesterday I overheard someone say, "I'm kinda sick of all this Trayvon Martin coverage. It's like, isn't there something less depressing to talk about?" Then I saw how the student newspaper at the University of Texas at Austin ran this incredibly racist cartoon portraying the attention the Trayvon Martin case is getting as simply the result of media hype: 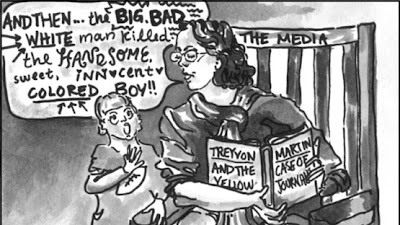 And it gets worse: A friend posted on her Facebook page today that she saw a web comment saying "Thank you, Mr. Zimmerman, for protecting your community from the Obamas runnin' wild."

I don't need these kinds of comments and cartoons to know that racism still exists, but what fascinates me is how some of my fellow Americans insist that it doesn't. Even when the evidence hits them in the face, they can't admit that racism is real. I mean, that has to be most post-racial cartoon you've ever seen, right?  Yes, it's fascinating how this situation has opened the closet door and put our skeletons on blast so everyone around the world can see just how insidious and deep-seated the racial sickness this nation suffers from really is.

That said, I'm thankful beyond measure for Kevin Cunningham, my Irish brother who first started the Change.org petition calling for George Zimmerman's arrest. Yes, a white man who didn't even know Trayvon believed that justice needed to be served.

After his petition got 10,000 signatures in just a few days, the organization reached out to him and asked him if he'd be cool with switching ownership of it over to Trayvon's parents. "When we heard about the petition, we were overwhelmed that someone we didn't know would take the time and effort to raise awareness about our son," Trayvon's mom, Sybrina Fulton, told MSNBC.

Now over 2 million people have signed--proof that there are plenty of people of all colors who, just like my sons, want justice. It's been 32 days. How much longer will Trayvon have to wait?

nick said…
It's a disgrace that George Zimmerman is still free and seemingly little has been done to arrest him or question him.

And how typical it is that all the racists are weighing in with (presumably) completely fabricated evidence about how Trayvon was violent, took drugs etc etc. Who cares if it's all lies as long as the political purpose is served....
12:23 AM, March 30, 2012

Unknown said…
The Facebook post sums it up: Obama being president has so many people afraid that the jig (probably bad choice of words, huh?) is up. That black men AREN'T drug dealers, and violent, and scary. That black men are intelligent and powerful and capable of running the country. The racists know the truth and are losing their mind. The only thing that is keeping me from losing my mind is the audacity of hope and the belief that we are in the dark hours before the dawn, and that things will soon get better, and we will finally "all just get along".
7:08 AM, April 02, 2012

Anonymous said…
There's no way that this isn't a tragedy of racism, but since the non-arrest is so completely insane, I found this Slate article relieving: http://tinyurl.com/bqv4d7u . It explains: "How did we get to a place where Zimmerman’s claim of self-defense, which seems barely plausible, could prevent his arrest?" Suggests that part of what's going on is not JUST rampant racism, but a ridiculous law.
7:56 AM, April 05, 2012