Hans, Mousey and Me 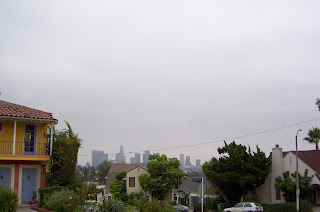 Every Sunday morning, when most of the young hipsters in my neighborhood are still sleeping, I head out the door for a long walk.

My husband does not fancy walking long distances and my children complain if I want to trek up the steep hills. Trust me, it's challenging enough to get up the 20-30% grades by myself, let alone while carrying a four year-old on my back. Plus, my sons inevitably begin to beg for ice cream and really, all I want is to hear the birds singing as I watch the morning fog lift its shroud from downtown Los Angeles. So, they remain at home and I strike out on my own. 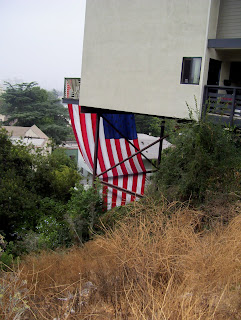 American flag hanging off the back. Then there's the half burned-to-the-ground Craftsman bungalow with the flowers still blooming in the front yard. And this past Sunday, there was a black cat perched on a terrace ledge, staring down on me with a mixture of curiosity and disdain.

The cat climbed down and deigned to let me scratch it's ears. Then it trotted along in front of me, pausing and turning, almost like it was checking to make sure I was following it. I decided to play along. After all, I had no where to be, no particular destination.

And then suddenly the cat ran into a yard and up into the lap of a man sitting out on his porch. I smiled for a second, listening to the man's happiness as he scratched her back and said, "Well, well. Where have you been, Mousey? Daddy missed you."

Then he looked at me and smiled. "And who is your friend, Mousey?"

His voice had a heavy, European-sounding accent and he stood to introduce himself. "I am Hans," he said. "Thank you for bringing Mousey home. She's been gone being naughty for two days."

Hans was a silvery-haired elderly gentleman dressed neatly in dark wash jeans and a plaid shirt. I introduced myself and told him how I'd followed Mousey. I complimented Hans on her friendliness. He kindly complimented me back by saying that Mousey only talks to those who are themselves friendly.

We got to talking and before you know it, Hans and I were buddies. I found myself sitting in front of his house on his waist-high garden ledge petting Mousey and listening to some of his adventures from his 72 years on this earth. I heard how he immigrated from Switzerland to Brooklyn, and later moved to Los Angeles because of love. 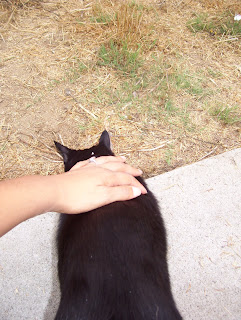 "Toward the end I'd have to turn off the gas in the house at night in case she'd wake up and try to go light the stove to cook me something. I woke up once and thought the whole place was going to blow, so I started doing that."

And now he's been rehabbing the house for the past three years because, "It occupies my time and takes my mind off how much I miss her."

Hans freely shared that he only paid $18,000 for his house and he chuckled as my jaw dropped over such an inexpensive price. He went on to describe how no one wanted to live in our neighborhood back then. Even rents were a measley $100 a month for a nicer two bedroom apartment.

Hans can't believe that the USC grad students living next door are paying $2500 a month to rent a one bedroom house. "And they're getting Ph.D.'s in English. Rent should be free for them!" he complained, as if he was witnessing injustices being done to his own children

"Do you have children?" I asked, sensing that this man with an easy smile most likely did.

"Yes, two. And one of my daughters moved back to LA to be with me." He had a twinkle in his eye as he said, "She thinks I need taking care of but I told her, that's what Mousey's job is."

I saw that he's missing two fingers on his right hand and I asked him how it happened. He told me how he lost them in an accident while building an aircraft carrier. "But I never notice it these days. I've lived with it so long."

And then his daughter came out of the house to check on her dad. She was just as friendly and down-to-earth as her father and told me to watch out because, "Next thing you know, my dad will have you over, making dinner for you like he does for those poor grad students next door." She smiled and mock whispered, "He's a terrible cook!"

Hans laughed good naturedly and as they teased each other, I realized that I'd probably been sitting there talking to him for at least half an hour. Probably longer, and I needed to get back home. So I said goodbye, gave Mousey one last scratch behind the ears and wished Hans good luck on his continued rehabbing.

I don't know if my walk will take me past their house this coming Sunday. But if it does, I don't think I'll mind saying hello to Hans and Mousey again.
Email Post
Labels: dementia Family fathers husbands Los Angeles marriage neighborhood Neighbors Strangers Walking

Anonymous said…
Sounds like some nice little friendships you made there, Liz - both man and cat! It's good that Hans is still so positive about life despite losing his wife. Rehabbing sounds a good way to minimise the grief and occupy himself. I walk round the neighbourhood a lot but people are usually far too rushed to stop and tell me their life story! We all need to slow down a bit.
2:21 AM, September 24, 2008

1969 said…
These are the moments that make life wonderful. Random encounters with wonderful people. Looks like Mousey brought you together!
5:54 AM, September 24, 2008

Anonymous said…
See what happens when people get out of their cars and talk to each other? Magic!
9:34 AM, September 24, 2008

Liz Dwyer said…
Nick
He was super positive and just seemed like such a happy guy. It's folks like him that really inspire me. He's still living despite the adversity he's had in his life.

I know I'm just nosy and I'll talk to people if the vibe feels okay, but most folks around here don't stop to talk either.

T Reeper,
Yes, I do like Deep Dish a whole lot. I think they're great.

1969,
Yes, Mousey is a black cat that brought some good luck!

Pisces,
I like walking around here a lot more than driving for precisely that reason. It makes a huge difference in how I see the world.
10:41 AM, September 24, 2008

Ian Lidster said…
You get such wonderful stories out of commonplace things, Liz. This was an enchanting little adventure. Thank you for taking me along. Your joie de vivre is infectious. I like a good walk. If I was in the neighborhood I'd come with you.
12:08 PM, September 24, 2008

Liz Dwyer said…
Ian,
It was definitely quite an adventure meeting Hans and Mousey. They're good people, er, person and cat! Next time you come to LA, you are more than welcome to traipse around with me!
1:01 PM, September 24, 2008

Dirty Red said…
This is why I love reading your blog. After watching the news and reading political blogs, this post just reminded me that there are still some good people left here in the good ole US of A. This post just made my day.

But ask me how I feel after I finish this English exam I have to take in about 15 minutes.

Liz Dwyer said…
Dirty Red,
That's so nice of you to say. Thanks. Especially with all the craziness going on in the world now, I agree, it is great to just reconnect with the stories of real and genuinely nice people.
10:41 PM, September 24, 2008

the joy said…
Wow. You meet the most interesting people. And you just talk to them. I'm too paranoid for that. But that was a beautiful story.
10:08 AM, September 25, 2008

Liz Dwyer said…
The Joy,
One of the things I do not understand about myself is that I have total stranger anxiety yet, if I get an alright vibe from people, I'll totally talk to them. I've met some very cool people but I also worry I'm gonna meet Ted Bundy one day.
12:00 PM, September 25, 2008