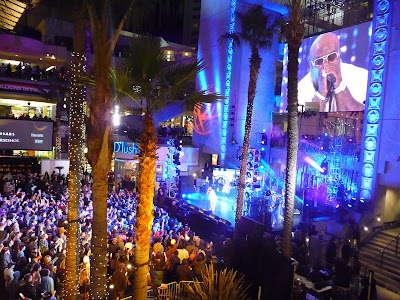 Last Thursday, March 1, 2012 will forever be known as the day I swore off Rock Star energy drink for all eternity. OK, not really. I did get a massive headache from drinking a can of that stuff but what this town is still buzzing over is Cee Lo Green and L’il Wayne taking over Hollywood and Highland as part of a national four-city concert celebrating the launch of Ceasar's Entertainment's Escape to Total Rewards loyalty program--a chance for folks to earn perks for taking a break and having some fun at dozens of fab hotels, restaurants, and resorts around the world.

While Cee Lo and Weezy set Hollywood on fire, Mariah Carey and Diddy owned the stage in NYC, Gavin DeGraw and Mary J. Blige brought the bounce back to New Orleans, and Maroon 5 and Sarah Bareilles rocket the crowd in Chi-town.

I and Mr. Los Angelista watched the concert here in Los Angeles from the Total Rewards VIP Lounge, which had luxurious sofas and plenty of tasty treats--YAY for cheesecake pops!--and the aforementioned Rock Star Energy Drink that I should have stayed away from.

After a hilarious video introduction of the Total Rewards program by Jimmy Kimmel--he visits prisons and tortures the inmates with his explanations of all the cool places you can go--L'il Wayne (and his skateboard) took the stage!

It wasn't long before Weezy had his shirt ripped off as he spit rhymes. I'm still chuckling over his apology to the crowd for his seriously NSFW lyrics--he actually told us that he doesn't know the lyrics to the "clean" radio versions.

But as much as I cringe at some of the things Wayne rhymes about, I'll give him credit for one thing: I've been to lots of hip hop shows over the years and the man knows how to work the stage--he had no hype man to back him up, no gyrating dancers--he truly brought the energy and had the crowd worked into a frenzy.

In between Wayne and Cee Lo's sets, we were beamed to New York City to groove along with Diddy--my husband and I debated whether Diddy could get all the people he's collaborated with over the years together for one show. OK, Real Talk, I just want to hear Keyshia Cole singing the chorus on their duet, "Last Night"--live. After a few minutes of Diddy, we cut to Chicago where Sarah Bareilles had the crowd singing along to her hits.

Finally, it was time for The Lady Killer himself, Cee Lo Green, to take the stage--and he did in a hot pink suit, flanked by Vegas-style dancers. It was tough to get a clear shot of him from where I was because of the cameras, but that's called live TV, baby!
He started off his set with "Bright Lights, Bigger City"--Is there ANYBODY who doesn't love this song?

Of course, he also rocked a remix of his hit "Crazy" that sounded like it had a sample of "Planet Rock" thrown in. Really, the man turned Hollywood and Highland into CHURCH!

I was having a hard time not dancing--you see the sacrifices I make for you folks so I could get some video!
Cee Lo also shared that he's getting his own show in Vegas! His show "Cee Lo Green Presents Loberace" (YES, you read that correctly!) opens up at the Planet Hollywood Resort & Casino in Vegas in August. He definitely deserves it because he's great live.

Aside from all the music. It was awesome to say hello to Randell, winner of the Los Angelista "Plot Your Escape" giveaway. I am so glad he had a great time at the show.

Even though the concerts are over, the Escape to Total Rewards fun is JUST beginning. Over the next few months I'll be sharing info about some of the great perks available through the program--and Caesars Entertainment is giving away over 90,000 spectacular, money cant buy “Total Escapes,” including a private jet with your best friends to Vegas, Mardi Gras in New Orleans, a foodie extravaganza,  a backstage meet n greet with Celine Dion...and much more!

To win, just play the Escape to Total Rewards game--and because you know I love to hook you up, I have a special code just for Los Angelista readers that helps you gain more entries: 9YKCCW.


Disclosure: I am honored to be an Influencer for the Total Rewards brand. Material and/or financial incentives may be received as a result of my involvement.
Email Post
Labels: #PlotYourEscape Cee Lo Green Concerts hollywood Lil Wayne Total Rewards