Blogiversary Special: My 7 Fave Posts From 7 Years of Los Angelista 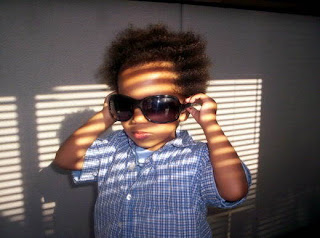 On August 19, 2004 I sat down and started this blog. Do the math: that was seven years ago--which means it feels like a completely different person started Los Angelista. I don't think I had NEARLY as much gray hair back then.

I also didn't really know "how" to blog. No one else I knew had a blog. There were no blogging conferences. Nobody was making money writing books on blogging. And so I just wrote.

As the years went by, I posted cheesy pictures of my sons playing "King Underwear Head," gushed about how much I love Depeche Mode, fangirled to the max after meeting Orlando Bloom, eavesdropped on my neighbors, and waxed poetic about my enduring love for chai.

I've questioned the existence of intuition, been accosted by crackheads looking for a hit, grappled with homelessness, taken the plunge into natural hair, rambled psychotically after my brother's suicide, and showed off my marathon running bling.

But if I had to choose some of my favorite posts--which is nearly impossible because there are so many that I dearly love--these seven would probably fit the bill. Here they are, along with an excerpt from each that I especially love:

1) Anonymous Black Man I'm Sorry: In this post from Monday June 16, 2006, I shared how on the previous Friday, I'd witnessed a well-dressed black man running down the street in downtown L.A. at rush hour. But instead of thinking he was just late for work, people started wondering out loud he'd stolen something or robbed someone. Because, you know, all black men running must be thieves.

"The rehab/gentrification of this city's core has been fascinating and gut-wrenching to observe over the past five years. Cranes loom over the streets, building wonderful lofts and luxury apartments for the elites that will be able to pay to live there. Still, knowing that business is booming and that FIDM students are riding the train with me, and walking southeast through downtown with me in the morning, I do feel safer. Not that the homeless gentlemen who hang out in front of the Olive Hotel have ever really done anything but smile and say hello. Well, once there was someone selling crack but I never saw him again. He was a clear anomaly."

2) Porches: March 14, 2007 found me in New Orleans in the post-Hurricane Katrina ravaged Ninth Ward...observing the remnants of porches and wondering about the people who'd once sat on them and what they'd seen.

"I imagine that once upon a time, in an existence not so long ago, some old lady sat on this particular porch in New Orleans' Ninth Ward. She probably admired the wrought iron on her porch railing and gazed up at the proud stature of the old oak trees that once stood everywhere. She probably spoke to her neighbors and inquired about what was going on in their lives. She might have read her Bible on that porch. I'm sure she contemplated all the dreams, desires and disappointments she'd had in her youth. I'd like to think she never got to a place where she accepted that the way things were was the way it would always be."

3) Reconnecting With Slavery: A trip to Chicago's Field Museum on July 14, 2008 found me and my two sons walking though a simulated slave ship that was part of the Africa exhibit. Things got very emotional. Both boys began crying and thought they were about to be sold into slavery.

The fear in their voices made me think about the fear that millions of African children must have experienced as they were forced onto slave ships. I couldn't ask my sons, "What are you afraid of?" because how could they not be afraid? They have not hardened their hearts to the complete blood-soaked and immoral horror that lays claim to our past. In their minds is neither the blase intellectualization of slavery nor an attitude that it all happened years ago so there's no reason to still talk about it.

4) It's Never Too Late For Racial Unity in Your Family: I still get emotional thinking about this post from July 20, 2009 about how my paternal uncle apologized to my black mom for the racist way my dad's family treated her, and my mom, amazingly, forgave.

"Unfortunately, my dad's parents did not accept their marriage, did not attend the wedding, cut off most contact with my father, and for many many years, that was that. They also told my aunt and uncle that if they attended the wedding or associated with my parents, they would cut them off.

Needless to say, the legacy of those actions, knowing that even when my father's mother died we were not welcome at her funeral, has been an incredibly painful part of my family's history.

But the wonderful thing is that families and people can change. There is no need to blindly imitate the racist or prejudiced traditions of the past. And there is always the chance to apologize, make amends and build something new."

5) No, You Can't Touch My Hair: Back on September 13, 2009, I wrote the post that got me vilified by thousands of people across the web last month. (Like, really? Two years later?) And no, you STILL can't touch it.

I couldn't go over to her and explain why her request was not OK. Why should I have to explain, especially when I feel like nothing I would've said would've made it right? The only thing that would've made it all better is if I'd said, "I'm sorry you're upset. Go ahead and touch my hair."

She wanted to objectify me and have me go along with her request, a request that smacked of racial superiority and privilege. But when I didn't like it, I became the problem.

6) A Ride Through Central Park With Patrick Abdul: August 1, 2010 found me writing about being in the back of a bicycle taxi pedaled around Central Park. And, because I'm nosy, I found out a little about my escort's life.

7) Greetings From a "Scientifically Proven" Unattractive Black Girl: I still find it hard to believe what passes for scientific research these days. May 21, 2011 found me reflecting on Satoshi Kanazawa's ridiculous claims that black women are perceived as less attractive.

"I've spent my entire life not having the right skin color, hair texture, nose or lips. I've refused to starve myself into some wack Eurocentric ideal. Most women's and fashion magazines don't have ladies who look like me on the cover. Or inside. Or in ads. Or on the back cover. Thank God my understanding of who I am doesn't come from the opinions of a society steeped to it's core in racism. If it did, I might believe some trumped up, completely subjective research about my alleged unattractiveness."

But what comes next?

At the very least, I know I'm not giving up my avatar. Mr. T looking cool in his sunglasses has served me well all these years. And, I'll keep going into year eight. I love writing, and I love this blog. Even if every post isn't The Absolute Bestest Post On Planet Blog, it's cathartic for me to at least put my thoughts, my words, out there.

Indeed, thank you to each of you who have visited this space over the years. Your comments make me a better person, and I appreciate you for it.

nick said…
Well, thank you, Liz, but I think it's also true that reading your blog has made ME a better person. I certainly understand a lot more about what it's like to be black and the extreme racism and denigration you have to contend with daily. And I know more about jogging, bringing up kids, the California schools crisis and a dozen other things you've shared with us. Plus you look so fabulous with that natural hair and all. I'm not deserting you any time soon!
2:01 PM, August 20, 2011

Liz Dwyer said…
Anne,
Thank you! I hope I'm around to have more come! :)

Nick
That's really nice of you to say! After all these years, you're practically like family so I'm glad you're not going away.

NYC/CR,
You're another one that's like family, too! Thanks and xo's.

sippinwineman said…
I believe we're all the better for existence in the blogisphere. Happy Blogiversary!!
11:34 PM, August 27, 2011