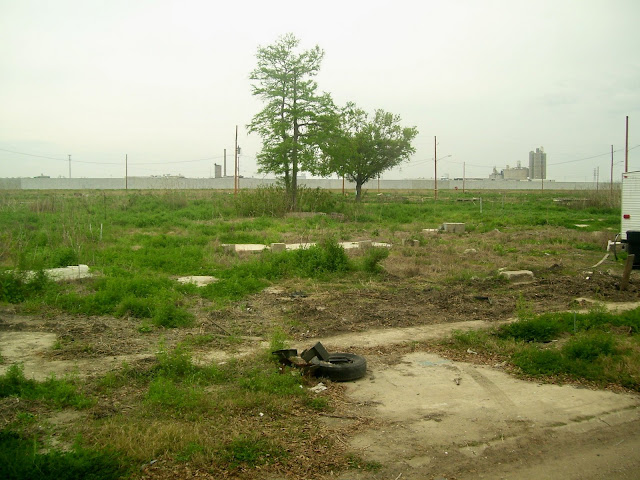 Sitting on the porch is an art that's mostly been lost in Los Angeles. I don't know about your city, but in LA, I rarely see a neighborhood busybody out on her porch, surveying the going-ons of everyone and their mother.

In the past two days in New Orleans, I've fallen in love with the way folks sit out on their porches. Porch size doesn't really matter. It only needs to be big enough for one, maybe two chairs. 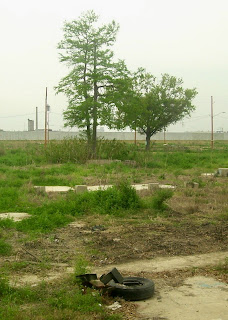 
How could our old lady have known that the levees, merely that concrete wall in the background, would be breached and her home would be destroyed? No fortune teller could have told her that the site of countless conversations and events in life would be reduced to mere remnants. What was once her home, her neighborhood, her heart, is now uninhabitable, a ghost town of epic proportions.

It makes me wonder, how would I react in the face of such devastation, such adversity? Could I respond with such courage? Could you?

Anonymous said…
This was extremely poignant, especially after reading the previous post about French Quarter revelry. It seems porches have been replaced with "gated communities" as our culture has become more private, suspicious, and exclusionary. To expand on your last question, I also wonder: how will the new anti-communities react in the face of disaster?
7:28 AM, March 14, 2007

Anonymous said…
good point, tk!
also, liz, i really loved this entry and the picture. i love how deeply you pondered the remains of people's lives.

can't wait to read more. i visited new orleans 2 months after the storm. it was odd to lay in a hotel room in the french quarter (1 of 3 hotels open at that point) at 10pm on a friday night in a MAJOR city and not hear a sound... too far from bourbon street to hear that action. it felt so empty. and going through the 9th ward and algiers i was struck by a number of memorable images. among them, peering in at family pictures still hanging on the walls and clothes hung in the closets of homes that felt like tv sets, because they were missing one external wall. and everywhere i looked something was out of place, which after 10 days became symbolic of the entire world being a mess.

anyway, i again, like how far below the surface your entry went and look forward to more.

Anonymous said…
Know how i said don't have a blog, you don't want everyone knowing your thoughts? Forget that!!! Your writing is insightful, moving and makes others think! Spent all afternoon at work reading your past blogs - I would have even if I wasn't getting paid at the time. LOL luv me
10:28 AM, March 15, 2007

Anonymous said…
I feel you. Up here in Chicago people do sit out back and out front on the south side in the summer time, however; when I visted down south (Mississippi and Tennessee) it was different, a much closer sense of community.
1:25 PM, March 16, 2007

Liz Dwyer said…
TK,
When I first moved to LA, I lived in a huge apartment building with around 200 units. Everyone was a total stranger. I never saw anybody. Now I live in a building with 12 apartments and I know maybe a third of my neighbors. I still don't why that is.

Kari,
It must have really been something to be here two months after Katrina. I'm seeing things after 18 months, when most of the debris has been cleared away...and it's still shocking.

Dena,
Glad that you'll be back. I've missed updates on what's going on with one of Chi-town's finest.

C-Smooth!
Happy to provide a distraction from polygraphing duties. Come back and see me again soon.

West,
Thanks. It's from the heart.

Noel,
Being here puts me somewhere else as well. It's going to be weird to come home to LA in a couple of hours.

Anonymous said…
I don't know what I'd do. As a parent and husband I pray that I would be the strong and courageous they'd need me to be.

Where I'm from we sat on our back porches and we could see all the neighbors from there relaxing and chatting. The good ol' days.
6:58 AM, March 18, 2007

Irshlas said…
I found your blog via Anti-Racist Parent and will definitely be visiting more often. Imagine my surprise to find your most recent topic.

East Biloxi, Mississippi was my hometown. I wasn’t an old lady myself, but I definitely was one of those folks “on the porch.” I lived on The Point, the oldest community in Biloxi, and arguably the most diverse. It was one of the remaining areas where black, white and Vietnamese families all lived side-by-side. Our narrow streets were lined with old shotguns homes built in the ‘40s. Everyone had a porch, either big or small, where folks would congregate. I can’t tell you how many summer evenings I sat on my porch until well after the sun went down. My husband and I would sit with our sweet tea, or maybe something a bit stronger, and watch the neighborhood go by. Sometimes we’d play cards; sometimes we’d talk. Neighbors would come over to have a cold drink and just “catch up” on the neighborhood gossip. Children would ride their bikes until their mothers called them home. And yes, you knew the children by name. Our porches were our meeting places. When the old ladies didn’t appear on their porches, we knew something was wrong and investigated.

Our neighborhood is now gone. Swept away. Nothing but ruin remained and the city carried it away in dump trucks. Now there’s nothing but a great expanse of dirt, dotted with a few lonely FEMA trailers. There’s no “recovery” in our neighborhood. No money to rebuild. No insurance. No grant. The old ladies have moved on, who knows where. I agree with you that a spirit remains now that they, and we, are gone. I can’t stand on my property without crying even after 18 months. I can still picture the houses and the people... on their porches.
10:03 AM, March 20, 2007

Liz Dwyer said…
Dear Irshlas,
Your comment made me cry. I'm so sorry. It's just wrong that more Americans don't really know what's going on for you all. It's so immoral that our government seems to have abandoned you all as well and has allowed the insurance companies to twist their way out of compensating folks as they deserve. The fact that folks are scattered to the winds makes me think it can never go back to the way it was. I hope you have taken your sense of community and neighborliness to wherever you are now living. Surely, the rest of us can learn from it.
8:52 AM, March 21, 2007