Does Your Child's Teacher Have a Second Job? 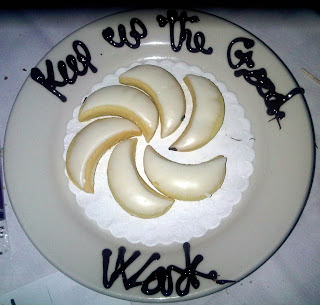 If you think your child's teacher chilled on the beach all summer, tanning and reading chick lit paperbacks, you might want to talk to the restaurant server my family had this evening.

We went to dinner because my sons rocked the house on California's state standardized test and I think it's important to do something special to recognize their accomplishment. And, because I believe in publicly acknowledging their grades, I told our server why we were at the restaurant.

He immediately offered his congratulations and shared that he is a fourth grade teacher at a charter school. Waiting tables is one of his summer jobs, and he doesn't quit doing so once the school year begins.

I'm not surprised. It's pretty impossible to survive on a teacher's salary if you live in a major city and you're only in your second year in the classroom, which was the case for our server. Over the years I've known plenty of beginning teachers who left their school in the afternoon and then headed to a second job waiting tables--or working at Macy's.

No teacher should have to do that. Why is it that our hearts are so hardened as to think teachers don't deserve to have decent pay and benefits? I really don't want the person charged with educating my child to be stressed out about paying bills to the point that he's spending his nights waiting tables.

As for this server, he truly wanted to recognize my two son's achievements, so he generously hooked them up with a free appetizer--fried zucchini--and then surprised them with this lovely dessert. It was an incredibly sweet and generous gesture.

"Keep Up the Good Work." Sure, my sons need that message, but so do all the excellent teachers out there. Not all of us think that you're lazy, good-for-nothings who simply became teachers because you're losers. You're not, and I wish you didn't have to have second jobs.

nick said…
It's a disgrace that any employee has such a low salary they're forced to moonlight somewhere else to top it up. Apart from anything else, those workers are going to be exhausted and liable to make mistakes. Teachers in particular should have respectable salaries seeing as they're doing just about the most important job there is - preparing the next generation to be employable and live satisfying lives.
4:08 AM, August 29, 2011

Lisa Blah Blah said…
Hey, we just got our test results back too! We went out for gelato. :)

I hate that our teachers get such short shrift. So many of them just love their jobs, love the kids, and burn out from the complex demands of working so hard at making ends meet. Nice that you recognize this hard-working (and very sweet) guy here on your blog!
2:37 PM, August 29, 2011

Anonymous said…
What a timely post on the first day of school! :-)

I'm already thinking about what to do next summer and vacillating between going to professional developments and taking what little pay they offer, or going without pay and hoping to rack up enough hours to qualify for a salary increase.

Another thing a lot of people don't know is that plenty of teachers get paid rarely, contributes to needing a second job. I work in Oakland Unified, and our first check doesn't come until September 30th. And we only get paid once a month. It's pretty hard unless you have tons of savings/a rich uncle.
6:00 PM, August 29, 2011

adoptive mom said…
Wonderful post!!! I was a teacher who moonlighted as a tutor (an additional 20 plus hours) and worked at summer camp and still never made enough to cover basic bills and got into debt for crazy things like groceries. Now people ask why I don't go back to teaching? My response is that it doesn't pay enough to put my kid into daycare and look after other people's kids instead...sad but true... plus, I'd much rather have a tighter budget but get to spend time with my baby and see her milestones- I am after all, dealing with a budget :)...thanks again for posting this one!
12:14 PM, August 30, 2011

BBJ said…
The first few years of teaching is like having two jobs anyway, what with the learning curve, the stress and the GRADING and PLANNING.

Creating a situation where they also need an actual second job...ridiculous.

anjeee said…
wow, what a bittersweet moment. i feel deeply for the teacher/waiter. that really made me feel sad. like Nick said, it is a disgrace. my children's teachers are such an important part of their lives, and we try and recognize them as often as we can.

what a wonderful treat for your son, though... obviously a teacher who REALLY cares about young people, and a Mommy who goes out of her way to recognize his achievements.

and congratulations to your son. my two do exceptionally well in school as well, despite great difficulties we have endured... daughter in 4 AP classes in high school, son just entering high school, both with straight A's... i tell them often how proud i am of them (and like you, enjoy telling others about their achievements in their presence), but i need to show them with actions more often. thanks for the inspiration.
9:18 AM, August 31, 2011

K. Rock said…
My husband is a first year teacher but with 2 incomes, I doubt he will HAVE to take a second job. We are fortunate enough that he can take a summr job is he wants to. I could see it being difficult for someone alone, or even worse if you have kids.

The only teacher I ever saw outside of school was our high school guidance counselor who you could find, without fail, working every summer in...Macy's
12:59 PM, August 31, 2011

Anonymous said…
Good post. Shocking really.
Having a second job in a complementary way - perhaps as a musician - or in some way enhancing your life and probably your teaching too is great.
But teachers need winding down time, thinking time, homework marking time, course designing time, imagining time - that's how they'll be good teachers for our children. Cutting corners on education by forcing them out to second jobs is short sighted for society.
3:52 PM, August 31, 2011

Stephanie said…
I am so grateful for the comments here. I am a second year 4th grade teacher in Utah. I was trained in California but was forced to teach out of state due to the lack of available jobs. Our salary is currently frozen. No one (other than the teachers) seem to care about this. We do not get very much support.

Everyone seems to believe that we have it easy. The general opinion is that we get paid to much, don't work enough hours, and get summers off. They have no idea how much work goes into this career. I ALWAYS bring home work (lesson plans, grading, etc...) I usually work from the time I get home at 4pm until 10pm on all of the stuff that I couldn't get done at the school.

As for the summers, most teachers either work another job or try take professional development courses. At the very least, we are trying to get ready for the upcoming school year. I have been very fortunate to make just enough that I didn't have to take a second job this year. But money is always on my mind. I am almost never willing to spend money on anything but the necessities. It allows me a little time to try to cope with all of the struggles of being a newer teacher. I feel for the teachers out there (and there are many) that are not so lucky.
10:59 AM, September 17, 2011