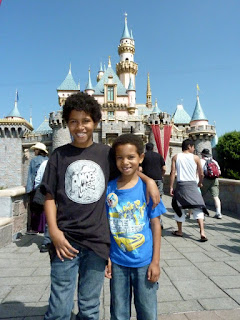 "Disneyland's soooo awesome. I wish I lived there."

My seven year-old Mr. T wants to move to the House of Mouse. I feel the same way. You ever notice how CLEAN Disneyland is? No dirty dishes in the sink, no stinky socks on the bathroom floor, Mickey Mouse-shaped pancakes ready to be eaten by the dozen... sign me up!

Mr. T wanted to go to Disneyland this past weekend since Friday was his birthday, but I couldn't swing it schedule-wise. Besides, we just went there a week ago! The park generously hosted us for both a Halloween Time overview - a what's new at Disneyland and California Adventure event- and Mickey's Halloween Party.

Going there at this time of year is one of my favorite things since the park is amazingly lovely for Halloween - it seriously feels like fall in a small Midwestern town. I love that. SO, here are our top 5 reasons Disneyland (and California Adventure) are awesome at Halloween!

1) The Evil Queen: Forget about Snow White! The Evil Queen's so misunderstood! At Halloween she gets to stroll the streets of Disneyland and tell her side of the story - and she didn't even try to feed my boys any poison apples. Maybe that's because we told her we were voting for her in Disneyland's favorite villain contest. Go vote for her! (Don't let Maleficent win!) 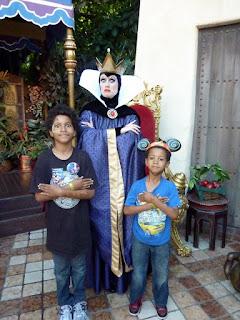 2) Tower of Terror: I'm a big Twilight Zone fan but riding the Tower of Terror over at California Adventure is a real test of my bravery. My husband refuses to ride it at all because he hates drop rides. This time around, my eldest, Mr. O, turned into fried chicken, so it was left to me and Mr. T to engage in some hardcore screaming - me screaming like Jeffrey Dahmer was sizing me up and T screaming, "This is SO awesome!!!" -- I also have no idea how people film during the ride, but this video gives you an idea what it's like to endure experience the Tower of Terror.

3) Ghost Galaxy! Space Mountain gets a spooky transformation and a terrifying ghost "chases" you through the ride. My boys rode in the front and neither of them look super scared. Mr. O looks like he's at a rock concert and T looks positively serene in this photo. Like he wants to take a nap, or like he's thinking about eating celery. Me? I'm just holding on for dear life! 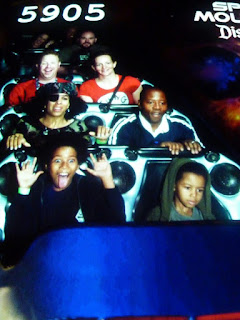 4) Trick-Or-Treating: I highly recommend you head to Disneyland on either Tuesday or Friday this month (or on Halloween) and attend Mickey's Halloween Party. You have to get special tickets for it, but it's really fun to trick-or-treat at Disneyland. There were no costumes dripping blood. No sexy nurse outfits either. Just lots of family-friendly costumes. My boys dressed up as Batman and Blade. (But they got a little cold so the sweaters came out.)

You're going to come home with boatloads of candy. I think I heard that there are 72 candy stations around the park and I think my boys managed to hit up every single one. So did I. 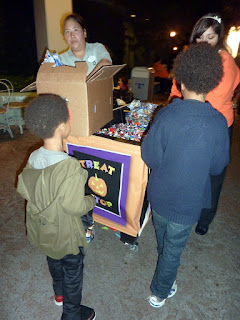 Yes, adults get to trick-or-treat too. Here's me in my costume! Am I a pirate? A gypsy? I don't know but it took five minutes to pull it together! 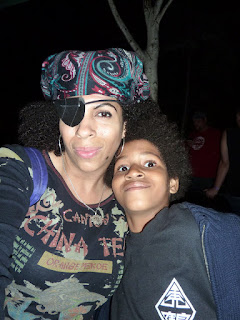 My babysitter suggested I do the 80's Flashdance thing for Halloween this year, but it's kinda fun to draw a big black mole on myself.

The other nice thing about Mickey's Halloween Party is that if you go to it on a Friday night, the park is open till midnight - meaning that after the fireworks, the lines to ride favorites like the Haunted Mansion or Pirates of the Caribbean aren't too long. We smashed a LOT of fun in between 10 PM and 12 AM! Granted, I was completely exhausted at the end but being the very last people to ride POTC was seriously cool.

5) Your Kids Will Say You're The Best Mom Ever! Yes, they will. And they might make you cry because they're having such a good time and they're so happy. 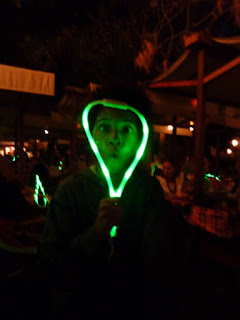 Seriously, I always tell my boys that the only reason they're even at Disneyland is because they have excellent grades, outstanding behavior and are helpful and thoughtful world citizens. And I keep hammering that message home. Disneyland's the ultimate positive reinforcement for the behaviors you want!

Thanks again to Disneyland for inviting us and showing us such a good time. Many good memories were made... and we still have LOADS of candy!
Email Post
Labels: costumes Disney Disneyland Halloween kids Mickey Mouse Mr. O Mr. T Pirates of the Caribbean