The Randomness: Featuring Freaky Malik From Harlem and that HORRIBLE Nelly Song.

It's the Friday before Halloween! That means I need to get my Flashdance costume together. Yes, I said Flashdance. How else can I can justify singing "He's a Dream." over and over?


What, you thought I was gonna post that "What a Feeling" song? Pfft! That was played out in 1984. Now, on to more important things... 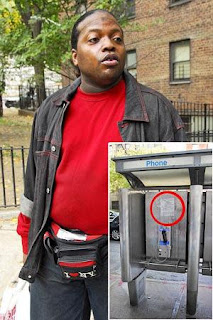 1) Los Angelista PSA of the Week: If You Live in NYC, Don't Date This Fool Named Malik!

What kind of hot mess puts up flyers on phone booths looking for "big-chested, curvy, leggy, voluptuous (NOT FAT)" woman -- or women -- age 21 to 45, willing to take turns paying on date (NO GOLDDIGGERS!!!!!)"?

And thank God he doesn't want any black women. Guess what, homie? We don't want you either!

2) Mariah Carey Has an Eggo in Her Preggo: Yawn.

Even though Mariah is "big-chested, curvy, leggy, voluptuous" there's need to go on Maury Povitch. Malik is NOT the father. (we hope)

Can't you see it now? The baby's gonna be born with a sparkly butterfly tattoo on its forehead.

3) What is wrong with Carlos Irwin Estevez? Oh, wait, I know the answer to this one... Drugs! Someone call Dr. Drew or that "Intervention" show because Charlie Sheen needs help! Face covered in cocaina? Hookers in the bathroom? Um, no, Charlie. That's not the way to go.

4) Or Maybe Charlie Just Hates That Nelly Song: Yeah, Sheen probably lost it because he heard that horrible "Just a Dream" song by Nelly one too many times. Every time it comes on the radio, the assault on my eardrums feels like a nightmare. Talk about falling totally off as a rapper. Ack.

4) My Child Acted a FOOL at the Dentist: Yes, if you saw a child crying and hyperventilating on Roxbury Drive in Beverly Hills yesterday afternoon, that was mine. He needed to get a cavity filled and it did not happen because, "I want to do it but I'm scared. It's gonna hurt!"

The cavity did not get filled and I might not let him go trick-or-treating because he was seriously clowning. Screaming all up in the office, "No! I can't do it! I can't do it! I'm scared of the needle!" Good grief!

5) I met Afrobella and She's Beyond Awesome: 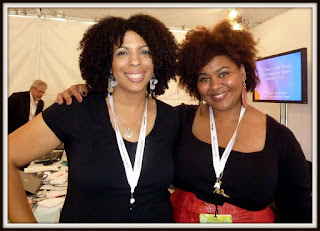 I met her on Tuesday at the California Women's Conference. I always like it when folks you only know virtually are real and genuine in person - and it's so nice because even though you're just meeting them, you feel like you've known them forever.

I want her hair color. I want her belt too. And her earrings. In fact, just clone her whole outfit and pass it my way!

I can also say beyond a shadow of a doubt that even if she wasn't married, Afrobella would also NEVER date Malik! 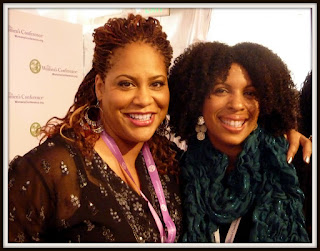 How awesome, right? And guess what? Kim reads this blog! Wooow. I'm still blushing over the fact that she knew I'd run a race even though I was sick. We also had a great convo on what it'll take to make Hollywood more diverse. Gosh, I love her.

What a relief when a celeb turns out to be normal, nice and not trashing hotel rooms. Charlie Sheen needs to take notes from Kim.

7) I'm Doing NaNoWriMo Again: Yes, National Novel Writing Month. The goal is to write 50,000 words, which is about 175 pages, by November 30th. This is not about editing or overthinking - two things I do WAY too much of. This is solely about writing and getting it DONE. I've attempted this before and I always do well till Thanksgiving. We'll see how this year goes.

8) I'm Doing NaBloPoMo Again: This woefully neglected blog needs a shot in the arm. So I'm doing National Blog Posting Month - meaning I will post something here every single day in November.

9) I'm Doing a Detox Program: A friend asked me to do it with her and I agreed to support her. I still can't believe I agreed to do this but for the entire month of November, I can't eat sugar, dairy, caffeine, wheat or processed foods. No chai. No Earl Grey tea. I'm going to do my best -and I don't know if I have to give everything up all at once or what - but whoa, this is gonna be hard! And I'm eating as much Halloween candy as I want to this weekend.

Yeah, I'm trying a lot of new stuff in November. Might as well get it done before my birthday in December.

mosaicmama said…
i had to give up dairy to see if it was causing my youngest's eczema. i found some great recipes on this blog : http://blog.fatfreevegan.com/
i can't ever give up coffee and i don't want to depend on soy so i tried a coconut milk creamer. it did not do it for me. i was told there are some nut milk creamers and cashew based seemed to be the most popular. dairy wasn't the culprit so i went back to half and half before i could try the cashew creamer. and i use stevia instead of sugar and it's my favorite sugar alternative so far. good luck!!
11:32 PM, October 29, 2010

Liz Dwyer said…
Mosaicmama,
Ooh! I forgot about Stevia and Agave. I wonder if those count as "sugars" on this program. I'm not sure. Thanks for the link to the recipes. I think I'm gonna need those!
3:02 PM, October 30, 2010