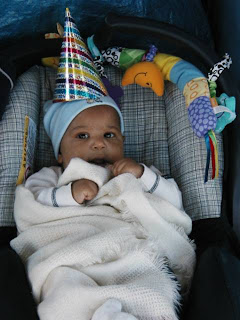 It feels cliché to ask where does the time go, but seriously, shouldn't this kid still be looking like the chubby cheeked baby he used to be?

He's so big, it's a struggle to pick him up. I have to squat and heave him up into my arms. Fortunately, he doesn't think he's too big for hugs and kisses - this morning he wanted to snuggle with me, and I let him because pretty soon he won't want to do that anymore.

Unfortunately, the snuggling didn't last too long since his older brother, Mr. O, chased him around the house to give him a "birthday wedgie".

I minded my own business while the boys squealed and tussled on the floor. I'm still not 100% sure if the wedgie actually happened or not. 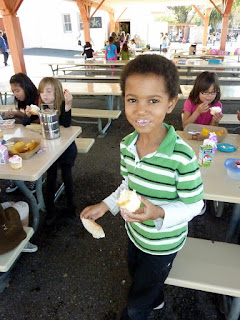 We surprised T at lunch with cupcakes for him and the rest of his class. The look on his face was priceless - like he couldn't believe it was all for him.

Ever the gentleman, he immediately stopped eating and began distributing cupcakes to his classmates. I felt so proud of him that be understood that even though we were celebrating him, he was, in some ways, the host.

No, T's not a tiny baby anymore. He skateboards. He does Michael Jackson dancing imitations. He loves Santa Barbara and San Francisco. He wants to go the beach all the time and he'll play any sport he can.

He wants to move to Disneyland --he likes Disneyland so much he's started collecting Disney trading pins.

He also tries to act tough but he's incredibly tenderhearted and sensitive - and he loves to laugh!

As the years march on, he's going to change, grow and develop in so many exciting ways. As much as I sometimes want time to stop, I can't wait to see who T becomes. Happy Birthday to him.
Email Post
Labels: Birthday kids Mr. O Mr. T

Sarah Auerswald said…
Still adorable even though he's not a baby - I am sending belated happy birthday wishes to Mr. T! And if I can ever help him move into Disneyland, I promise I will.
6:31 PM, October 09, 2010

1969 said…
Happy Birthday to Mr. T. The owner of the best eyelashes on the planet.

Liz Dwyer said…
Nick,
Thanks for the good wishes! He's definitely all about discovery - and there are so many wonderful things to discover these days.

Jameil,
Aww, thanks! He definitely had a wonderful birthday weekend.

Sarah,
I think Disneyland should hire me to live in Sleeping Beauty's castle and live blog it! ;)

Jasmin,
How nice that you all had such a fabulous bash for your mom! That's so great. Thanks for the bday wishes for T!