How To: Run a Half Marathon in the Morning & Party With Depeche Mode at Night 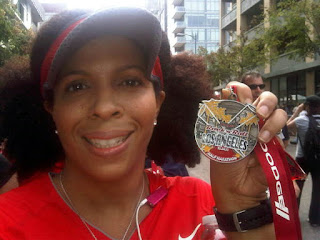 Ever wanted to run a half marathon in the morning and then go party all night in four inch heels? Of course you do!

On Sunday morning I ran the inaugural Los Angeles Rock-n-Roll Half Marathon. That night I drove down to Orange County to ex-Depeche Mode member Alan Wilder's show for his solo project, Recoil.

Follow my quick and dirty tips and you too can make it through 13.1 miles, even if you're recovering from the flu and still have a fever, and then go party till two in the morning.

Tip #1 - Be Insane and Determined: As my friend Robert says, the combination of insanity and determination works for Sarah Palin, so why not the rest of us?

I freely admit there were several moments during the race that I felt dizzy and disoriented, and yes, at one point I considered flagging down an ambulance. People who are sane think rationally about the long-term effects on their health. But if you're crazy and determined, you just keep thinking about how much it would suck to have to tell people, "No, I didn't finish because I didn't feel good. No, I didn't get a medal."

Tip #2 - While You're Running, Pretend You're At the Club: I love to dance and in my world, running is the same as dancing because it gives me an excuse to move my body while listening to great dance tracks.

While I was running, I hallucinated that it was 1997 and I was back home in Chicago dancing six feet off the ground on a platform at the best nightclub of all time, Shelter. You also have to pick hot tracks to run your last mile in. I crossed the finish line listening to "Fire in Your New Shoes" by Kaskade featuring Dragonette. This remix certainly brings the former club kid outta me:


Tip #3 - Think of Martin Gore: I like to think about Depeche Mode's Martin Gore. I think about how one day we'll meet and I'll probably be so awestruck that I will make a complete fool of myself.

In all seriousness, the man can do anything. He's like electronic music's answer to Prince. Martin sings like an angel, he writes amazing songs, he plays multiple instruments, and he DJs. Aaand, since I knew Martin would be DJ'ing at the Recoil show. I told myself, that I had to get through the race and no matter how tired I felt, I had to drive the 45 miles to Santa Ana to see him. His set was awesome and I loved how much he was visibly enjoying himself.


When I get to be 49 years-old like Martin, I fully intend to be rocking it just as hard. 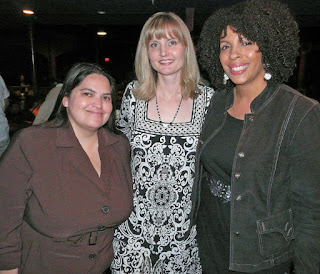 Tip #4 - Get to know Depeche Mode fans: There's no nicer group of people in the world than Depeche Mode fans. We only know each other from going to shows and talking online but we love each other because we love our band. Seeing other fans really made my night!

Here I am with Melissa and Stephanie and wow, we had fun!

So you see, all you really need to do is become a Depeche Mode fan who's determined, slightly insane and likes to run, and you too can have the time of your life!

nick said…
"Insanity and determination works for Sarah Palin, so why not the rest of us?" I like it. In fact I think a lot of us only get things done through the same mix.

Melanie said…
Congratulations! Given how I'll you were completing the race AND going out make you my new personal hero. I can't do anything but moan and watch the tube when I'm sick.
8:51 AM, October 29, 2010