I'm Running a Half Marathon Tomorrow and...I'm NOT a Happy Camper

Bib number 15548 in the inaugural Los Angeles Rock-n-Roll Half Marathon. That's my number. 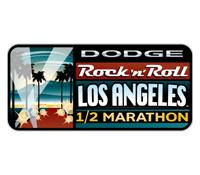 hat's my number despite my current body temperature clocking in at 99.4. If that's as good as it gets at this point, I'll take it.

I'm running despite barfing at work on Thursday and staying home on Friday. I even felt so horrible yesterday that I missed last night's performance of former Depeche Mode member Alan Wilder's solo project, Recoil. You all KNOW I didn't feel good if I missed something Depeche Mode-related. But I couldn't stand up for more than five minutes so I passed my tickets off to a friend just so they wouldn't go to waste.

Anyway, I just need to get through 13.1 miles tomorrow and I'll get a VERY cute medal. I saw them today at the race expo and after 2 1/2 -3 hours of suffering running, I'll get one. That'll make it ALL worth it.

Or at least that's what I'm telling myself because what really 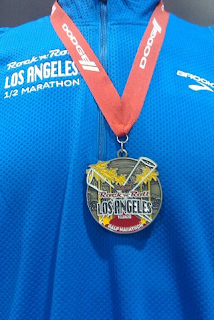 makes me happy in a race is that part where I get to see my family cheering for me, especially my sons. And no one's going to be cheering for me this time around.

At least, no one from my family - not my husband, not my two kids. My husband has to work, even though I asked him months ago if he could take the day off or switch his schedule with someone else, because, you know, it would be really important to me to have them cheer for me. Aaand, he didn't. Because he doesn't want to be married in 2011.

He said he'll take off when I run the full LA Marathon next year. Not for little races. Yeah, little 13.1 mile races with 20,000 people running them. Uh huh.

I called my babysitter and (bless her heart) she agreed to bring my boys so they could see me run and cheer for me - except their best friend's birthday is tomorrow and they really really wanted to go go-cart racing with him. They have to leave really early, before I get to a point in the race where they can see me.

I felt selfish saying, no you aren't going to hang out with your friend on his birthday because it's important to me, your mom -you know, the lady who bends over backwards to keep you boys safe, fed and happy-that you show up and cheer for me because it's not like I run a half marathon every day of the week. And I'm sick. And exhausted. And your encouragement means so much.

But every race is different. A new challenge - and just because I've done three marathons and one other half marathon, that doesn't mean tomorrow's going to be a piece of cake for me.

I guess I kept waiting for someone from my family to say, hey, wait a minute, this is really important to Liz so let's show up for her and support her. That moment never came. Maybe since this will be my fifth official race that I'm doing for a medal, it's really not that big of a deal anymore. Maybe I just need to accept that.

Or maybe I need to speak up more and say, yo, this is not cool and I don't know what you all thought but when someone in this family does something big, like run a half marathon, we show up for them. Period. End of story.

Jameil said…
Yes, you should speak up. If you don't, they'll never know and at the next half marathon you could find yourself in the same situation. I'll be there with you in spirit, Liz and I'm always proud!
10:12 PM, October 23, 2010

SoniaPatricia said…
Good Luck.I'm rather amazed and impressed by you, with a little bit of astounded tossed in. Your boys will not truly appreciate the example you set until they're much older. So don't feel too badly that they want to go to a birthday party now. Until then just maintain the standard.
1:35 PM, October 24, 2010

Liz Dwyer said…
Jameil,
Thanks so much for caring. It means a whole lot... and I got another medal!

Anon,
Thanks. I wasn't exactly feeling the love for a mother, but for sure, I can give it. ;)

Sonia Patricia,
Thanks for the good luck! You're probably right about the boys not appreciating it at this age. Not till they're on a track team or cross country team will they REALLY appreciate how hard it is to run long distances!