The Randomness: Featuring the Wackness That Is Drake & Light-Skinned Siditty Gals 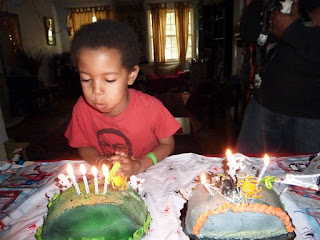 This weekend needed to be a three day weekend. How come Monday isn't a holiday? I wish I had the day off.

1) Happy Birthday Mr. T - Part 3: Mr. T had his third birthday party yesterday. Yup, three parties... and if you want to know just how spoiled he is, at this one he also had two Halloween-themed cakes - see how I spread his seven candles out across them! And he wore one of his favorite shirts to the party. (Yes, it's a Marvin Gaye shirt. No, he's never heard sexual healing, mmkay?)

2) Sleeping In: I didn't get up till 10 a.m. this morning. What a luxury it is to not get up at 5 a.m. - back in the day before I had kids, I slept in ALL the time. Little did I know how things would change!

3) Why I Don't Play Golf: Call it a freak accident but this man died after being hit in the head with a golf ball.

4) The Death of Hip Hop: Drake sucks. I feel sorry for all the people who think he's a good rapper. He's not. One of his overly bushy eyebrows could probably rap better than he does. Yep, he sucks. And so does Nicki Minaj. And that Waka Flocka Flame fool. Call me old if you want to... I just say I have standards.

5) Mad Men: Another season of Mad Men and the only new black characters we got were a mugger and a Playboy bunny. And then Carla got fired. Sigh. I think my dreams of Don Draper getting engaged to a sista are over. Instead, he got engaged to... Megan? What in the world?

6) Dumb People At Trader Joes: Earlier tonight I headed to Trader Joes to pick up a few things and one of the employees asked me if I needed help finding anything. I told him I did, and he then proceeded to tell me they were out of it and it was my fault I couldn't get it because, "Everybody knows you don't come here on a Sunday afternoon. We'll be out of everything."

He then proceeded to say, "You must be new to the neighborhood if you don't know to shop here on a weekday." When I told him I'm lived here for 12 years he says, "I wouldn't have thought it. You look like one of those real siditty light-skinned gals from back East."

Wow, gee, thanks. I had no good reply to that bit of madness. Nothing other than, "You're a dick!" - but I didn't say that. I didn't offer to cut out his tongue either.

7) Flashdance: I think I'm dressing up in one of those Flashdance-style outfits for Halloween. All I need is some leg warmers and a thrift store sweatshirt and voila, costume! What are you going to be?
Email Post
Labels: Birthday Black people Drake Halloween hip hop Mad Men Mr. T Nicki Minaj sleep Trader Joe's

Toni Campbell said…
As a light-skinned siditty gals from back East, I'm offended...and intrigued. Are light-skinned West Coast gals not siditty? I'm interested to know how he grades these things. LOL!
What is in your pheromones that people just say the craziest stuff to you? I think you are human truth serum!
6:00 AM, October 18, 2010

Carolyn (Diary of a Sewing Fanatic) said…
That dude must have been old because I haven't heard high siditty in a looooong time! *LOL* Did he have all of his teeth? Was he wearing a greasy jeri curl? Seriously?!
6:46 AM, October 18, 2010

1969 said…
I too am a light skinned siditty gal from back east. LOL

Did I ever tell you about the time this old man was in an elevator with me and said "Hi Redbone". EWWWWWwwwwww.

K. Rock said…
4. I think Drake is ok. But I really dont like Nikki Minaj either. But hip hop died a long time before these 2 came along.

nyc/caribbean ragazza said…
ha! People really do say the most off the wall nonsense to you.

Anonymous said…
I am delurking to say that I LOL at the "siddity" comment. High-larious as my friend would say. High-larious! I am assuming he was African-American, right? I read this outloud to my husband and we laughed together. By the way...he likes Drake! Yuck!
10:35 PM, October 18, 2010

nick said…
You should have said to the (siditty!) assistant, Then why do you work here on Sunday afternoon when nothing's in stock and you won't sell anything?
12:38 AM, October 19, 2010

Rose's Daughter said…
Ok, I thought I was the only one who does not like Drake, or Niki Minaj. I think the only reason people think either one of them is a good rapper,is because there is no one out there anymore to compare them to. And don't get me started on that Wacka Flocka fool. Hip Hop is dead.
12:51 PM, October 19, 2010

Liz Dwyer said…
So sorry - I replied to all your comments yesterday and they had the NERVE to disappear when I clicked publish. Anyway...

Toni,
I'd say West Coast gals have it on lock. ;) As for the crazies, I think I make people comfortable when I talk to them so they let it flow. Not sure if that's good or bad.

Carolyn,
He was a lil on the leathery side of things. I'd say easily 45+ - which isn't that old but he was no 25 year old. Plus, you know folks who have that lovely deep dark skin that doesn't show wrinkles? Heck, he could've been 55 for all I know. He did have all the teefers but he was bald headed. :)

1969,
LOL at Redbone. First time someone called me that, I had no idea what they were talking about and I was like, do they have a craving for ribs or something?

K.Rock,
Too true. It died even before Nas said it did. Yes, loose tongues on the rampage in Los Angeles! What to do, what to do! ;)

NYC/CR,
When he said it at first I was confused because I was like, um, I'm a what? I don't know if it's making a comeback or if he just spends waaay too much time watching School Daze at 2 a.m. in his Leimert Park apt.

Anon,
Aww, thanks for delurking! YES, a brotha originally from Pennsylvania. He also proudly shared, "I got Indian in me." Umm, yeah. Whatever makes you feel good about yourself.

Tell your hubby just say no to Drake, his wack delivery and his horrible eyebrows! Nooo!

Nick
I guess he works there to make me feel bad when they don't have the burritos I want in stock? ;)

Rose's Daughter,
You're not alone! And how long is Nicki gonna keep the crazy looking eyes going? You can't act like that you're whole career. I always wonder how long it takes to do her makeup every day.
12:47 PM, October 20, 2010