On Halloween a Cat Met Michael Jackson and the Wolfman 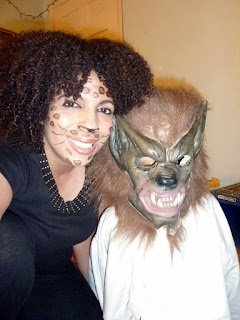 Betcha didn't know cats like to hang out with the Wolfman, did you? Or at least, this cat does.

Yeah, I had to ditch the whole Flashdance costume idea because I just could not spend $15 on a pair of neon leg warmers. Around noon today I figured I wouldn't wear a costume at all, but my boys were so disappointed that I wouldn't be in costume to take them trick-or-treating that by 2:00 in the afternoon, I decided it would be pretty easy to make myself up as a cat. I think it turned out alright. Meow!

Costumes aside, while we were out trick-or-treating. we saw the creepiest thing! There was an adult -no idea if it was a he or she- dressed in a very ambiguous costume. And "it" had a paper bag over it's head and was going house to house asking for candy. No joke, for a hot second there I wondered if things were gonna turn into a real life slasher flick.

Seriously, who in the heck does that? No one sane, that's for sure! 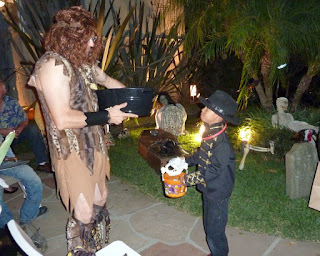 Fortunately, no slashing was to be found, and as usual, my boys had a great time. My youngest son dressed up as Michael Jackson, and he demonstrated his dancing skills on several doorsteps. The Wolfman got asked, "Do you howl?" And he happily obliged.

Michael likes all things chocolate, whereas the Wolfman prefers non-chocolate candies. They both came home with enough to satisfy even the choosiest sweet tooth.

All pickiness aside, I think I can confidently say that my boys had a ball this Halloween. As Michael Jackson said, "Too bad Halloween only happens once a year. Now I have to wait a whole year for it to come back again!"
Email Post
Labels: candy chocolate Halloween michael jackson Music