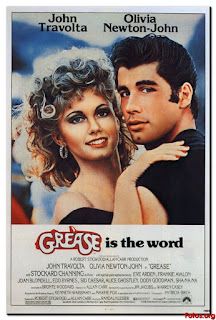 I just finished watching the last half hour of the movie, Grease, and, well, I have to say, the film annoys the heck out of me. I know it annoys me because of the lack of diversity in it.

Are there any black or Asian characters in it at all? And why the heck does the Latina girl have to be named "Cha Cha"? Come on! How stereotypical!

I say since remakes are so in vogue these days, how about a remake of Grease, complete with a diverse cast?

Steve: The Lightning Man said…
Sorry, Liz, but I can't participate. Not on grounds of race, or on grounds that it would be ruining a classic, but on grounds that I hate this effing movie. My wife watches it a couple times a month. I'm subjected to it as a punishment when I've spent too much time at the laptop writing.

See, to her it's this romantic piece of history. It came out before she was born. She just turned 29, having ben born in April of 1980. I however, am turning 40 this month and was 9 when Grease was released. I remember having to live through that crap on the radio; it's probably why I gravitated towards Depeche Mode and new wave synth stuff as an early teen. Bad musicals made me who I am today!
7:41 AM, May 03, 2009

KathyR said…
This was the first movie I ever walked out on. It is TERRIBLE and I don't understand the loooove some people have for it.

Having a rainbow of actors in this pile of crap could not improve it. I don't ever want to see this movie in any form again. Period.

Liz Dwyer said…
Steve,Ha! Thank you, makers of Grease, for disgusting Steve enough that he had an open mind when Depeche came along!

I'm not sure what made me open to falling in love with Depeche. Maybe my love of house music because there's a lot of synths in that? Anyway, I was lucky enough to never even see Grease till I was like 25. My mom always said it was a total crap fantasy of the '50s and that's not how life really was. When I finally saw the film, I could not believe that such a bad film has gotten so much hype over the years! But, aside from being a totally terrible movie, the lack of diversity bugs me every time. Let some other ethnicities share in the awfulness!

KathyR,I love that you walked out on it! Love it! Yeah, the message it sends to girls is, you need to sleaze it up to get the guy. At the end when Sandy turns into a girl that looks a little prostitute-ish, then Danny's all psyched and down for it. His makeover though? Oh, all he has to do is put on a letter sweater, which he quickly discards. Boo!
10:24 AM, May 03, 2009

sippinwineman said…
Re-casting "Grease"? I don't think so. Just because. Yeah, even "West Side Story" had some Blacks. (At the school dance).

Every generation seems to fall for the things that were. . .twenty years before. The 70s were ALL about the 50s. Then again. . .

Anonymous said…
I'd prefer the movie with anyone other than Olivia Newton John, so yeah, re-cast away. (Not sure it will save it though, it's an awfully silly movie.)
6:09 PM, May 03, 2009

heartinsanfrancisco said…
Why not? They did it with The Wiz.

Liz Dwyer said…
Sippinwineman,I've been trying to think of somebody to recast in this... and I'm drawing a blank. I just hope if it ever gets done that Beyonce doesn't get cast! Oh gosh, Three's Company! I saw that a few times and it was pretty funny.

Citizen,Not so sure it could be saved, either. Everybody thought Olivia Newton John was SO hot back in the day. All the girls in my grade school wanted to get their hair done like her.

Heart,I looove The Wiz! I remember the first time my sons saw it. They were SO excited over it. Now I want to go see a really good musical. It's been a long time since I've been to the theater.
1:06 AM, May 04, 2009

Jameil said…
i've never seen grease. lol@ mojo steve. i get REALLY vexed when i see stepin fetchit-type roles in classic films. i automatically give the films one rating lower on netflix the second a black person starts cooning. i, too, don't care about "the times." sidenote: word verification is crackwor...
1:50 AM, May 04, 2009

nyc/caribbean ragazza said…
The movie is silly but love the music.

I do think there was one random black guy in the background for "We Go Together".

Sandy? Rihanna..she can transform from good girl to bad.

The rival gang member with the jacked up face that goes to the dance with Rizzo? Lil Wayne

I hate those scenes, too. Reminds me of how Ferris Bueller is great... and then the scene with the black folks doing the Thriller dance just RUINS it!

NYC/CR,LOL, is there one brotha in that shot? Good point about Fame and Footloose. That bodes well for a Grease remake -- wonder who they'll get to rework the script for a modern audience. I don't know if, "A hicky from Kenickie is like a Hallmark card," is gonna still work. Do kids still give each other hickies? Ok, now I feel old!

Daniel said…
We get Jennifer Hudson as lead female.
I get to play opposite her.
I think I’d like that!

Elita said…
Rihanna isn't a good enough singer to belt out, "Hopelessly Devoted" so I am going to with Alicia Keys as Sandy. Megan Goode can play Rizzo and KeKe Palmer can play Frenchie.
11:49 AM, May 06, 2009

Lili said…
LOL! I am old enough to recall watching Grease numerous times with my big sis'. I am 36 now. We LOVED it! It was slightly naughty and so exciting - this fun school where the kids never had to do any work and spent all their time singing, dancing and hanging out at the movies. Though they all looked SO old. I remember Cha Cha Degogorio! She looked liked - 40!
Anyway, I kinda hate the movie now and would not pay to see a re-make but for the purposes of LA's question:
Sandy - Beyonce. All she would be required to do is sing. No actual acting)
..Just kidding. How about Estelle?
Danny - Chris Evans (Fantastic four- don't know if he can sing but I would change my mind and pay to watch him. Or Simon Baker)
Rizzo - Lil' Mama. LOL!
Cha Cha - JLo. Is that mean of me?
Kernicky- now why would anyone want that role?
4:50 PM, May 07, 2009

Lola Gets said…
Because her name was Cha Cha DiGregorio, I thought she was Italian. I dont care what anyone says, I still love this movie, despite all its unrealness, lol.