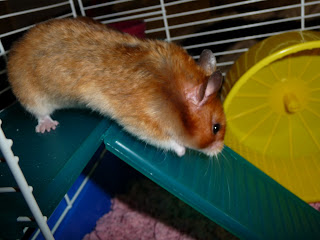 Meet Snips, the newest member of our family. Yeah, yeah, I know, the last hamster was also named Snips, but that one didn't even last 24 hours, so my five year-old declared that this one is Snips, too. (Trust me, there is NO arguing with a five year-old who has decided on a pet name.

My kids chose Snips because she was the fattest hamster at the pet store. They figured she was so big and healthy that there was no way she could die. I don't know about that, but for real, Snips is so fat, she's the size of 2 1/2 maybe 3 normal hamsters.

I'm looking at her right now and she is hunched over her food dish, nibbling away. I have yet to see her do anything other than eat, sleep and gnaw on the bars of her cage... before she goes back to eat some more. I feel like I should have "Baby Got Back" playing in her cage because she is SO fat.

You know, I think I'm a little jealous of Snips.

Not that I would like to be gnawing on the bars of a cage necessarily, but the way she is devouring everything in her food bowl, she is clearly free from all the insane angst about her weight that we Los Angeles ladies have. And I say Los Angeles specifically because when I go back to the Midwest, over half the population is fatter than me and looking just fine about it.

But in this town? I'm usually the fattest person in the room. I'm a plus-size the minute I drive west of Vermont Avenue and if I go west of La Brea, I'm definitely morbidly obese.

Snips, does have an exercise wheel in her cage, but not because she went to the store and bought it. I put it there, and I have yet to see her big behind get on it. I'm sure she feels absolutely zero angst over not working out since moving into her new digs.

Me? Let two days go buy without me working out and I'm gonna have a nervous breakdown. I'll start thinking I'm going to gain 50 pounds in a week.

I also highly doubt Snips is ever going to suffer through a Jillian Michael's DVD with me. I'll probably hear her nibbling on her food the next time I'm toiling through yet another round of backwards lunges.

Yeah, lucky her, she has no mirror in her cage so she never has to have that moment of shock where she says to herself, "Uh, does my butt REALLY look like that despite all the squats and lunges?"

Snips also doesn't ever have to step on the scale and pray that it's broken. And she eats every morsel of food all without writing her intake down in a food journal. No tracking calories, fiber, protein or sodium intake for Snips! No longing for cheesecake while saying to herself, "That's the caloric equivalent of a Big Mac, so I can't eat that."

I know, you're thinking, "Los Angelista, you're black! Isn't it supposed to culturally alright for black women to be, uh, bigger?"

Remember where I said I live? Los Angeles. The "you can have a little more bounce to your ounce because you're black" rules do not apply here, especially if you live anywhere near Hollywood.

Oh, wait, you weren't thinking that? You're thinking I'm totally insane for being jealous of a fat hamster? A hamster that may or may not be alive in this house at this time next week?

Anonymous said…
lol I totally get this.

Daniel said…
Los Angelista,
LOL! THIS is why I read you! This was great!

My girl has Mice! But them girls GO! At night, they’re spinnin’ that wheel so hard, it’ll wake me up. They’ve even figured out how up to 3 of them at a time can run in that thing. But they too really, really eat. And sleep. And run.

You are right though about Snips. It’s not really about appearance (though our completely self-absorbed society wants to make it so), but about life, participation and not dying like Snips will of a premature, unnecessary heart attack/stroke/you name it. Ever noticed all the things seriously overweight people Can’t do in life? I’d never want to be so self-limiting, by my poor choices and emotional inability to change that situation.

You know, that’s another really tough issue for the ‘black community’, especially among the young. Any ideas on this?

And YES, go do that run. You’ll like yourself better for doing it. And I don’t mean on the scale, but inside, emotionally. For being pro-active about your life.

Liz Dwyer said…
Lizriz,SO true, LOL! I have absolutely no angst at all about anybody back home seeing me! None whatsoever! :)

Daniel,Oh Snips was up all night last night, chewing on the bars of her cage! I feel a little bad for her because she is not getting out, no matter how hard she gnaws away on them! -- As much as I do wish I could eat whatever I want and as much as I want, that is just a recipe for disaster because I'd just be eating jellybeans and ice cream and Chicago-style pizza. I try to focus on the health stuff because a size just is not motivating enough for me over the long term.

When I was a little girl, my great grandmother was alive and I remember she was in a wheelchair and had no legs because of diabetes. I absolutely never want to feel like I am exhausted from climbing up a flight of stairs, or like I can't run for my life if I need too. I don't want to die from something that could have been prevented with a good diet and lots of exercise. This is a tough issue in the black community because some folks still see being 200 pounds as just being big boned. NO, that has NOTHING to do with bone size and everything to do with eating unhealthily and not exercising enough. -- And gosh, only 24 days till the LA Marathon!!!
1:15 PM, May 01, 2009

nick said…
Snips may think he's doing just fine scoffing everything in sight, but when he fails the audition for Hamster The Movie 3, then he'll be sorry, oh yes....

Unfortunately us humans have to take account of all those subtle (and not so subtle) social messages about our weight, our looks etc. But then we also have Culture, which dem poor hamsters are deprived of....
12:23 AM, May 02, 2009

Jameil said…
it will be a miracle if that hamster is still alive a week from now. sorry. you know your house is a hamster death trap. i wonder if they have some way of notifying other hamsters about your house. maybe she's eating b/c she has to do something to ward off the fear, may as well be food. i think you should put a mirror in her cage. give her a little of that angst. it would be fun! lol. it makes me a little sad that you worry about your weight. :( i can't say i'm completely immune but it still makes me a little sad.
10:18 AM, May 02, 2009

Shiona said…
This subject is hitting a little too close to home for me. I have the opposite issue of that I am too small. I may be close to LA but the guys down here prefer the more well rounded profiles. I too am sad to hear about your weight concerns.

Faith at Acts of Faith Blog said…
You gotta stop comparing yourself to size zeros who over-exercise and eat nothing but the equivalent of lettuce. Or worse are doing lots and lots of drugs (even the Rx kind) and have a plastic surgeon on speed dial to fit into that size zero. That's a big reason why I've held off on moving back. I don't want that being used against me and I'm so not going to hate myself.
11:43 PM, May 02, 2009

Liz Dwyer said…
Nick,Well, Snips the Hamswer has been wearing out the treadmill, I mean, exercise wheel, over the past couple of days! See, the cultural pressures are wearing off on her! -- I think a lot of the pressures are completely subliminal and I think they get to us all, whether we admit it or not.

Remnants,With the amount of food she's downing, I wonder about the pregnancy thing, but so far, no babies, and she's STILL ALIVE!!! WHOO HOO!

Jameil,LOL, day five and she's still alive! She is eating right now so that's a good sign. You know, I wish I didn't worry about my weight, but I do sometimes. 75% of the time I don't think about it at all, but that other 25% of the time, I'm very aware of it. Nowadays, I really have to watch what I eat because I gain weight really easily and have my whole life. I look at the older generation in my family and no one is in really really good shape and so I know genetically I really have to work at it. I know I would not feel that healthy if I was heavier if I am now and I want to definitely be healthy as I get older.

Shiona,I hope Snips lasts for a long time! You know, the thing is that no matter what we look like, our bodies always fall short according to somebody else's standards. That's just the way it seems to go. Sometimes it gets to me, sometimes it doesn't, but I tell you, watching that hamster chow down, it made me laugh and think about how I just can't do that if I want my clothes to fit! (And if I don't want diabetes, high blood pressure, etc! ;)

Faith,Oh goodness, the crazy things some folks do to stay super skinny in this town! Who was it that was just in some magazine talking about she lost 30 pounds of baby weight in a month all without doing ANYTHING, and I was just like, yeah, right, sure! Just LIES! Can't remember who it was but they are ALL like that. It's a little silly. As for me, most of the time, it doesn't bug me because I'm still amazed by all the great things my body CAN do, but sometimes, it gets to me. I guess that's the price of living in LA!
2:54 PM, May 03, 2009

Anonymous said…
Hamsters don't have to worry about their health because they only live a few years.
6:13 PM, May 03, 2009