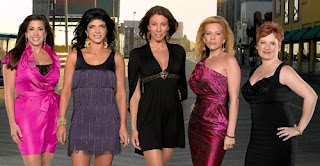 I hate to confess it but I'm sitting here watching Mafia Wives The Real Housewives of New Jersey.

One of the "housewives" is actually a divorcee and just got stood up by someone named Gucci something or another. She'd never met the man. They'd only had phone sex together.

Another of the wives just dropped some gems of wisdom by saying, "You don't want to become a mother and let yourself go."

And why is that?

"You should always be like your husband's girlfriend or else they're going to go out and get themselves a girlfriend."

Hmm... I guess that's why Eric Benet cheated on Halle Berry? Because she was just too motherish looking?

Besides, I don't know many mothers who've "let themselves go".

It's the 21st century and let me tell you the extremes the moms I know go to in order to stay in shape: They do yoga, run, go to Weight Watchers, do those insane Power 90x dvds and swear by Jillain Michaels. I know some who workout in the morning and again in the evening.

Why do they do all that? Because they want to keep up with their kids and they're too broke to buy new clothes in case the old ones stop fitting.

Seriously, I should turn this show off. These are not my housewives. I have yet to see them pick up a Lego or wield a mop. Plus, I don't know how many times I can take them saying, "Good old fashioned Italian family,". I'm not convinced there's anything "good" or "old-fashioned" with these folks. They may be Italian, but they're reminding me more of an episode of the Sopranos and less of my Italian ex aunt-in-law and her family.

Actually, I think there should be a Los Angeles version of this show featuring real women. Not women trying to flaunt their wealth, but real women.

Hmm... would I do it if they asked?
Email Post
Labels: Los Angeles reality shows TV what a heffa

Faith at Acts of Faith Blog said…
Haha. I saw the commercials and I thought WTF it's Sopranos 2009. Esp the one with the jet black dye job and how they talk about how they didn't go to college yet they have million of dollars. Doing what? And how? I thought the New York wives were ridiculous. I didn't even attempt to watch Atlanta but I somehow suspect they can't be nearly as bad...but I could be wrong.
1:45 AM, May 13, 2009

heartinsanfrancisco said…
I can't stand reality TV, and believe the trend is the producers' way to avoid paying big money to actual actors. Did you know that the entire cast of Friends, that abominable show with a laugh track, yet, which won't die, got ONE MILLION DOLLARS each per episode their last season? No coincidence that reality shows have bloomed since then.

Sharifa said…
I haven't had a chance to watch Real Housewives since the first couple of seasons from SoCal, but let me just raise my hand and be the one mother who doesn't work out. I think about starting up again, but with a hardly ever at home husband the opportunity just doesn't present itself. Well I try to do squats when E takes his bath and he tells me to sit down...
12:17 PM, May 13, 2009

Liz Dwyer said…
Faith,
Some of the Atlanta ones at east seemed a little more classy, and I actually like Bethenny from NYC. Can't stand any of the OC ones, and I think I only watched them once and got bored.

Cyndee,
It is a chance to escape but you know the dad of the brothers the two sisters are married to was found shot to death in a car trunk... so I'm just saying, "Mafia Wives"!!!

Heart,
Oh these ladies make the Cali ladies look seriously high class. Ugh, Friends... not with $1 million each per episode, but I think you are right that it comes down to not wanting to pay actors. Some of these reality folks are probably happy with a few thousand per episode.

Sharifa,
LOL, your squats keep you looking fabulous though! Hmm, I wonder if you aren't as caught up in it because you live outside the States.