Los Angelista at the Streamy Awards 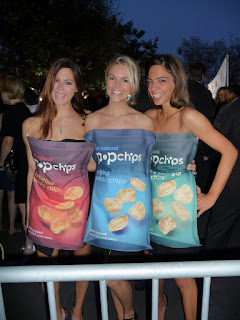 Last Saturday, (before I got ridiculously sick again with the mega-cold-on-steroids) I got all gussied up and attended the first annual Streamy Awards. I even broke out the liquid eyeliner and a dressy-dress since it was a real awards show with a real red carpet-- not the "You're So Awesome And Mommy Loves You SOOO Much Awards" that sometimes goes down here at the crib.

But who knew I could have come dressed up as a bag of Popchips like the ladies from Whatever Hollywood???

You see, the Streamy's honor the best in web television -- they're like the Emmy's of the Internet TV world. I guess you could say this is TV for nerds and folks who think outside the box. Of course, that's totally who you are. (Just admit it, otherwise, you wouldn't be here reading this nerd-tastic, Depeche Mode worshiping blog.)

Sure, you've probably heard of Dr. Horrible's Sing Along Blog starring Neil Patrick Harris (and it won big!), but have you heard of You Suck At Photoshop?

If you have always secretly believed that sorority girls are actually harboring deep dark secrets, there's Sorority Forever. Oh, and there's The Shatner Project... any guesses who stars in that??? (Hint: his first name starts with a "W" and his last name is Shatner.)

The best part about all these shows (and you can see all the nominees here) is that the episodes are super short, ranging between a little over 2 minutes to just under 10 minutes. If you're like me, you don't have time to commit to watching and keeping up with several 60 minute shows every week, but these web TV shows are a do-able length for anybody AND you can watch them anywhere.

How did I end up at the Streamy's in the first place? Well, I went as a guest of Kodak, the sponsor of the entire shin-dig! And, thanks to the Kodak folks, I had the chance to chat with guests using their brand new pocket camera, the Kodak Zx1. My first victim of my wanna be a correspondent on Access Hollywood was Kodak's CMO, Jeff Hayzlett. He was a good sport and answered my questions about kids and pocket cameras, how they tested the product and how Kodak hopes to work with moms.

That footage right there was my first time even holding the Zx1 and it held up pretty well in my amateur videographer hands! -By the way, the Zx1 so far is MUCH sturdier than my killed-by-my-children Flip. It has a weatherproof casing and, easy-peasy, all you have to do is push record.

Thank goodness it was easy because I also had a great chat with the ladies from Prom Queen about how non-actresses people in LA really do eat, and I loved talking with Justine from ijustine.com.

I felt so old because, um, Justine started her first web site in the 6th grade! Our chat got really interesting when she told me the weird questions she sometimes gets from viewers:


And just in case you think I only talked to the ladies, I also had a fab time talking with British actor Treva Etienne. Good thing I didn't know at the time that he was in Pirates of the Caribbean, because I probably would've gushed about Orlando Bloom like a total idiot. Instead, I just tried to convince him to move to my part of the city so my kids see more black folks around my neighborhood. (I'm so selfless, aren't I?)


I'm curious to see what the future of Internet TV has in store. There are some great shows out there but I know I'd like to see more diversity in both the casts and the stories. Will there one day be a show called "Gentrification" or maybe one called "Life in Compton"?

The cool thing is that pretty much anybody can decide to make one of these series. At the most basic level, you just need a camera and your ideas. Hmm... maybe I should make an Internet TV series? It could be about the best band on the planet, Depeche Mode, and the people who are obsessed with them...

Faith at Acts of Faith Blog said…
You are too funny. You could compile your video for a best of LosAngelista series though.
10:53 AM, April 04, 2009

Jameil said…
i left you a comment last night and it didn't post. :*( anyway i said i would pick the golden retriever. that is too much hair on my head and at least the former would be over more quickly. lol. no zx1 to giveaway? bummer. also, you know i love your blog but i wouldn't watch a depeche mode show. sorry!
1:47 AM, April 05, 2009

On a limb with Claudia said…
I love that you went, gussied up, even liquid eyeliner. I'd be to concerned about my age and weight then fain to not care about such vanity! HA!
9:25 AM, April 05, 2009

Tracy said…
Love those "Whatever Hollywood" Girls - have you watched their video Spray Tan Rap? It's better than watching SNL.
10:24 PM, April 07, 2009