Exactly two weeks from today, I'm going to be camping out on the uber-famous corner of Hollywood and Vine. And you know there is only one reason for your girl to do such a thing, right? 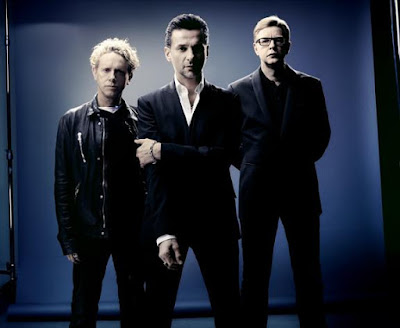 I will resist typing this in all-caps because I'm just SO freakin' excited but... Depeche Mode is playing a live concert on Hollywood and Vine!!!

Sorry, I couldn't resist saying that last part in all-caps.

Stuff like this is why I don't move my behind out of Los Angeles. You see, the Jimmy Kimmel show tapes out here in LA, and Depeche Mode is going to be a guest on the show. AND, because they're the best band in the world, they're gonna shut down the most famous street in the entertainment business, just for them to do a mini-concert.

It's going to be totally NUTSO!

The last time Depeche Mode did something sort of like this in Los Angeles, a record signing at a Wherehouse Records that used to be over on 3rd and La Cienega Blvd, here's what happened:

Are you wishing you could go to this show, too??? Guess what? You can... and it's FREE! Just go here ASAP and get yourself some tickets before they're all gone!

Go ahead, get those tix and we can scream, dance and cry (I've done it before at one of their shows) together!
Email Post
Labels: Concerts Depeche Mode I know you think I'm crazy after reading this Jimmy Kimmel Los Angeles my favorite things

Daniel said…
Los Angelista,
LOL! You CRAZY girl!
And I thought I was the only person that could be nutso/passionate about things.
It’s all good.
That is, if Depeche Mode doesn’t do like the Stones did years ago (at the old Ontario Speedway) and go hire the Hells Angels for Security.
They need something to hold you back. LOL!
10:35 AM, April 09, 2009

Liz Dwyer said…
Daniel,
LOL, I can just see them strolling around, flanked by some Hells Angels. Too funny!

1969 said…
You must be on cloud ninety nine right now. LOL

BZ said…
YAY! I'm happy for you! That reminds me of what happens when U2 comes to Boston, the most Irish city in the country. They decided to do a "surprise" secret show at a small theater. THOUSANDS of people showed up, just to be in the area. Insanity.

Nerd Girl said…
Have fun - I know you will!

Liz Dwyer said…
Shiona,
I'm already thinking of places I can hide a camera, just in case they say none allowed. I sure hope I can get some pictures! :)

BZ,
LOL, yeah, I have no doubt I'm gonna have a great time. (What to wear???) Oh I can imagine U2 in Boston. I've never been to a U2 show. I know a couple of people who are crazy U2 fans and they are over the moon that they're playing the Rose Bowl here in LA.

Anali,
I would probably totally pass out if I ever got the chance to interview them. I'd probably say, "You're my Michael Jackson!" and then faint!

Nerd Girl,
Yeah, that's Kelly Lange! I was in Chicago when that whole Wherehouse thing happened, but wow, I wish I'd been here in LA! :)

Jen said…
That is SO cool! And wow, the hair on that reporter.