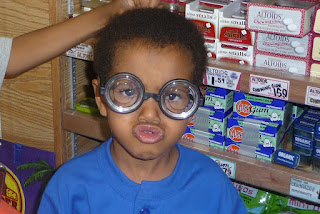 When I became a parent, I figured I wouldn't have to worry about my sons going girl-crazy till they hit puberty.

Pfft! I was sooo wrong!

My five year-old currently claims to have 279 girlfriends.

The latest addition to his stable of "girlfriends" is the teacher assistant in his kindergarten classroom. This morning she was walking into the school in front of us and he whispered to me, "That's Miss Alamillo. She's my girlfriend."

"No, that's your teacher assistant."

"And she's my girlfriend, too!"

"Does she even know she's your girlfriend?" I asked, surely rolling my eyes because I knew the answer he'd give.

"No, and you better not tell her she's my girlfriend. Don't embarrass me, mom!" Then he kissed me goodbye and told me he loved me.

I watched him shyly trail down the hall after Miss Alamillo, and he turned to look at me a couple of times, giving me his most blinding, most mischievous smile.

I swear we have this same conversation at least once a day, even if the object of his affection changes. Ask him to name all his girlfriends and he'll name off every single girl in his class and then say, "I can't tell you the rest because it's a secret."

But where does this girlfriend thing come from? Nobody we know is doing the mack daddy thing. The few unmarried male friends we have are all wishing they even had just one girl in the first place, let alone 279! They're always complaining about how there are no nice girls in Los Angeles. I guess they need to sit down and get schooled by my son about how to, er, rope 'em in.

Seriously though, I often wonder about the media messages that filter in, telling a boy, especially an African-American one, that part of his value is in having a whole bunch of girls, even if he can't remember their names.

My mind automatically goes from point A to point B with this. His little kindergarten crushes morph into him becoming just the sort of womanizing player I've hated my whole entire life. I picture multiple girls calling our home, each one thinking they're the only one.

I don't want him to have girlfriends. I just want him to develop himself intellectual, physically and spiritually... and then, when he's like 30 he can get a wife.

Do I need to keep him in those "nerd" glasses if I want that to happen? And why can't I just keep smiling about his multiple girlfriends while telling him he's too little for anything but girl "friends" in the first place?
Email Post
Labels: black children Boys kids parenting sexism

Cyndee said…
If he develops himself physically, emotionally and spiritually he'll attract the right kind of girlfriend. Well at least with those glasses he won't attract "Danger" from VH1. Yea keep the glasses!!!!
10:56 AM, April 21, 2009

1969 said…
Are you kidding? He's hot in those glasses....LOL, it's his eyelashes and killer smile.

Seriously, my seven year old is a girl magnet and he LOVES girls. *sigh* I don't know where it comes from.

I am mentally preparing myself for the phone calls, text messages and young ladies I find hiding in closets. *sigh*

Liz Dwyer said…
Kathy,He wore those glasses almost all day Sunday when we were at the mall and at Trader Joe's. The various reactions were very funny. Some people couldn't tell they were just gag glasses and were actually looking at him with repulsion. Other people just looked at him and burst into peals of laughter! He really liked that!

Cyndee,I'm always pointing out good behavior from guys toward women to him AND I also point out the ladies to avoid! We don't want any Danger-types coming around!

pooneh said…
does it make you feel any better that my 17 MONTH old boy looked at a pretty 3 year old girl at the mall yesterday, squealed his version of
'pretty' and started to run after her?

Jameil said…
lol. poor thing! he had no idea his mom would analyze it so much! i think he'll be okay. you guys are giving him plenty of positive messages, i'm sure of it! and 1969, that won't be enough to keep them away! you and liz will have to resign yourselves to having little girl magnets! lol.
10:39 AM, April 22, 2009

Liz Dwyer said…
Pooneh,He was running after her??? LOL! Oh that is funny! :)

Farid said…
LOL. I've just discovered that I am a grand father. My daughter in law is 9 weeks pregnant! I feel pushed one generation back. Its not a bad thing. In actual fact I see it as credit to my wife and me. If I were to share a simple comment based on experience, it'll be to gaze your focus on doing the right thing in bringing your child up (and I see you have that)and do not get distracted by some of the passing phases that may not mean the same to the child as it means to us adults. The child internalises parents during the childhood. That gives him the base of his character. Later on, he'll start externalising, as a natural phase, during his teenagehood. As long as the base is strong you'll have a higher chance for him to get through a lot of the things not so favorable in our society. I'll stop here before getting into deep waters. And, I loved your post.
3:44 PM, October 12, 2009