I Should Just Call This Depeche Mode Week 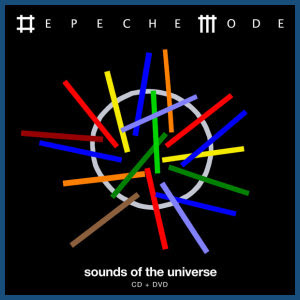 I really should. I should have just made some sort of official "Depeche Mode Week" sign to tape to my forehead. Because in my mind the answer to every question is, "Depeche Mode!"

Yesterday, their new album, Sounds of the Universe got released and on Thursday night, yours truly is going to see them in an outdoor concert on Hollywood and Vine! The city is shutting down Hollywood Boulevard around there from 11 p.m. tonight to 6 a.m. Friday morning. You know what else they shut Hollywood Boulevard down for? The Oscars!

Depeche Mode as big as the Oscars? Forget about TV viewership for a second and work with me on this. Work with me!

My logic, and yes I am using that word loosely, is that I have never seen 10,000 people on Hollywood Boulevard on Oscar Sunday to see another famous Brit, Kate Winslet, tell us who she's wearing, but a crowd of at least 10,000 people is expected to show up for this concert.

Sure, throw the TV thing in there... the Oscars have millions of people watching every year. Well, Depeche Mode has sold over 100 million records!

OK, you think I'm losing it. You're saying to yourself, "Los Angelista, you are one totally crazy heffa!"

I agree. Last night I couldn't sleep (and still have not -- that's why the word "insomniac" is in my profile) so I just, ahem, drove over to Hollywood and Vine around 1:00 a.m. to check out the scene where this concert is going down!

Who else but a totally nutso fan would drive down Hollywood Boulevard in the wee hours of the morning to see if, as reported on the official Depeche Mode Message Board, there were already people lining up for the show?

Yes, there were a few folks standing around close to the intersection of Hollywood and Vine. I'll describe them for you and then you can decide if they sound like a) nefarious Hollywood types or b) Depeche Mode fans.

The two women were wearing tight, extremely colorful shirts, booty shorts and high heels. They were "accompanied" by a man wearing extremely baggy jeans, a white t-shirt and a super oversized shirt, unbuttoned in the front.

If you guessed that those are the Depeche Mode fans, you're WRONG!

First of all, to spot us, look for black clothing, not colors, and I have never seen a Depeche Mode fan show up to anything in some booty shorts.

As for the males of the Depeche Mode species, I won't say they always roll with more form fitting jeans, but jeans hanging off your rump are not the business with the Depeche crowd.

What will I be wearing to this show? Some jeans and Depeche Mode shirt. And maybe my Depeche Mode track jacket too since it always gets cool in LA at night. I'll also have on some relatively comfortable non-stripper looking shoes. I mean, I have to be there no later than 5 p.m. and the show doesn't start till 8:00 -- so like I'd be standing out there 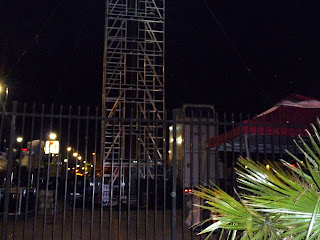 in some booty shorts and heels. Pfft!

Now that you're clear on what to look for in a fan, now that you know that we SoCal fans are NOT hookers or hooker wanna-bes, I'll tell you what I did see that was really fabulous: A crew putting up the STAGE!!!

I'm sure the guys out there working, setting everything up were probably wondering why someone was taking pictures of a stage set at one in the morning. Then again, if they know anything about Depeche Mode's loyal fans, they shouldn't be surprised.

Sigh. I'm probably gonna really lose my mind over the next 24 hours...

Faith at Acts of Faith Blog said…
You are tooo funny! My obsession for DM was tempered after I was fired from my PT job for leaving work early while my boss was on a biz trip because I won a contest to meet them. Well his jealous wife had something to do with it, but that was the reason he gave me.
12:17 PM, April 22, 2009

Liz Dwyer said…
Anonymous,Wow, you only have 31 days till a full show! I hope tomorrow can tide me over till August! :)

nick said…
We all get totally obsessed over something, and obsession can lead to the craziest antics. Checking out the venue at 1am? So what? As long as your behaviour's not totally anti-social, who's bothered? Enjoy!
1:17 PM, April 22, 2009

Liz Dwyer said…
1969,Oh the play by play will be coming on Twitter -- I'll try to refrain from staying stuff like, "I'm gonna pass out. They're sooo hawt!", but no photos because my phone takes crap pictures and they are gonna be very strict about cameras/video records. Dang it!
1:50 PM, April 22, 2009

Anonymous said…
I think your kids will want to read this post I saw on someone's blog, teehee:

Lisa Blah Blah said…
I was on Franklin Ave this morning and turned left onto Gower (going south toward Hollywood Blvd) and traffic came to a standstill. I was like, "What is going on?" and then I remembered, "Oh, Depeche Mode." And I thought of you and laughed, because I was wondering if you were already out there.

And then I busted a U by Hollywood Presbyterian Church and went around the long way to get back on Gower and get Viva to school. I hope you have a good time!
11:18 AM, April 23, 2009

Anonymous said…
Anyone who wears a "band" shirt (let alone a tee and jacket combo)to the concert of the artists they are seeing is hella lame. The venue is filled with fans...trust me they already know you like DM.
7:35 AM, April 24, 2009