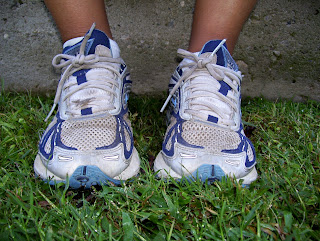 I ran ten miles this morning.

Let me pause for a moment to pat myself on the back for achieving such a milestone.

I'm not kidding. I really did just pat myself on the back for doing it. If you'd like to pat yourself as well on my behalf, feel free.

I know, last Saturday I ran nine miles, so if you're thinking, "Ten miles isn't much more," you're right. It isn't. But there's something significant about hitting the ten mile mark. Maybe it's about getting into double digits. Maybe it's a sign that there's no turning back from this marathon thing. I don't know, but it was a big deal for me.

I feel especially proud of myself because I was very nervous about my ability to complete this ten mile run. My training runs during the week were not so great, mostly because it was very hot outside and, when I think about it, I wasn't eating well. Then, yesterday afternoon I got a serious headache. I felt like I was being stabbed behind my eyes.

Despite it all, I woke up at 4:45 this morning, put on my running gear, downed two cups of Earl Grey and ate some peanut butter on toast. Oh, and I took some more Tylenol because my head was still hurting a little bit. Then I was out the door, headed into the foggy early-morning darkness.

I headed west on the 10 Freeway and in a mere 25 minutes, I was in Santa Monica, listening to the mentor of my pace group give us a pep talk. One of the things I know about myself is that I will fake it whether or not I think I'm ever going to feel it. I'll put on a brave face no matter what. But when I looked at the faces of my fellow novice marathoners and saw a mixture of fear and anticipation, exactly what I was feeling myself, I realized there was no need to fake that the run would be easy. If it was hard for me, that was ok because we were all in it together.

Even though it's my feet that ran the ten miles, it's technically not just me. It's the guy who puts together those FREE Podrunner podcasts on iTunes. It's my mom and sister being encouraging as I talk to them while driving to Santa Monica. It's the mentors in my pace group saying, "You're looking good!" as they run by me. It's the guy who runs next to me every week being willing to chat about everything under the sun and having his own struggles so I feel like I'm not alone. And it's the girl two people in front of me who runs in the booty shorts, every single week, ass all hanging out. She's endless comedy for yours truly. Oh, and it's the fog being especially thick this morning so I kept nice and cool. Thank you, fog!

The crazy thing is, after all the mental freaking out I was doing before I started, this ten mile run was probably one of my best runs ever. I got a little choked up at the end as I ran up that hill leading from the Santa Monica Pier. There I was at the end of my goal!

If I can do 10 miles, I know I can do 26.2. I'm sure it won't be easy, but I'm not in it alone.
Email Post
Labels: about me achievement goals los angeles marathon Running

What an accomplishment, and how great that you have wonderful support, too.

Liz Dwyer said…
1969,
Aww, thanks! Never thought I'd be doing more than two or three miles... you never know, maybe you have a marathon in you! ;)

Kathrin,
Walking a puppy is great exercise, especially twice a day. Most people don't walk for two hours in an entire week!

Jen,
Thanks! Next week I only do five but the week after that it's 12, so the mileage is just gonna keep increasing! So exciting!

Jennifer,
Thank you! I think walking three miles a day is SO great. Even if it's a struggle, you're out there doing it and you're much healthier because of it. Can you imagine how you'd feel if you didn't get that exercise? Probably not as good as you do now!
10:02 AM, September 28, 2008

Sundry said…
This is so great to hear, Liz. Quite a milestone!

Jameil,
YES! You must run a 5K! I guess you have to wait till it gets cold there. But wait, does it ever get cold/cool there?

Moody Gemini,
Thanks! I know I can do it too. I really believe it now.

Miriam,
LOL! I know, I'm still digesting it as well. Sorry I haven't been to visit your blog in a minute. I must remedy that asap.

Florinda said…
Congratulations on making those 10 miles! But that's unrelated to the little award I have for you at my blog.
6:06 AM, September 29, 2008

Dena said…
i'm so proud of you, liz! you truly are in inspiration to me. i know for a fact you will run that marathon kicking its arsssss all the way (doing it gracefully, of course!)
8:41 AM, September 29, 2008

Liz Dwyer said…
Florinda,
Thank you! Ooh, an unrelated award! I will be by to visit!

Dena,
Gosh, that's so nice of you to say! I don't know about gracefulness though. I tripped in a pothole on Saturday. On the other hand, my sense of balance kept me from falling so maybe I do have a l'il bit of gracefulness.

Jameil,
That's not too bad... but does the humidity ever go away?

Pisces,
I'm telling you, even on the days it's been cloudy and cool, there she is with her butt hanging out for everyone to see.

NYC/CR,
Thank you! I think you could probably do it. If you asked me to run 10 miles three months ago, the answer would've been no. But it's been a gradual thing I've worked up to.

Ian,
LOL! I just soak my entire lower body in ice water and that definitely helps to take away any soreness or inflammation. It takes a bit of courage to sit in a cold bath and then dump bags of ice in the water, but it's worth it!
2:07 PM, September 30, 2008