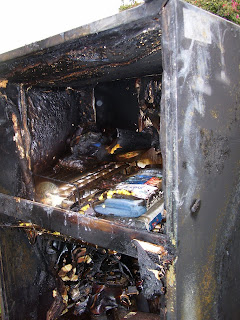 "I was burning some sage and I put it in the trash and then I went back into the living room. I was reading and I started to smell smoke. I guess it wasn't out all the way. I don't know. I'm so sorry."

So said our now homeless neighbor after I asked her how exactly the fire in her apartment started.

To me, it's pretty logical that if you burn sage and put it in the trash while it's still partially lit, your fridge might end up looking like this. Doesn't that seem logical to you as well?

Still, I felt a little sorry for her, watching her standing outside our building in a sweatshirt, sweatpants and a pair of tennis shoes the fire fighters were able to salvage.

I wasn't even home when it all started. I'd done my parental duty and taken my eldest son to roller skating class. I was just pulling out of the roller rink at a little past noon on Saturday afternoon when my husband called me up to tell me that he and my youngest son had been evacuated from our apartment building by the fire department. 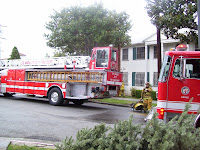 "Pretty bad. There are six fire trucks."
"Which apartment?"
"The one down on the end, three apartments away."

You are probably a little bit afraid of fire. But you probably don't have recurring nightmares about being trapped in a building that's on fire. I do. I'm afraid of fire to a point that borders on paranoia. I've never even been able to even watch that movie Backdraft. So imagine my drive home from the roller rink. Imagine me seeing all the firetrucks as I drove up the street.

I was freaking out. 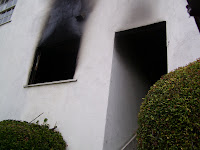 I drove as close as I could, jumped out of the car, dragging my eldest son behind me. I ran up on one of the firefighters, questions pouring out a mile a minute. "What's happening? I live here. Is the fire out?" The firefighter calmed me down and told me that the fire had been contained. Thank God.

I found my husband and my other son, and got to talking to my other neighbors, and then finally to our sage burner.

Fortunately, we were able to go back inside pretty quickly. Still, the firefighters stayed for another couple of hours. Some were out on top of the roof for awhile, axes in hand, just in case the fire had gotten into the walls or spread through the attic that connects us all. They also went into what was left of the kitchen and tore it apart during their investigation. That's how the refrigerator ended up outside. And the stove, the remnants of her dishes and all the charred 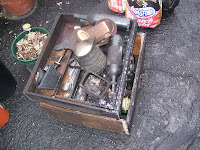 remains of her knick knacks.

Turns out, she lost everything since she didn't have renter's insurance. Like I said, I feel sorry for her, but I know I wouldn't have the same level of empathy if the firefighters hadn't managed to squash the blaze before it spread to other apartments in our building. I'll be real though. If my family lost everything and was now homeless because of some wanna be hippie burning some sage...well, I don't even want to imagine that reality.

I'm just really grateful that the LAFD got here so quickly and handled business in the way they did. Otherwise, my laptop would probably be burned to a crisp and this post wouldn't even exist. Oh, and if you want to burn some sage, please, for your own safety and that of your neighbors, don't put it in the trashcan when it's still lit.
Email Post
Labels: Dumb People Fire Firefighters Los Angeles Neighbors Sage

Anonymous said…
This was a reminder to one and all that we are not promised tomorrow and that we cannot take anything or anyone foregranted.We should put our house in order and be prepared for come what may?
Spiritually are you ready? Emotionally can you cope? Psychologically are you strong enough? Economically are you prepared? Politically are you aware? Socially do you understand?
It was not the incident but the possibilities that was important in this lesson of life and death!!
4:45 AM, January 29, 2007

Odat said…
Oh wow! what a nightmare indeed....Happy to hear you had no damage. I don't know what I would do in the same circumstances...
Hope you didn't have the smell lingering for long either.
Peace
11:16 AM, January 29, 2007

the last noel said…
I'm glad to hear that you and your family is okay. I can't believe he threw the sage away. He should have put it under some running first.
4:09 PM, January 29, 2007

Kate said…
What does it make you think when something you fear so strongly comes so close, but doesn't quite touch you?
4:38 AM, January 30, 2007

Liz Dwyer said…
Hammer,
It makes you wonder, doesn't it?

Anonymous,
I'm in 100% agreement with you. I keep all my important papers in one box, but it's not a fireproof box. What if no one had time to grab the box and it burned up? I don't know though if it's possible to be prepared for everything that comes. I think we can try (like having insurance which my neighbor does not) but I suspect that the emotional, spiritual and psychological arenas are where we are always least prepared.

Dena,
Yeah, me too...although you know it got Elarryo started on a, "This is why we should move back to Evanston," rant. Like fires don't happen in E-town.

Odat,
The fire department puts these gigantic fans up to blow all the smoke away so those definitely help. And then it rained, which seemed to clear the air. But, the folks that lived across the hall from the burned apt., they're staying with friends this week because of allergies.

Noel,
Thanks, I'm still relieved that the fire didn't spread over here. I know folks think sage purifies the atmosphere from evil spirits, but run that mess under some water after you burn it.

princessdominique said…
Wow! And I mean you caught it on film and everything. I normally wet to extinguish.
7:35 AM, January 30, 2007

Anonymous said…
i'm glad that's not your refrigerator! and that you all are safe.

The good thing is no one was hurt and that you are all safe and a bit wizer.

funny though typically one burns sage to ward off the misfortune you fell victim to..

heartinsanfrancisco said…
I'm so glad you and yours are okay, Liz. It's definitely scary to know that your own fate is linked so closely with that of strangers who may not have the least amount of common sense. (In fact, it's increasingly so UNcommon that I wonder why it's called that.)

As ghetto coder mentioned, sage is typically used to ward off bad spirits and purify ones space. A bit ironic in this instance.
11:47 PM, January 31, 2007

velvet said…
I'm glad that you're all okay! How scary, not to mention bone-headed of your neighbor.

I was really scared of fire when I was little. If I woke up in the middle of the night, I would check under my bed to make sure that no fires had started where I couldn't see them. It made sense to me at the time.