If Dr. King Watched TV, Would He Still Dream?

Today's King Day holiday was not particularly jam packed for me. I worked out, played with my kids, took a nice nap, read for awhile and watched a whole lot of TV.

I started off by watching the Today show. I sat through stories on Ford models, nutrition myths and an argument over women choosing to have children outside of marriage, a concept called "choice moms". One guest went on and on about how it wasn't that big of a deal to not have a father in your life. I'll be sure to let all the people I know who grew up in single parent households know that.

Alas, an hour of Today show viewing passed by without me seeing any mention of it being King Day. A little while later, I flipped over to BET, you know, Black Entertainment Television, to see if they had any special programming going on. Nope. The usual stuff, "Rap City" and "The Jamie Foxx Show" were still the main attractions. BET couldn't even do a special on Dr. King's life, the civil rights movement, something? 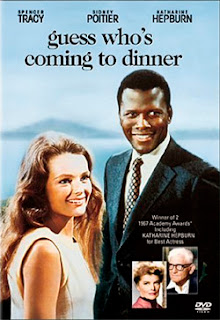 Fortunately, I was saved from TV depression when I checked out Guess Who's Coming to Dinner on Turner Classic Movies. I love the hopeful ending to the film. It always brings a smile to my face...although I wonder what would have happened if Sidney Poitier's character had been less successful. I also wonder, what were the conversations between black women about the film back then? If those convos are anything like what gets said now, I can imagine a couple lovely ladies from my own family saying, "He wants her ditsy 23 year old behind? Oh please, it must be the blond hair. He's treating her like her ass is gold plated."

Also, back then would there have been the commentary that's often heard today about successful black men getting themselves the white trophy wife? I'll have to ask my mom about that next time I talk to her, especially since when the movie came out, she'd already embarked on her own relationship that crossed the color line.

I wonder what Dr. King would think about 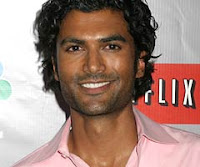 so many black folks winning at tonight's Golden Globes? Would he think his dream is getting put into place since shows with diverse casts such as "Ugly Betty" and "Grey's Anatomy" are winning awards? Those shows winning puts a smile on my face. After all, I remember how when I was growing up, the only time I saw black people on TV was when Soul Train was on. We never saw Asians or Latinos on TV. Just think, twenty years ago, we would all have been denied the pleasure of licking the TV screen when Mohinder, the character on "Heroes" played so skillfully by fellow Chicago native, Sendhil Ramamurthy, comes on.

Then the remote found the show "I Love New York" over on Vh1. New York, in case you did yourself a favor and refrained from watching "Flavor of Love", is the pretend name of the girl that Flavor Flav rejected twice. She now has her own show where she has 20 men trying to see if they can have sex with her, but we're supposed to believe they're competing for her affection. If you haven't seen this show, believe me, it's a train wreck. Dr. King is turning over in his grave and shouting, "This was not the dream I envisioned!"

Speaking of dreams, sometimes I get a little annoyed on MLK Day because all anyone wants to talk about is that quote, "I have a dream". I'll bet most folks haven't listened to that speech in it's entirety ever. I have to give a special shout out to LAist for putting the speech up on their site and giving me the first real feeling all day that it was actually the birthday of Dr. Martin Luther King.

If you'd like to, check it out, thanks to YouTube. What a better world this would be if we knew about this speech (and lots of other stuff) through our own knowledge, not just through what other people say about it. I haven't watched the speech for a couple of years and it was incredibly inspiring to watch the whole thing over again. I wish I'd come across this speech on TV today.

* said…
MLK Day is still big in Chicago (thank you very much). Just thought I'd let you know that Jesse, Barrack, Mayor Daley, et. al had a big dinner to celebrate and we got to watch it on the local news...

Barb said…
You know.. I had never read the whole speech before either, until I set about making my MLK Day post. Yes, I only posted the best known part, but I found the whole text very moving.

What surprised me was how few comments I got on it. I got lots of comments on the posts I did about Gerry Ford.

Liz Dwyer said…
Jali,
Oh I'll bet there was great local coverage in ATL! That's why my husband constantly wants to move there.

Peggy,
Barack, Daley and Jesse...now that is a powerhouse of folks. You and Jali are making me wonder if the problem is that I live in LA, not in Chicago or Atlanta.

Skittles,
That's really interesting that you didn't get alot of comments on the speech. That's fascinating. You get a ton of visitors so I wonder what they'd say if you asked folks why they didn't comment on it.
7:35 PM, January 16, 2007

Liz Dwyer said…
Odat,
You're right, this probably isn't the dream anyone would have foreseen being a reality.
9:35 PM, January 17, 2007