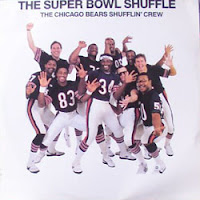 This afternoon, I was, as we used to say back in the day, "cold chillin'" on the couch. I was also enjoying the leftovers of Friday night's vegetable lasagna, drinking some imported French pink lemonade, and doing what every decent Chicagoland and Northwest Indiana resident (or former resident) was doing: Watching the Bears game.

As you probably already know, the Bears are going to the Super Bowl for the first time in 21 years. Last time they went to the Super Bowl, Bears mania hit Chicagoland. We even had a 45 single of the "Superbowl Shuffle" record.

In case you weren't born or you were living under a rock in 1985, the "Superbowl Shuffle" was a

rap song performed by the Bears football team. We loved hearing the record and would put it on and dance to it while rapping along with the players. I actually thought William "The Fridge" Perry's rap of "You're lookin' at the Fridge, I'm the rookie. I may be large, but I'm no dumb cookie" was, like, totally awesome dude. (Hey, it was 1985!)

I was happily reliving these "Superbowl Shuffle" moments in the beginning of the third quarter of today's game when, ahem...cough...I heard the pitiful voice of my five year-old son, Olinga, asking, for the third time this weekend, "Mommy, will you take me rollerskating? You promised."

Oh great. I'd forgotten about that. I made this promise on Friday night. He wanted to go on Saturday but I had to work. So, he asked me, "Will you take me on Sunday then?"

I know I was half listening when he asked, but I did say, "Sure baby. We'll go on Sunday." I didn't take it too seriously because the way kids are, tomorrow can come and they're content to play with their action figures in the room. Plus, I didn't know know where this roller skating thing was coming from because he's never asked to go before. A friend of his had a birthday party at a roller rink a couple of years ago and he hated even having th 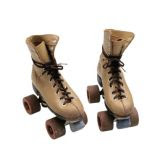 e skates on his feet. He just wanted to play the video games in the corner, which I'd said no to, and he went home with his lower lip stuck out, pouting.

Today I asked him why he wanted to go skating and he replied, "Because it'll be fun." He paused for a moment and then added, "You'll hold my hand so I don't fall, right?" Right. Sure. The truth is that it's probably been a good 21 years since I've been rollerskating, and I barely knew how to get around the roller rink back then. It's because I have this crazy phobia that I'm going to fall and knock my teeth out. I don't know why I have this phobia, but I do. So, roller skating and ice skating are generally out for me.

What a dilemma. Keep a promise to my son and spend the afternoon landing on my behind in a roller rink or finish watching the game? Tell him we'll have to wait till next week to skate or miss seeing the Bears win or lose? Go skating and potentially lose a tooth. Sigh.

Skating won. Of course it did. It killed me in the moment to actually turn the game off, but I rationalized to myself that in the grand scheme of things, the Bears are a sports team with players that make millions and an ownership that makes even more. They'd survive if I didn't watch the game...but my son, he'd remember that I'd promised and then he'd remember that I backed out on that promise.

Yes, we landed on the floor a whole lot but I think it boosted Olinga's confidence to see that he could skate better than I could. He kept saying over and over, "See, none of your teeth are going to fall out. I'm going to protect you! Just hold my hand!"

One of the rink referees helpfully pointed out to me that there are classes on Saturday mornings for kids to learn. He then added, "We also have a Tuesday night adult class if you'd like a refresher to improve your own skating skills. Lots of adults re-learn when their kids do." Hmm. Maybe if I actually take a class I won't be afraid of falling and knocking out a tooth.

When I got home, I looked online and saw that the Bears had indeed won the game. I'm as happy as can be that Chicago is once again Super Bowl bound. But nothing beat having Olinga kiss me on the cheek and whisper how happy he was to go skating.
Email Post
Labels: Chicago Chicago Bears Dillemas Phobias Roller Skating

none said…
The 1985 superbowl was the last one I watched. I loved watching the fridge plow through a dozen guys like they were matchsticks.

meera bowman-johnson said…
That's funny, my 5 year old keeps asking to go ice skating. I loved ice skating as a kid, but cringe at the thought of this 34 year old body out there (sliding) across the ice. But I'm sure we'll end up there at least once before winter is over.

See...that's the difference between mommies and daddies...I wish I would ask Mr. J to take J-Jo skating (or anywhere!) while the Sixers are on.

Liz Dwyer said…
Hammer,
Oh I'm so disappointed to hear that the Fridge reps the NRA now. That's lame because he was the man back then.

Mrs. J,
Yes, my behind is a bit sore today from biting the dust. My son didn't seem to be hurt at all. In fact, he thought falling was fun. I'm just glad I didn't break a bone. I'm trying to be a good mommy, but I have my limits. We sure won't be hitting up the roller rinks on Super Bowl Sunday! ;)

Peggy,
The more I think about it, the more convinced I am that in a few years, my little boy won't want to go anywhere when the Bears are playing and he sure won't want to hold mommy's hand so I have to take advantage of it all while I can. And yes, go Bears, get busy! Go Bears, get busy!
3:17 PM, January 22, 2007

The Moon Topples said…
I'm still waiting for their second album to come out.

Obviously, though, you made the right choice.

So does my ambivalence about the Bears victory make me less "decent" or less of a Chicagoan?

Polyman3 said…
I go ice skating with my 12 yr old daughter and have a pisser because we both suck at it.

Your car has been tagged by the Latin Kings. That right there gives you a full Chi-town pedigree. ;)

Polyman,
See, our likes and dislikes can't be categorized according to gender. But, does this mean you click on the Lifetime movies the minute she walks out of the room?
7:08 PM, January 23, 2007

The Counselor said…
That was beautiful!

I think I'm going to get pregnant tonight so I can reap some of the joys of parenting!!

Okay...maybe not...but you surely had me considering it! :)
I'm a fellow Chicagoan and I'm quite excited about it all!! The Dragon is from Jersey, but has been a Bears fan all his life...weird huh?

I'm glad you spent that time with your son. Most parents don't understand how important some things are to their children--and PROMISES are at the top of the list!

Andromeda Jazmon said…
That is really sweet. I have the ice skates and roller blades I bought when my oldest was about 10 and he went through a skating phase. I used to be big on skating as a girl. I'll have to take these younger boys out in a few years. You are right; nothing beats it!
12:10 PM, July 15, 2007