Does The Scale Lie?

I don't know anyone that likes to weigh themselves during the holidays. Not a single person. 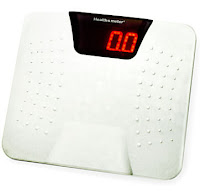 After all, who in their right mind wants to see a numerical value put on everything they ate at every single holiday party, Christmas Eve party, Christmas dinner or New Year's revelry? Who wants to see the result of Rose Bowl party snacks and the lavish consumption of a two pound box of Sees chocolates?

Then comes the end of the holidays and everyone's shocked when they finally step on the scale and see the numerical value that represents their tight-fitting pants. Alas, that's the way of our world.

This year, I sadistically decided I wasn't going to gain a single pound 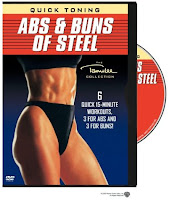 over the holidays. Yes, I ate cake at my birthday party but I turned it down at my friend Richie's birthday a few days later. Tamilee Webb, the Queen of Abs and Buns of Steel, became my new best friend. I endured the gross people at the gym. I braved the ridiculously windy weather we've had in LA and got hit in the head by a flying tree branch while running the track at the park by my house.

Yes, I have sacrificed myself unfailingly on the alter of physical fitness and healthy eating. Everything was going swimmingly...until yesterday, the official end of my vacation. I stepped on the scale and I weighed SEVEN pounds more than I did on Saturday. I stepped off the scale and then back on. Same result. I picked up the scale and jiggled it a bit. Same result.

Seven pounds? Is that even humanly possible? I've heard of fad diets that promise to help you lose seven pounds in two days, but gain it? Oh hell no! There's no way I weigh seven pounds more than I did on Saturday. I swear, I have not being trying out for the sequel to Super Size Me.

If you are a woman raised in the United States, you know that this seven pounds in two days thing could incite a major freak out on your part, especially if you're not suffering from PMS. If you are a woman that happens to live in Los Angeles, you know this change in the scale could bring on a nervous breakdown. I try to be rational and level headed about these things though, so I called my husband in.

"Have you weighed yourself lately?" I ask.

"How much do you weigh?" 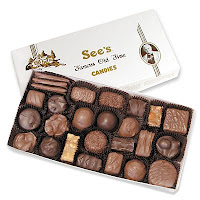 "Umm..." I know he's stalling on his answer because he's the one that ate the majority of the two pound box of Sees chocolate instead of worshiping at the throne of Buns and Abs of Steel.

"Well, how much?" I'm starting to get annoyed. In fact, I feel a little bitchy. Well, very bitchy.

"I'm not telling you!" he said. He was clearly getting annoyed too.

He turned and walked out of the bathroom, "Yeah, it's probably broken, so you don't need me to tell you that."

I finally resorted to dragging a couple of the dumbbells I work out with out from under the couch. Would two 10 pound dumbbells weigh 20 pounds or 27 pounds?

Find out next time on tomorrow's episode of "Los Angelista's Guide to the Pursuit of Happiness".

Just kidding. I'll tell you: They weighed in at 26.5. The scale is officially broken, most likely the victim of my children's antics. I was quite relieved. I sure don't want to have to work off seven pounds.

I told my husband and of course he replied, "I told you. It's probably been broken for a couple of weeks. I thought it was pretty off last time I weighed myself."

Mmm hmm. I could have pointed out to him that it was just fine on Saturday, but I don't want to burst his bubble.
Email Post
Labels: Family Scales Weight

The Moon Topples said…
I should think it'd be nearly impossible to gain that much weight in sich a short amount of time. Of course your scale is broken (thought you might like the gut reaction of someone who hasn't recently been dismayed by weighing themselves on it).

The Counselor said…
I was on the edge of my seat...LOL...
do I have to put the popcorn up??

Much like everyone else, I'm horrified at how I "got down" for the holidays! I think my scale is broke too...
(we haven't figured out a way for the dragon to weigh himself w/o his head attached)...

heartinsanfrancisco said…
I love this post! Gaining 7 pounds overnight would be like a death sentence in L.A., wouldn't it?

I think the only way you could do that would be if you were in a competitive eating event. Sorry, Liz, but one lousy piece of cake does not qualify.

Liz Dwyer said…
MT,
Logic goes out the window for me sometimes. I will ship the scale to you so you can experience it for yourself.

Counselor,
You are free to consume butter and salt-free air-popped popcorn.

Kate,
It was either the weights or one of my kids, but they were still sleeping and I felt bad about dragging them out of bed just to step on the scale.

HISF,
Death sentence indeed! Folks in Hollywood would bemoan the fact that they wear a size 2 instead of a zero. We'd see a rash of "baby bump" sightings on the pages of US Weekly.
6:47 AM, January 10, 2007

velvet said…
Whew! That kind of sudden weight gain would be a reason to go see a doctor. We had a scale go bad on us, but it read about 5 lbs. lighter... it was too good to be true, sadly enough.

Brilliant solution about the weights, btw.

hehehehehehehehehe My word you are so talented! I wish I was as witty as you! I have totally gotten into with the scale before. I don't even own one in my home. I go over my Mommy's house to use a scale. Last time I gained six pounds, AND the scale wasn't broken! hehehehehehehe Have a great rest of week:)
7:32 PM, January 10, 2007

Liz Dwyer said…
Velvet,
If my scale had gone lighter, I'd be going around erroneously thinking I was da bomb! My husband would be thinking he could eat a 2 pound box of chocolates and still lose weight.

Mahndisa,
Smart woman to not own a scale! You are a genius.