For Rent: Roof For Your Rock Video 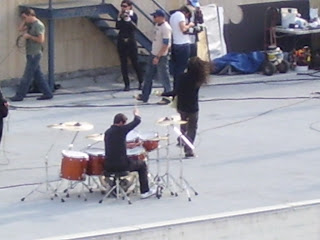 There's a certain rooftop in downtown LA that seems to constantly be rented out by wannabe rock stars filming their music videos. It's right across the street from my office.

This would be great if we got some great bands filming over there, someone like The Killers, Jet, or Depeche Mode. Someone like the Raconteurs or AFI. I'd be glued to the window with binoculars to watch that! Except, the reality is that none of those bands would go for this "rock on a roof in downtown LA" concept. It's already been done very well... by a little Irish band called U2.

Remember "Where The Streets Have No Name"? Of course you do! Remember how U2 rocked skid row so hard the cops had to come? Yeah, that was a truly innovative concept back then. Nowadays, I think the building realtor must tell these hopeful stars that it's the same roof where my Irish brothers caused such brilliant chaos. They must sell the promise of U2 karma.

I can just hear the director and production people renting the space and then telling the musicians, "Filming a video on a roof down here worked for U2. Don't worry if that concept's already been done. It's gonna work for you all too. You guys are going to be bigger than Bono one day."

The rockers come ready in their black clothes and their tattoos. They either have short spiky hair or the long shaggy mane. They also seem to be able to fling their limbs about in ways I didn't think were humanly possible.

They may have dropped that name but, come on! Once you've had a name like that, you can't just change it to Finger Eleven and expect folks like me to not still laugh at the old name. Imagine Finger Eleven performing at the MTV Video Music Awards. "Straight from Ontario, it's the Rainbow Butt Monkeys. I mean, Finger Eleven!"

How do I know they're even called Finger-Eleven, let alone their former colorful primate body-part name? Oh, because they had to do about 100 takes of their video. Every time they did a take, the song got blasted all through my section of downtown. It was so loud! We heard it so much that one of my colleagues actually jotted down some of the lyrics. We googled them and found out the song is titled "Paralyzer"...because it's so bad, it's going to paralyze everyone's eardrums! Imagine hearing this for a good six hours while you're at work:
"I'm not paralyzed but I seem to be struck by you
I want to make you move
because you're standing still
if your body matches what your eyes can do
you'll probably move right through me on my way to you"
Okaay then... None of us could figure out what that's all supposed to mean but based on what we 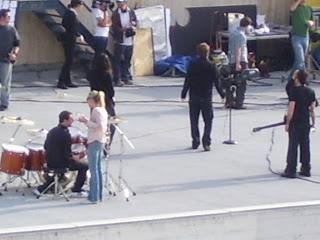 heard, one of my colleagues came up with a better video treatment for them. They should have been McDonald's fries getting ready to be eaten by some hot girl. They could try to escape but, no, the girl's a paralyzer and she's going to drown them in ketchup and eat them!

Can I tell you how grateful we were when they took breaks to get their makeup touched up by the nice makeup artist in the pink sweater?
Unfortunately, Rainbow Butt Monkeys, I mean Finger Eleven, it's not the U2 roof. That roof, and that video concept, is actually a couple of blocks down and is reserved for bands that can really play.

Thanks for the entertainment, but please, don't come back tomorrow.
Email Post
Labels: Los Angeles Rock and Roll Videos

velvet said…
Oh, Liz, you have my sympathy. That sounds excruciating. I definitely like your co-worker's video treatment better... at least it's original!

The Moon Topples said…
I feel compelled to point out that the rooftop thing was not started by U2. They were ripping off, or paying homage, to the Beatles, who played atop their Saville Row office building in London at the end of the sessions for Let It Be.

Polyman3 said…
So that's what the Rainbow Butt Monkeys are up to?
Only kidding.
Tell you the truth the Beatles did it first on Abby Road.
But U2 was great too.
6:24 PM, January 11, 2007

Liz Dwyer said…
Velvet,
If only the Rainbow Butt Monkeys had known to hire us as their director, stylists and production team!

MT,
That's right, the Apple Music rooftop...you know, I've never seen that performance. So, the Beatles are the first. But, I was thinking specifically of LA rooftops with the police coming and being The Man, shutting stuff down and ruining all the fun. And of course you put a smile on my face when you say it's funny. It means alot.

Noel,
EXACTLY! I think your office isn't too far from me. I'm glad the sound didn't carry and you were spared!

Polyman,
Since I'm half Irish, I surely have a genetic bias prefer anything that Saint Bono and his minions decide to do. But, clearly I need to search around YouTube for this performance by the Beatles. I wonder what they would have been like on a roof in downtown LA instead of in London.
7:49 AM, January 12, 2007