Your Must Read Randomness With Los Angelista 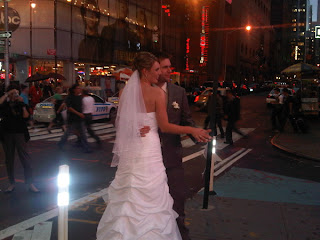 How is it Wednesday already? Sigh, I'm waiting for my clone to show up and wash all the dishes in the sink from yesterday. In the meantime, here's what's happening in Los Angelista-stan:

1) That NYC Tornado: I'm still tripping over the fact that I was in NYC and there was a tornado! I got on the train uptown in Harlem, got off in Times Square and within a minute, the heavens opened and the torrential downpour and crazy thunder and lightning commenced. I still wonder what happened to the bride and groom taking photos. Her poor dress.

2) Serendipity: Not only is that one of my favorite words (heffa is probably the other one) but I totally experienced serendipity after the tornado storm decided to bounce up outta NYC. After it stopped raining, I decided to walk up Broadway from 44th to 83rd because I felt like treating myself to a lil Cafe Lalo. I needed a good dinner & dessert since the previous evening's repast was a bag of Pop Chips & a chai, so Lalo it was.

Anyway, while walking, I rang up my dear friend Leili (go check-check-check out her amazing art & writing) and since I love talking to her, I sat on the bench outside Lalo for quite some time on the phone. Next thing I know, I hear someone calling my name -and I look up and it's a lovely friend from LA, Tritia, that I'd totally lost touch with! Turns out she JUST moved to NYC right around the corner from Lalo and... if the tornado hadn't hit, I would've ventured out earlier and missed her. If Leili had been unavailable, I wouldn't have sat outside chatting, and I would've missed her. So you see, it was meant to be - and she and her charming husband came and ate with me at Lalo!

3) Wash Hands Before Leaving The Restroom: Unless you're totally balling, your apartment in NYC is gonna be small... and your bathroom is going to be teeny-tiny. Just how tiny, you ask? Here's Tritia demonstrating some NYC efficiency! You can wash your hands WHILE you're on the toilet! 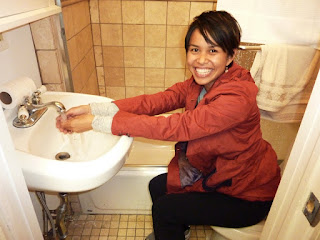 4) 4:45 AM wake-up call: My mornings begin at that unholy hour six days a week. I won't get into the why of it, but let's just say that getting up that early blows... especially since I'm a night owl and my brain runs a mile a minute at night.

5) Mommy, what's that smell? Is that a skunk?: The idiots in front of us in the drive through last night were smoking so much gangika that clouds of smoke were pouring outta their car when they rolled down the window to get their food. You KNOW I called LAPD and gave them the license plate. Maybe they had the munchies but I am not the one to put up with driving and drugging. You hear that Clifford Harris?

6) 1969's Gym Buddies Moved To LA: Despite my extinction level alert fatigue status, I took my bad self to the gym at 7:30 last night to get a workout in. Killed 3.3 miles in 34 minutes and then decided to go do some weight machines. Why do I get the old sinewy men with missing teefers talking to me? "I used to be a boxer back in the day, gurl. You see these here muscles? Yeah, I was a killa back in the day! You like them muscles don't you, gurl?"

7) I Told A Lie: Is it wrong if I pretended I didn't speak English all that well and told Mr. I Lost Four Teefers In A Boxing Match that I'm an immigrant from Angola? When he asked where Angola is, I said, "Africa. We have big problems with the HIV. You know it, yes?"

8) Rocky Start To The School Year: My youngest has had a VERY rocky start to the school year at his new school - primarily because another kid in the after school program decided to punch him in the stomach on the very first day, and then last Friday, this kid choked Mr. T moments before I arrived from LAX to pick him up.

I didn't send him to the after school program on Monday. Instead, I picked him up and brought him back to work with me, where he did this, because, as I told the teacher, I don't send my child there to be assaulted and if there's no guarantee this won't happen again, he won't be attending...and police involvement or legal action would be taken. Thankfully, the kid who hit and choked mine was moved to a different group. I don't get why he can't just be booted from the program, period, but at least my kid's feeling protected now and yesterday, he was MUCH happier.

9) Expectations Are Everything: If you're in LA on Thursday night, you need to come to this education event series at my j-o-b. There's some great panelists along with LAUSD School Board member Steve Zimmer. I recently interviewed him and he gave me one of the most honest answers I've ever heard from someone in elected office about the achievement gap.

Of course, plenty of people disagree and they don't think the achievement gap is intentional. I, on the other hand, agree with Steve - but I want to know how we fix that "intentionality"so maybe our panel will tell us on Thursday night.

Tafari said…
Isn't it great when the stars align in the most unsuspecting ways? it is so cool that you got back in touch with your friend & had a chance to enjoy a meal

Some little boy hit my sweet Amelia on the booty the other day. I told her that if it happened again that she needs to slap the shit out of him then tell the teacher why she did it.

dolphyngyrl said…
#9: I think it's intentional and, sadly, self-perpetuating. I'm not in the area, but I'd love to hear any good tips that you can share after the event!
1:54 PM, September 22, 2010

Liz Dwyer said…
Tafari,
It is cool! If one little thing had been different, we would've missed each other.

What is wrong with kids these days with all the hitting, choking and booty slapping? Oh, wait, nevermind... there are tons of videos on youtube of adults fighting. sigh.

1969 said…
LMAO! What a coincidence...I saw my gym buddies this morning too. I had to get coffee at D2 because the starbucks line was too long.

So glad your son's bullies got moved. They should have been kicked out for putting hands on another student. Unacceptable. Let me know if you need me to fly to LA and do a drive by. :)
11:47 AM, September 23, 2010

MommyNaniBooboo said…
Falling asleep on the desk & ring prints on my face... So with you there.
I can't believe what happened to your son. I'm pre-emptively nervous about sending mine to school because of such situations (he's two).
11:59 PM, September 23, 2010

Anonymous said…
Delurking, here. I love your blog and agree wholeheartedly with the quote about the intentional achievement gap. I know you must have been tired indeed when posting because I know you have an excellent command of grammar, but would you consider chaging the "their" to "there" in the quote? This is not meant to be rude or pedantic. If it comes across that way, I apologize. I would appreciate it if you did not publish this comment.

Liz Dwyer said…
1969,
I'm glad that bully got moved too! Whew... but he told me some mess today about some kids that were teasing him and trying to get him to cry. I don't know what is going on, but I had a good talk with the principal today after school. She seems totally dope and was VERY concerned to hear what's been going on.

Val,
You know, you're totally right! It sure is!

MommyNaniBooboo,
LOL, I love love LOVE your name. So awesome. As far as desk sleeping... do you get the drool on the wood too? Sigh, we all need more sleep!

You are right to be nervous. With the way education is these days...you have to be totally vigilant about your child.

Michelle,
No...I'm not going to change it! It is what it is!

Just kidding. Sometimes I type too quickly and my editor doesn't catch everything. My interview with Zimmer has been on a couple major sites so go figure. Maybe no one else noticed or cared to point it out. ;)
8:18 PM, September 24, 2010

nick said…
I love that you pretended to be an immigrant from Angola! Serves the daft git right. Good for you sorting out the problem with Mr T and not shrugging it off. Every schoolkid deserves respect, since any kind of bullying can drastically affect school achievement.
7:48 AM, September 26, 2010

kegf said…
entirely off topic, but I read this article today about high school education in Massachusetts and how one huge, mostly minority school has turned around it's graduation rate and general success rate and thought that it'd make you smile.
http://www.nytimes.com/2010/09/28/education/28school.html
9:27 AM, September 28, 2010

Liz Dwyer said…
Rose's Daughter,
LOL, that's NYC apartments for you! The program did contact the parents but I'm not sure what the outcomes of that were.

Nick,
I definitely take the bullying seriously. I can't even imagine NOT doing so - and it's sad when people don't and just act like it's normal behavior that's a rite of passage in schools.

Kris,
I read that story yesterday and it's SO inspiring - and getting noticed because it's success without there being a "small school" component. That's STILL a lot of kids there though! ;)
11:14 AM, September 29, 2010