How Much Would You Spend To Save Your Dog? 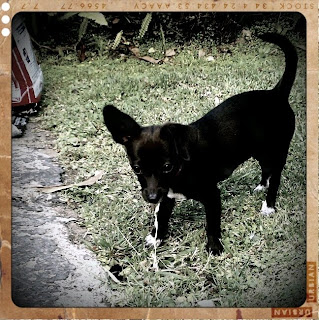 If dogs could have singles ads, my puppy's ad would probably say...
"Hi, I'm Andromeda. I'm 5 months old and I weigh 4.2 lbs. I love snuggling, attacking stuffed animals and chasing my tail. I'm insanely cute and naughty but I'm good at acting innocent... even when I'm chewing on my mommy's shoes!"
She'd probably also have a line or two about looking for a guy that can afford pink doggie sweaters, a skull and crossbones leash and a blinged out collar.
My sons, nine year-old Mr. O and six year-old Mr. T want to spoil Andromeda non-stop. I've actually had to explain to them how $37 for a doggie sweater is not a reasonable price. --I'll admit, it was a totally cute sweater and she would've looked SO fly in it... but then I came back to earth and remembered that Andromeda's a dog, not a person. Sometimes I don't want to spend $37 on a sweater for myself so heck to the no on dropping that kind of cash on 4.2 lbs of fur.
Yeah, my boys love her so much, sometimes I think they forget that she's not human. Last night I overheard, Mr. T say, "Since mom doesn't want to get pregnant again and give us a baby sister, Andromeda will have to be our baby sister."
Uh huh, yeah. Go on ahead and run with that idea, son.
But just like baby sisters, keeping little Andromeda healthy ain't exactly cheap. The shots, the worm medicines, flea treatments, and this month we have to pay to get her fixed... yep, she's almost as expensive as a real baby sister.
But if a real baby sister broke her leg and it was going to cost $4,000 for surgery, I'd spend the money to get it fixed. Would I do the same for Andromeda? Lately I've been asking myself how much I'd spend to save her/get her healthy. I don't yet have answer.
I love her and I'd feel awful if she got seriously hurt or had some sort of illness, but I hear stories of people paying out thousands to vets and I feel very torn over the idea of spending that much money on my pet. I'm not sure where to draw the line on paying to get her healthy vs having her put down.
I know, I can't believe I'm even thinking about this, but I'm SUCH a planner and a "what if" thinker. I like to have all my bases covered before disaster strikes. I'm investigating pet insurance, but there are so many plans, I don't know which one to choose.
I've also been thinking about how folks will trick their dog out and spend tons of money on health care costs for it, and then step right over a homeless person - an actual human being. That bugs me, and I don't want to go down that road.
I'll also be the first to admit that I've never understood the dumb people in scary movies like the Amityville Horror who run back in the house to save their dog - all while the demon possessed killer is after them. I'm still on the Forget The Dog, Save The People tip. I'm sure some people think this makes me a bad person but I figure it's all about common sense and moderation.
My whole family is enjoying her cuteness and loving taking care of her, but Andromeda is totally my little baby. Nobody else in this house got up in the middle of the night with her to take her out when she was seven weeks old, so she is my baby.
Anyway, while I mull over the big picture dog healthcare questions, you are more than welcome to donate a blinged out sweater, collar or leash to her I'm One Of Those Fly Los Angeles Dogs You Love To Hate efforts because clearly, I have a daughter to dress!
Email Post
Labels: Andromeda the Puppy babies healthcare insurance kids Los Angeles Money Pets

EmmieJ said…
I think about this a lot too. We have a 9 1/2 year old and a 2 year old dog. Going back to my algebra days, here's what I think my equation might look like:

In other words, it'd be hard decision but S, A, R, C and X are the main factors I'd consider. And as a fellow planner I *totally* understand the frustration with planning for the unexpected...especially when it comes to something like a pet's life.

EmmieJ said…
And then I messed up my equation. R = R = likelihood of recovery from intervention, where 1 = very likely and 5 = not likely

Casey said…
So funny because Hippo is my girl! I am in a house full of boys as well, and she is my middle child. My best friend is a vet and so thankfully she has made some house calls when Hippo was sick so I wouldn't have to pay for a trip to the E.R., but I took her to Oklahoma to get fixed because it was that much cheaper!!! She comes with us everywhere but surprisingly we haven't bought her a carseat...
11:43 AM, September 01, 2010

nick said…
Yes, I'd say there should be strict limits on saving a dog, however cute and adorable. After all, dogs ain't humans and the medical expenses can really mount up! Having to put a dog down must be horrible but how long do you keep a (probably deteriorating) life going whatever the cost?

Tiny's Mom said…
As a vet nurse in a busy ER I will add my 2 cents ;)
When it comes to my own dogs, I will do a lot...but not everything. I won't put my dogs through chemo or serious surgery..unless it is something fixable that won't affect their quality of life. If my 3 year old dog was hit by a car and needed surgery I would do it. When my 11 yr old dog broke his leg due to bone cancer...we chose to say good-bye.
10:36 AM, September 02, 2010

Mick said…
I remember when my Aussie Shepherd was on her last legs, so to speak. It was so vivid. There was the incessant yelping and constant fidgeting - something very abnormal. I took her to the vet and they said she needed to be operated on, but it was unlikely she was going to make it. She was an old dog and my girlfriend and I at the time could not afford to pay for the expenses.

I was heartbroken for months on the decision I made. It was such a hard decision, but I felt it was the best at the time.

Nature is cruel for giving dogs such a short life span. You give them your love and everything and they give you that and so much more back. Sometimes I think the love you receive from them is worth the heartbreak.
9:56 AM, September 03, 2010

Lola Gets said…
Ive owned cats for 12 years now, and Ive spent a lot of money on them. Im quite sure that Ive spent over $5k on Ivan alone (hes a sickly thing), and when my deceased Ariel was sick, I spent about $2k on her too. When I adopted these animals, I took on the responsibility for their well being, so I gotta do my part.

But, your dog is so young (and doesnt have any pre-existing conditions), have you thought about getting health insurance for her?

Jen said…
I am in the school of "if you choose to take in an animal, you have to provide care for it". Having said that, here's where I try to be rational about it:

a. find a vet you trust and who's not going to suggest measures that fill his/her pockets but may not be truly good for the animal.

c. what is the quality of life going to be for the animal after said intervention?

d. age of the animal.

Heck, I'm also of the school that we apply too many extraordinary methods to our humans. If I were elderly and sick and wouldn't have good quality of life after whatever extreme intervention, I believe that I'd rather drift off to sleep than go through horrid procedures to extend life for a few months.

Liz Dwyer said…
Everybody,
THANK YOU for such thoughtful responses - everything from equations (loved it) to actual amounts you've spent on your pets. Andromeda is totally healthy but I am a natural worrier, and I like to be prepared, so I'm not surprised I'm already thinking about this... although I probably need to worry about puppy school more than anything! ;)
11:33 PM, September 04, 2010

Kim Moldofsky said…
I'm so interested in this conversation because one of the stumbling blocks I face when we talk about getting a dog is the health care costs an animal might bring. I understand that a pet is a member of the family, but I think some people do lose sight of the fact that they are not human. EmmieJ's (revised) formula seems like a good guideline. Still, it's all hypothetical until you're faced with a decision. Good luck!
12:49 AM, September 14, 2010