All Hail The Afro Puppy 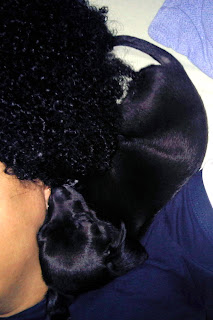 Clearly, I need to start an "Afros Are Useful Because..." list and add "Can Be a Sleep-Nest For 12-week old Puppies" as the first entry.
Yes, folks, cute little Andromeda the Puppy somehow found her way to my bed and managed to create a little nest in the crook of my neck and in my hair.
As you can see, not only did she nest in my hair, she also stuck her nose in my ear... which meant that I woke up because I heard a snuffling, snoring kind of sound.
Once I realized what was going on, I was simultaneously grossed out and touched. Grossed out because EWW, there's a dog all up by my face and in my hair... but AWW, she is awfully cute and she clearly loves me!
Since I sleep with my BlackBerry, I reached under my pillow, got it out, and snapped a photo of the snoring afro-nesting princess, Andromeda.
Alas, this tale doesn't end with me drifting back to sleep leaving Andromeda in place. Nope, I put her right where she belonged - her crate.
I'm such a mean mommy, aren't I?
Email Post
Labels: Andromeda the Puppy dog training Hair sleep

Liz Dwyer said…
Adei,
Yep, she's SO cute! She has us semi-wrapped around her paw. My next mission is to get footage of her chasing her tail. It's hilarious when she bites it too hard.

Liz Dwyer said…
Jameil,
She cries like crazy in the crate so my husband lets her out. I think he put her in the bed too, although he won't admit it!

Liz Dwyer said…
Justine,
The boys are over the moon over her. They frequently gush over how they are the luckiest boys on the planet because they have her!
2:44 PM, July 07, 2010

Liz Dwyer said…
Remnants,
I'm going to try to make a tail-chasing movie this weekend. It's not hard to get her to do it and it's hilarious.