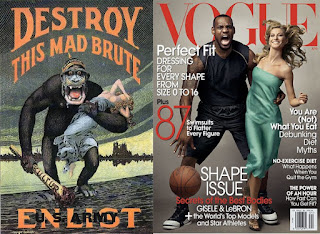 It's Saturday! What do you have going on? Here's a few things I'm thinking as I prepare to head out into the world.
1) LeBron James Needs More People: Or better people. Or media training. Or some common sense. It didn't take a rocket scientist to know he was gonna come off like a foolish, immature narcissist. After all, this IS the same person who agreed to pose like King Kong with Gisele Bundchen on the cover of Vogue. He can play ball but clearly...yep. He needs more people.
2) The Cav's Owner LOVES The Color Purple: Who knew Dan Gilbert was so down with Alice Walker's The Color Purple. For real, Gilbert got all Celie on LeBron...
Learn how to say, "It's been a pleasure. We wish him the best. There will be no further comment." But speaking of sports...
2) Cubs vs Dodgers: Thursday night, me and my crew (yes, I said "me") took a trip to Dodgers Stadium to see the old hometown team open up a can of whupazz on the new hometown team. Or at least, that was the PLAN! Dodgers won, 3-2... and they won AGAIN last night, 9-7.
3) You Better Eat EVERY Crumb Of That Churro: To add insult to injury, my sons cheered wholeheartedly for Los Doyers while consuming $4 churros. I mean, for real? The heck is that about? Doesn't Dodgers Stadium know it's a recession?
4) Raccoon Homies: Upon arriving home from the game my kids observed a ginormous raccoon scurrying through our yard. My youngest yelled out, "Run before it calls its homies!" I guess he thought a posse of raccoons were gonna roll up and ask, "What's your set, foo?"
5) You Bosses Need To Hire Black Folks: I don't care if you already have your one or two token black people around to make you feel like your office is super diverse, there's some more that need jobs. Unemployment for black folks ages 16 and higher is 15.4% - almost twice that of whites who clock in at 8.6%. It's even worse for black teens between 16-19 years of age. 39.9% have no j.o.b.
6) Signs You Have Too Much Time On Your Hands & You're MASSIVELY Talented: You make a toothpick rendition of San Francisco. Hat tip to my brilliant sister, Leili Towfigh for this one!

7) True Avant Garde: I'm tired of folks trying to act like Lady Gaga's the epitome of avant garde style and music. People, get out more and check out Cities In Dust from Siouxsie and the Banshees.
When Lady Gaga makes a song about the people of Pompeii dying in the Vesuvius eruption, THEN I'll give her some credit for being something else other than a pop star who wears her underwear in public and can sing a little bit better than these other autotuned clowns out here.
8) Banned From Whole Paycheck: Apparently this mom in Chicago is hot because she got banned from Whole Foods for life for "accidentally" putting some vitamins in her purse because she's such a frazzled mommy that her kids were driving her insane and she forgot she hadn't paid for them. Uh huh, heffa. And then she protested and they've reinstated her shopping rights. She should be grateful the police weren't called, she wasn't arrested, and she wasn't followed in the store in the first place. I want to slap a big sign that says WHITE PRIVILEGE, CLASS PRIVILEGE on her forehead.
9) Enjoy your Saturday: I'm going to Hurricane Harbor Water Park with my kids and a friend's daughter today. Hubby's staying home with the d-o-g. What's your guess, will the house be clean when I get home?
Email Post
Labels: baseball basketball Black people Chicago Chicago Cubs Cleveland Lady Gaga LeBron James Miami Siouxsie and the Banshees sports unemployment White Privilege Whole Foods

Unknown said…
You should post a wrap-up like this every week. Glad you started reminded folks that Lebron's ignant self posed like King Kong on the mag. He needs more than media training. He needs the Paul Robeson school of refinement.

Let a Black woman leave the vitamins in the cart, she'll be arrested. This woman smuggled some Vitamins and then was let back in the store. #icant
11:59 AM, July 10, 2010

Liz Dwyer said…
Vizionhenry,
LeBron would need to be in school with Robeson for a loong, loong time. He'd need a complete re-education.

That's exactly what I thought about that vitamin complainer, too! And she has the audacity to go to the MEDIA and complain!

Glad you like the wrap-up. I'm definitely thinking about making it a Friday or Saturday regular thing.

nick said…
I don't know how it is in LA, but in Britain just about every colour and age group are struggling to find jobs. Though the jobless rate for blacks is no doubt much worse. The real problem is mass unemployment, with lots more job losses to come as the government slashes public sector spending and does little to create new businesses.
1:07 AM, July 12, 2010