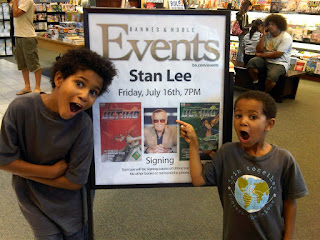 It's Friday night and I just got paid. I'm checkin' out the fella with the high top fade...
OK, I'm not. But here's all the randomness I am thinking about:
1) Stan Lee Mania: The boys wanted to go to Johnny Rockets for dinner tonight. I took them to the Cheesecake Factory at The Grove instead. While waiting eons for our table, we wandered next door to Barnes and Noble where we discovered that Stan Lee was doing a book signing.
1.5) Comic Fanatics On A Mission: I'm married to a comic fanatic and both my boys are also comic fanatics. Somehow they managed to snag the very last Stan Lee book signing entry wristband and ta-da, they met the man himself. To say they were star struck is an understatement. They were so in awe they have no idea what Lee said to them, but they got his autograph! 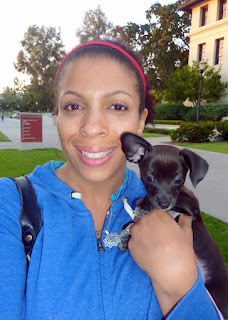 2) No Cheesecake For Moi: Sadly, even though we had dinner at the Cheesecake Factory, I only had the veggie chopped salad. I really really wanted some carrot cake cheesecake but I came home and ate celery sticks. Yes, you read that correctly. I just kept thinking about how a) I'm old and my metabolism just can't take cheesecake like it used to be able to and b) marathon training season is right around the corner. Speaking of which...
3) You Should Run The Los Angeles Marathon: Live in Los Angeles and want to train for the Los Angeles Marathon with the best darn running club ever? Join the L.A. Leggers and you WILL cross the finish line. Trust me, if I've done it, so can you! Training starts with just one mile on either August 7th or 14th.
4) My Baby Is Growing: Andromeda the puppy is now approximately 14 weeks old. We went out last Sunday afternoon -she rode around in my bag. Gosh, this dog makes me feel so LA!
5) The Eat, Pray, Love Trailer Is ANNOYING: Is it just me? Every time I see a preview for that Eat, Pray, Love movie with Julia Roberts, I want to cuss. Cuss and barf. My dear awesome sister Leili Towfigh tweeted a link to a reviewthat might explain why it makes me feel so barf-tastic. Methinks faux feel-good spirituality brings out the worst in me.
6) Wesley Snipes = Three Years In Prison: Homie didn't pay taxes for three years to the tune of $12 million. Clang, three years in prison. Is this karma for the comments he made in Ebony Magazine back in 1997 where he indirectly and stereotypically compared African-American women ("someone who's going to be mean and aggravating and unkind") to Asian women ("some place that's more compassionate")????????
lemme add some more ??????????
and even more ????????
7) I will never buy a Kidz Bop CD. That is all.
8) How Diverse Are Your Friends?: You ever have the experience where you scroll through someone's friend list on Facebook to see who else they know and see who you know in common... and then you notice that there is almost no diversity in their "friends"? I always notice that and it bugs me when folks have pretty much zero diversity. I'm like, for real? You don't know ANYBODY of a different color that you'll even be Facebook friends with?
9) Check Me Out On Huffington Post: I filmed a video with the fab Mallika Chopra for her Intent site/series. It's about helping your community's libraries. Check me out... it was a pretty decent hair day when we filmed. (wink!)
10) Heat Wave: Summer finally hit Los Angeles. That means I sit around sweating and wishing winter would return. Hmm, I really am a December baby. I want this hot weather -and the crazy people that come with it- to go away.
11) You Tryna Clown Me? This week somebody tried to passive aggressively make fun of me by saying, "Your hair looks like that dude's from LMFAO." 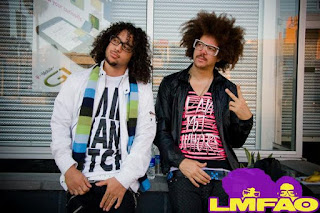 Yeah, whatever. I like his hair. It's cool with me. Not to mention, I clearly don't share the same standard of beauty because I don't believe everybody's hair has to lay flat up against their scalp, mmkay?
Email Post
Labels: Andromeda the Puppy barnes and noble comics diversity facebook huffington post L.A. Leggers libraries los angeles marathon Stan Lee summer the grove Wesley Snipes

nick said…
Er, how diverse are my Facebook friends? Not diverse at all. Ditto my blog except for yourself! I think that's mainly because Northern Ireland isn't very diverse yet, though that's gradually changing. I did have several other black blog visitors but they all went private on me!

Liz Dwyer said…
Nick,
Lack of diversity's understandable if you live in Northern Ireland... but for folks living in Los Angeles or Chicago or NYC, there's no excuse - or rather, the reality is that here in the US we still generally socialize outside work according to color lines. True, genuine friendships between people from different racial/ethnic backgrounds are not as common as they should/could be.

Are there any black bloggers based in Northern Ireland? I wonder! ;)

Liz Dwyer said…
Jasmin,
I haven't posted too many pics of my fro lately but it's nowhere near looking like the dude from LMFAO! I like that big wild hair look but not for every day. ;)
11:43 PM, July 18, 2010

K. Rock said…
Woo I don't know what's going around but this is like the third post I have read in the last few months about getting judged by the diversity of your FB friends. I have 1 non black FB friend and she is a co-worker. I would hate for you to scroll through my friends list and make some sort of assumption about me. There is so much more to a person.
7:52 AM, July 19, 2010

Liz Dwyer said…
K.Rock,
Sure, there's more to a person than their Facebook "friends" and people's definition of a friend varies considerably. But I do think lack of diversity in friends is a sign of how we aren't as far along in race relations as we'd like to think. Sometimes people don't have the opportunity to meet diverse groups of people, like Nick in Northern Ireland doesn't. It's common to hear black folks say they don't socialize with white people outside of work settings - and black and white women in this country still aren't, for the most part, friends with each other. And I guess I notice when someone is a white "progressive" L.A. resident who professes to be "open minded" and then there's no color in their friends... it's a big "things that make you go hmm" moment for me. I think it's just a sign that we haven't made as much progress as we'd like to think we have.
12:29 PM, July 19, 2010

R- N- said…
I hear what you are saying about FB friends. I am always a bit suprised when I see someone - especially from a city - not having any diversity among their friends. Among my FB friends, I have friends of all races. And yet I really hesitated to write this, because isn't that what WP say all the time - "I have friends who are ____"
But the truth is I do. And my oldest and dearest friends are of a different race than myself (we were the only white family in the neighborhood where I grew up).
When our family moved away for my dad's job, we feel out of contact for over a decade, but when I moved back in the area, I looked them up, we remade contact, and I still consider them to be my some of my closest friends and they have said the same.
Oh, BTW, I love your hair.
9:11 AM, July 20, 2010

Liz Dwyer said…
R-N,
Sorry I'm so slow to reply. It's been QUITE a week. Whew.

You bring up a good point...you have truly close relationships with people from different backgrounds, but other people who don't might casually add people on Facebook and then turn around and pat themselves on the back.