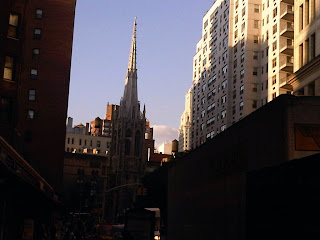 Without kids, without hubby... I'm here in New York.
Don't get too excited. I'm here for work. It is not party time, mmkay.
Yesterday afternoon I rode the R train to my friend's place for dinner and guest-room crashing, No sooner had I sat down in a seat on the subway car, a woman who was big enough for 2 1/2 subway seats sat down to my left.
It was boiling in the city, and hotter than hell in the subway, yet a thick, hot pink velour track suit covered her ripples. Sweat poured from her brow as she asked, "You know if this train stops at Canal Street?"
It wasn't clear who exactly she was asking - so no one responded.
After a minute of somewhat awkward silence, and since her entire right side was attacking me, I decided to speak up. "I don't live here but I think it does," I said to her.
"But you don't know for sure?"
I explained to her that I don't live in New York - I used to but I haven't for a dozen years - so I'm not as sharp on all the train stops as I used to be.
"Hmmph!" was all she replied - and then proceeded to get off the train at Times Square!
The second the train doors closed and she was a fading memory shuffling along the subway platform, the guy to my right muttered under his breath, "Dumb outta towners! She shoulda stayed on the train!"
Why he didn't speak up before she got off the train will forever be a mystery for the ages.
Email Post
Labels: I Love New York New York City subway trains

Cynthia said…
I can only assume that had she been thin and beautiful, or maybe even thin and average, he may have suggested something. And that his disdained image of her kept him from offering help. I say this because in my freshman year of high school, I too was pretty heavy for my age. I didn’t have much friends and no boys would give me the time of day much less even look my way. Then one spring day I just decided I did not want to look this way anymore. I lost 80 lbs in the course of 4 months. I had dropped down to a very thin 100 lbs. Not very healthy, but I was determined. When school started my sophomore year, I was a whole new person. Boys, friends, and opportunities were endless, one girl actually told me, and I would never forget this, “Oh you’re so pretty now, come hang out with us”. I guess I wasn’t good enough before. Who knows if that was this mans intentions, but my personal experiences says it so.
10:08 AM, July 28, 2010

Elita said…
I agree with Cynthia. As someone who has also been on both sides (post-baby, I am about 50 pounds overweight), I definitely notice a difference in the way I am treated. There are certain men out there who also simply cannot even be polite to women to whom they are not sexually attracted. I have been noticing this more and more lately. Men who will be kind and helpful to the woman they find attractive and downright rude and obnoxious to a woman who doesn't meet their "standards."
12:30 PM, July 28, 2010

Carolyn (Diary of a Sewing Fanatic) said…
Okay I'm on a totally different track here...you ARE in NYC?! *squealing* OHMYGOSH! Can we meet?! *LOL*

Seriously, I can't believe you are here without any advance notice so that I could beg and plead and promise not to be a stalker, and talk to loud and keep saying OMG, it's really Liz...and beg to meet you IRL.

Tafari said…
I hate being asked about stops on the NYC subway. Im OK with getting around but I prefer to ask & or looking at the maps before I get on the train.

nick said…
In my experience, some New Yorkers can be pretty arrogant about out-of-towners who don't know their way around. They enjoy keeping their local knowledge to themselves and not sharing it with others unless they have to. But that said, there are other New Yorkers who are really friendly.