Who's The Average Black Woman? 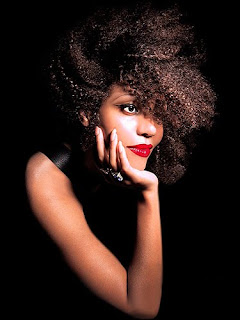 Over the weekend I was talking to someone about Tyler Perry's latest film, "Why Did I Get Married, Too." I thought the first one was terrible, and I don't intend to see the sequel - but I had no idea a discussion about the annoying depictions of women in Perry's films would lead to a debate over who or what is an "average black woman".
The exchange went something like this...
Me: I can't believe Janet Jackson signed on to be in this sequel. She was SO bad in the first one. Then again, pretty much everybody was bad in the first one.

Anonymous: It's all about a paycheck. Besides, Janet's not as cute as she used to be.

Me: I still think she's cute. But she can't act.
Anonymous: Nah. Not as cute. She's a lot more average black woman looking these days.
Me: What's the average black woman look like?
Anonymous: Well... you know... sort of, uh, YOU KNOW!
Me: No, I don't know.
Anonymous: Um... I mean, Janet's just not as pretty as she used to be. She used to be special and now she just looks like everyone else.
Me: "Average black women" aren't pretty?
Anonymous: No. She's just... dating Jermaine Dupri just made her more ordinary. She's not larger than life anymore.
I probably should've dropped it because I realized I was getting pretty annoyed. But, I just had to ask one more question.
Me: Am I an "average black woman"?
Anonymous: You're getting mad, but no.
Me: Oh really? Well why not?
Anonymous: Cuz you like Depeche Mode - and I'm not talking to you about this anymore because you're getting pissed off.
What clued Anonymous in that I was really displeased with this conversation? Was it the set of my jaw? The eerie silence while my eyes narrowed into daggers?
The thing is, I don't believe in an "average black woman" because the whole phrase just screams, "I like to run around nekkid with stereotypes!"
You notice how Anonymous threw the phrase around like it had cooties? It's like in Anonymous' mind, average black woman doesn't mean smart, well-read, well-dressed, well-groomed, kind, eloquent, beautiful, generous, and honest.
When I think of an average black woman, that's what I think of. I'm pretty sure Anonymous is thinking of something less flattering. Are you?
*photo courtesy of Flickr user The Global Girl
Email Post
Labels: black women Depeche Mode Janet Jackson stereotypes

D- said…
I was told this once:

nick said…
Ha, don't look at me, I have even less idea what an "average black woman" might be. About as obvious as the average white man I guess. Er, black, er, female, er, um....

Elita said…
Oh my GOD, I would have been seeing red as well. And what the eff with the Depeche Mode comment? I hope Anonymous had an apology for you because those comments were asinine.
6:46 AM, March 30, 2010

Anonymous said…
Anoymous is not your friend! Run! Whenever people say stuff like that to me ESPECIALLY if they are white I drop them like a bad habit. "Oh, so I'm different?" "Oh, so I don't act like I come from Harlem? So how does someone from Harlem act?" Get out of here with that BS!

The thoughts that this person has about Black Women exemplify the racism they have in their heart.
7:39 AM, March 30, 2010

Carolyn (Diary of a Sewing Fanatic) said…
Okay I'm on a whole nuther note here...seriously, you don't think Janet can act? I think she acts wayyyy better than she sings? *LOL* As for the other...I am just not surprised. After the fiasco on the Capitol steps during the healthcare debate...I'm just NOT surprised!
8:09 AM, March 30, 2010

i figure i am the average Black woman. SMart, cute, funny, smart, likes to read, likes to travel, from an intact family (mom and dad), college... you know. Just your regular chick. And I have a bunch of regular Black women friends that are just like me.

Val said…
As you know, Liz, attacking Black women is a sport in this country. Many people, like your anonymous acquaintance, play all the time and are almost never called on it. So that's why they were caught off-guard by your reaction.
9:44 AM, March 30, 2010

Liz Dwyer said…
D,
Warms the heart completely. Makes you feel SO special, doesn't it? I've also heard that I'm nicer than the average black woman. More approachable. And then I slashed their tires after they said that. (Just kidding. Sorta.)

Nick,
Whenver folks try to use the word "average" to describe a group of people they're bound for trouble if they don't have positive things in mind.

Elita,
I have heard that Depeche Mode comment more times than I care to admit. It just bounces off me at this point. Ridiculous and no, no apology.

Anonymous,
These sorts of ideas are so ingrained in our psyches, they come out and we don't even KNOW we thought that way. I think Anon will maybe think twice about what's average - and the negative light in which our society perceives the "average black woman" - I think these kinds of conversations are the way we take this crap apart.

Carolyn,
I liked her in Poetic Justice but in Why Did I Get Married I thought she was totally stiff, wooden, miscast. Only one who had it together at all was Jill Scott and I hated her character's role.

Black Literature,
I think of average like how you think, too. But I know too many do not, or have limited real-world exposure so they think of us as stereotypes.

Lisa Blah Blah said…
Here's one I love: "I don't think of you as black, I just think of you as [your name]." (Not said to me, but to a friend of mine.) La la la, must be nice to be "colorblind," but you know what? There's nothing WRONG with being black! It's okay if you see her as black! That's what she is and she's proud of it!

Dirty Red said…
I have been told I am not the average Black Man because I am not angry and blame everybody else for my fuck-ups. So I feel this post. What the hell is average? And Average compared to what? That is just like calling something or someone "normal". What the ha ha hell is "normal?"
4:09 PM, March 30, 2010

Liz Dwyer said…
Lisa,
That sort of statement implies faux colorblindness and yep, that there's something wrong with being black. I wonder when the day will come where folks WANT to be black instead of trying to get away from it.

Gunfighter,
Do you, me and Lisa all know the same people? ;0

Mel,
I know what you mean. I suppose it's about the intent with which one uses the word "average".

Dirty Red,
Folks should just insert the word "stereotypical" instead of average. They'd be a lot more honest in their discourse if they did.
8:05 AM, March 31, 2010

Aimee @ Ain't Yo Mama's Blog said…
That's a pretty offensive perspective from *anonymous* and I hope that conversation, if anything, awakened him or her to think (and speak) in less generalized terms. And as for Janet Jackson - what are they talking about?!? I think she is as gorgeous today as she was during Rhythm Nation. Maybe even more so!

On a totally different note - it was wonderful meeting you at the KaBOOM event on Friday!