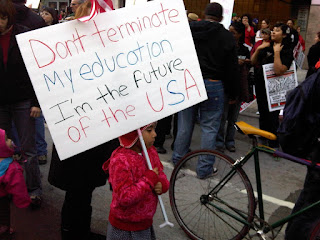 I didn't expect that I'd start crying during today's education budget cuts protest in downtown Los Angeles. But when students of all ages began chanting, "Save our teachers! No more cuts!" the tears came.
The sincerity, the passion - these were not apathetic, superficial teens and young adults. These youth were fired up and telling the stories of the impact of current budget cuts, and their worries about proposed cuts.
And then there was the little girl holding the "Don't terminate my education. I'm the future of the USA" sign. I can only describe her as resolute in her demeanor. So small but serious as a heart attack as she held her sign.
I don't know how many people attended the protest. It was hard to tell since I was in the middle of it. But, I was sad to see zero coverage on my evening news. Instead, 14 minutes into the broadcast, the news anchor spent 20 seconds talking about the arrest of five protesters out at Cal State Northridge.
Even if the mainstream media ignores what happened, they can't fully erase what took place today. People want change that's more than empty promises and they're willing to show up to say so. I hope attendees went home inspired to keep demanding that this state and this nation do right by education.
Email Post
Labels: budgets Education Los Angeles media news students teachers

The local TV stations here in the Bay Area were all over this yesterday. Especially when some college students went on to a freeway during rush hour and stopped traffic.

I also saw a piece about it on NBC network news. So fortunately it's getting some coverage.

Liz Dwyer said…
Val,
That's good that it got some coverage up north because seriously, I was SO surprised to see nothing on the 11:00 news but the 20 seconds about the CSUN students. It was all about that poor murdered girl in San Diego, the crazy guy in DC, the Oscars... just strange.

Yeah the UC Berkeley students have been getting rowdy for some time now. Yesterday really wasn't even that much compared to a few other things they've done. So just when I thought UC Students were a bunch of brats they surprise me and stand up for themselves. Lol
3:45 PM, March 05, 2010

nick said…
"Don't terminate my education. I'm the future of the USA". That's exactly the point. The lack of coverage is so typical of today's news values. So the Oscars are more important than people's education? Excuse me?
12:14 AM, March 06, 2010