Today's The Day YOU Need To Stand Up For Schools 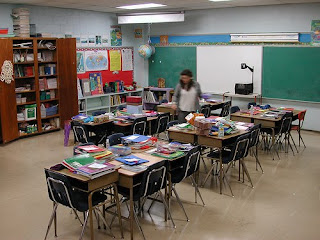 Two days ago one of my good friends sent me a direct message on Twitter about 4700 proposed layoffs in the Los Angeles Unified School District. I'd already heard about them, but what struck me was that this friend has no school age kids, doesn't work in education or hang out with teachers, doesn't talk about education all that frequently, and isn't even a resident of the city-proper. (He lives out in the Valley.) But, even he was concerned about the impact a layoff of that size would have.
This year's proposed pink slip distribution "would virtually eliminate school nurses and librarians, increase all class sizes, including a high of up to 44 students in middle school, and boost counselor loads to 1,000 students each."
Imagine being a seventh grade teacher with 44 kids in the room. After a day with that many students you'd probably want to prescribe yourself some anti-depressants, or find a medication that has a memory erasing side effect.
I know there are folks saying teachers should be able to get the job done no matter how many kids are in the room.. These same people probably believe teachers should have 100 students each, and unless every single one scores proficient or advanced on the almighty standardized tests, the teacher should get fired. Folks who think like that aren't usually classroom teachers - or very smart. Besides, do I want my sons in a room with that many other students? Uh, not unless it's a college lecture class. And, on top of those layoffs, nearly 1000 custodians and another 570 administrators are expected to get the boot.
It was bad but it wasn't 9,000 layoffs. Thank God for that.
I tried to reassure my friend that the district threatens these sorts of layoffs every single year - last year they threatened to layoff almost 9,000 people. However, what usually happens is by May, LAUSD scrapes together enough money to keep most folks. Last year, federal stimulus money helped save a lot of jobs, including ones at my son's school. Unfortunately, the final 2009-2010 budget laid off 2500 people and cut $132 million dollars. It was bad but it wasn't 9,000 layoffs. Thank God for that.
We sure need God (or someone super rich) to intervene this year. With a $640 million budget deficit, it's not looking good for LAUSD to be able to rescind the latest round of layoff notices. Schools that are just scraping by now are going to look like a bomb got dropped on them. Last week the ACLU filed suit against the district seeking to prohibit balancing budgets by laying off teachers. Turns out the layoffs are disproportionately impacting schools in low income areas with populations that are predominantly children of color.
$17 billion has been cut from education in California in the last two years. The University of California system raised tuition 32%. Community colleges are cutting classes, firing professors and eliminating summer sessions. The pot is boiling over and a whole lot of folks have decided it's time to tell the State of California and our school districts that enough is enough. No more balancing budgets on the backs of our children.
Hundreds of education protests are slated to go down today across California. They're being called "Stand Up For Schools" rallies. Before-school protests, student and faculty walkouts at colleges and universities, and a huge rally in downtown are going to happen here. If you want to participate, you can search the Stand Up For Schools event listing. Something is happening all over the state so if you don't live in LA, you can still let your voice be heard.
Even if you're not in California, please support us. We're responsible for 13% of this entire country's GDP. We're in educational purgatory right now, but if we go to hell out here, eventually you will too. Actually, I know you're local schools are in similar straits. Budget cuts are hitting nationwide.
Funny... I haven't heard anything about cuts to defense budgets, have you?
Use the #standupforschools hashtag on Twitter. Tell your friends on Facebook why you're standing up for public schools. Let people know that the biggest cuts to public education since the freakin' Great Depression in the most populous state in the nation can't continue.
photo courtesy of Flickr user Editor B
Email Post
Labels: #standupforschools budgets california college Education Los Angeles Unified School District protests Schools students teachers twitter

Anna Resendiz said…
I'm thinking there might be a greater lesson to learn here. I'm a substitute teacher. I taught in Southern California for five years as a sub. I now teach as a sub north of Chicago. I even taught English at a private school in China for a year. What I see in schools is that the kids appear that they don't want an education half the time. They want to have fun and be creative. They arrive to school exhausted from watching too much TV sometimes while parents are recovering from having to work too long hours. What I think would be helpful is that we all cut back our working hours and learn to live on less so that we can truely support our children and get them excited about learning again. I refuse to scream at the children and belittle them just to get them in line and quiet enough to actually be able to read and think. We throw work sheets at them that don't seem to relate to anything important in their lives. The whole educational system needs to change. Perhaps parents can volunteer more in their kids classrooms. When the teachers get laid off and collect unemployment they can spend that six months volunteering and supporting those teachers left with the huge classrooms. I've never seen a class where everyone is truely happy when there is only one educator in the room. The discipline has to be so intense that no one dare speak out of turn and the excitement of learning can not bubble out of our children because the teacher fears the kids are getting out of hand and will end up hurting one another.
There are some really awesome teachers that are able to find a good balance. But there are some kids that expect that strong discipline is waged from outside themselves. They don't know how to find the ability to control their own behavior from within themselves.
Even the good teachers that have a good sense of humor with the kids often threaten to beat them if they don't shape up, which even though done as a joke in a way, reminds the kids that they will get in trouble if they don't keep their thoughts to themselves and only support the thoughts of the teacher so the teacher thinks they are good kids and doesn't get upset with them.
It's hard to explain. I think all classes need at least two adults that are totally dedicated to allowing children and youth ask all the questions they have in their curiousity. Otherwise children get bored and shut down their natural yearning to learn. Unfortunately I don't have time to edit what I've written and there are probably dozens of typos but you get the essence of my concerns and can read between the lines with your own experience and what you observe.
5:01 AM, March 04, 2010

nick said…
This scale of layoffs is just crazy. Isn't it obvious that a high standard of education is essential to the future of the country and its economy? So how can that be achieved with classes of 44? And as you say, how about cutting defence budgets? A tiny fraction of the astronomical military budget would maintain all your schools with no need for a single layoff.
8:03 AM, March 04, 2010

Liz Dwyer said…
Anna,
The great Marva Collins said years ago that she wouldn't have her students be worksheet dummies - and I've taken that to heart since then. I've always felt that no talking in a classroom is a sign of a bad teacher - as is kids being buckwild. Kids talking about what they're learning is the way to go. I'm a big supporter of team teaching - and I definitely think moving to a team teacher model where one is the lead, and the new teacher is the apprentice (like how other countries do) benefits both teachers and students. Back when schools had more TA's, that sorta happened if the teacher actually let the TA do something other than copy those worksheets.

Nick,
Yes, totally crazy. It's like the powers that be are trying to squeeze blood from a rock - telling teachers they should be able to get the same results with more students and less resources. The sad thing is that there really are those who think that a really excellent teacher can get a class of 44 kids to learn as well as one of 28. And dedicated teachers will do their best to make it happens but it's not easy.
8:51 AM, March 04, 2010

Nerd Girl said…
This is quickly becoming par for the course nationwide. On the front page of the Clarion Ledger today (Jxn, MS) there is a story about a bill passing our senate which would furlough teachers AND shorten the school year. I've not had a chance to read the story because my computer keeps locking up, but I cannot believe that the state is considering shortening the school year - Mississippi students historically underperform and have horrendous drop out rates. So the money-saving solution the lawmakers came up with is to reduce classroom time? Un-be-lievable.

tattytiara said…
Yeah, whether or not you have kids yourself, the next generations are the ones that are going to be running things when you're retired, so there's no pretending these things don't matter to everybody.
2:10 PM, March 04, 2010