Not Every Black Kid Can Dance 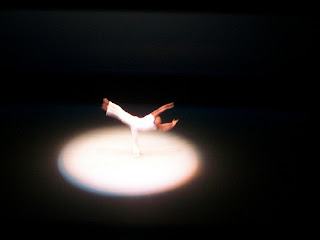 Gorgeous weather yesterday afternoon, so I took my sons to our neighborhood park. As I watched my boys swing and climb on the monkey bars, another mom struck up a conversation with me.
She asked me where my kids go to school. I didn't want to tell her so I quickly diverted the conversation by saying, "My boys looove school," and then I asked where her daughter goes.
She shared that instead of attending the neighborhood school, her daughter goes to a charter school. I know the woman who's the assistant principal at this charter school, and from what I've heard, they're doing great things.
She began telling me how much her daughter loves the charter school's dance focus, but, "Some of the kids aren't such good dancers, you know?"
I nodded my head understandingly. I wasn't such a good dancer when I was little, and these days I get a good chuckle out of my two son's attempts at imitating Michael Jackson. But as this mom continued to talk, I quickly realized she wasn't thinking about kiddie awkwardness.
"They have a hard time because all of the kids are like my daughter," she said. "All Spanish people, and we don't dance as good as you black people."
Uh...say what?
"So I thought I'd come over here and say hi and see if you will enroll your sons in the school because then maybe our dance performances will be better."
I kid you not, I almost busted out laughing right then and there! I wanted to ask her, "Seriously? Don't you know black people aren't genetically programmed to know how to dance?"
Do we need a new hashtag? #NotEveryBlackKidCanDance? And what's this mess about Hispanic folks not being able to dance? Uh, really?
But oddly, I started feeling a teensy bit sorry for her. I mean, as I talked to her, it came out that she wasn't born here, which means she came to the States and learned this racist crap from other folks and from the media.
It was also obvious she was totally sincere in thinking more black kids = her kid's school's dance performances improving. Then the one black mom she stumbles across at the park, moi, ruins it all!
Yeah, I'm that mom who prays daily that her sons get into, gasp, a math/science/technology magnet. I told her how I'm trying to get my sons into a super cool school with a robotics program, a science lab, and a one-to-one laptop program for grades 3-5.
"But don't your boys like dancing?" she asked.
Sure they do, but instead I told her how my eldest says that when he grows up he wants to be some sort of scientist, or else design artificial body parts for people, and my youngest says he wants to be a rock star, a skateboarder or in the military. (BTW, we're already arguing about all three of those choices.)
Her disappointment was palpable, but sorry, even if they were the best dancers in Los Angeles, my kids don't exist to give street cred to any school's dance performances.
We parted ways with her encouraging me to check into the school if the magnet thing doesn't work out.
Yeah, um, sure. I'll get right on that.
photo courtesy of Flickr user Bob B. Brown
Email Post
Labels: african american black children Boys charter schools Hispanic kids Los Angeles magnet schools racism Schools

Nerd Girl said…
You almost bust out laughing - well I did bust out laughing and I'm at work. I cannot even begin to imagine what my response would be if somebody approached me to enroll my black child in a school for the sole purpose of improving the dance team. Just wow!
7:12 AM, March 15, 2010

Jameil said…
I don't know how to appropriately express the shock/confusion on my face via the internet. "But don't your boys like dancing?" she asked??? AFTER I say I want to focus on their BRAINS??? I don't get it at all! You know an old coworker once said, "You're a good dancer. Why aren't you a Wild N Out girl?" Besides my obvious disdain for Nick Cannon, I'd like to USE my intelligence! Mess.
7:56 AM, March 15, 2010

Liz Dwyer said…
Sally,
Oh yes, my kids were born knowing all the moves performed on America's Best Dance Crew! We just birth them like that. ;)

Nerd Girl,
It was one of those moments where if someone had told me before I became a parent that people would seriously say stuff like this, I wouldn't have believed it!
8:26 AM, March 15, 2010

Liz Dwyer said…
Jameil,
A Wild N Out girl??? Oh goodness, as if that's a real goal in life. Like any good performing arts school, the focus at this charter is on academics and developing dance skills, so I'm sure if my boys did attend school there, they'd be fine academically, but there's a whole lot of opportunity in LA to develop the performance side of life - not so much the math/sci/tech side. Sigh.
8:33 AM, March 15, 2010

Carolyn (Diary of a Sewing Fanatic) said…
Seriously?! And she was disappointed that you wanted MORE for your sons...Seriously?
10:31 AM, March 15, 2010

nick said…
It clearly never occurred to her that your boys (and you) might be aspiring to something a bit more demanding than dancing. And Spanish people don't dance as good as black people? Insulting Spaniards and blacks at the same time, that's not bad going! She sure needs her head straightening out a little.
1:23 PM, March 15, 2010

Liz Dwyer said…
Carolyn,
Disappointed for what are essentially selfish reasons, I think. If my kids can potentially benefit other kids, well, isn't that what should matter most?

Nick,
I know, folks of Hispanic descent are no more or no less capable of dancing! If one of my boys ends up being a professional dancer, great, but a super solid academic foundation is essential no matter what.
1:39 PM, March 15, 2010

Marcela said…
Oh my! This is sad! Can not believe that woman had the nerve!

Liz Dwyer said…
Marcela,
With your dancing abilities, clearly we need to enroll you at that charter school! Can we "Benjamin Button" you so you can be in elementary school again? ;)
5:16 PM, March 15, 2010

MartiniCocoa said…
I would have told her to go dig up Michael Jackson to help the school's performances.

I'm almost a little done at giving poc a pass on the being ignorant thing and that goes across the board. Maybe you're poor, you're not from here, you've never met a: Asian, black person, Latino...don't care if you come up to a person don't be an offensive arse.

Kristen Howerton said…
I have quite a few youtube clips that I'm ready to add that hashtag to, as very clear evidence that this stereotype is not universal. I have never seen a more awkward dancer than my oldest son. Oh my word.

Liz Dwyer said…
IANSJ,
Oh snap! ;) Then she would've gone home and written on her blog about, "Let me tell you about the crazy lady who said I should did up MJ!"

Browne,
I keep thinking about how I had a bit more empathy and understanding for her because she was a POC, but it's still wack. I guess it sort of reminded me of when I lived in China and COPS was broadcast there on Star TV - and so I knew that's the image of black folks that people were working from. Hmm...