A Bus Ride For Destiny 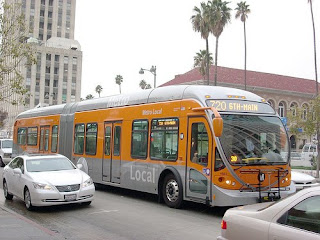 1 : something to which a person or thing is destined.

2 : a predetermined course of events often held to be an irresistible power or agency
Or, Destiny is a little girl riding on the bus last night. She couldn't have been more than four or five and she made everyone's heart melt.
"My name is Destiny," she said to the woman on her left. "I go to school. Do you go to school?"
The woman nodded her head and said, "No English," but Destiny kept talking.
"I have friends." She lifted her left hand and began counting her fingers. "One, two, three..." - She paused at her third finger. "Just three friends." And again, she spoke to the woman on her left, "Do you have friends?"
By this point, the packed bus was almost silent, everyone looking at and listening to the small girl with such a clear, musical voice. Her blond hair was completely disheveled and despite the chilly Los Angeles evening, Destiny had on a stained pink and white t-shirt with tiny red hearts on it. Her bare arms arms were covered with smudges of dirt.
You know, the yellow and purplish sort of "dirt" smudges that your heart knows are not really dirt smudges because the smudges are spaced finger-width apart on the arm -as if an angry hand had recently grabbed that thin arm. But there is nothing that you, a random passenger on a bus, can do about those "dirt marks".
"I like riding the bus." Destiny said into the air, to anyone who'd listen. "The bus is fun. Do you like to ride the bus?"
The entire bus burst into chuckles and grins, not so much over the knowledge that only a small child enjoys riding the bus in Los Angeles. It was more the freshness, the innocence, the radiance of Destiny's spirit. Her happiness despite dirt marks and despite not having a coat.
All too soon, the heavyset woman and hard-faced man riding with Destiny, pulled the cord to request a stop. As the bus doors opened, Destiny was propelled forward by these two adults in charge of her. Her voice called out to everyone, "Bye, bus! Bye, bus people!" and then she was out on the street.
My window was on the street side so I got a long look at Destiny jumping up and down on the sidewalk. As the bus pulled away my heart broke to see that along with no coat, Destiny only had on a thin pair of much too short pink leggings, no socks and a pair of sandals.
I can only hope that the, "something to which a person or thing is destined," is better than what's going on now for this particular Destiny.
photo (cc) Flickr user LA Wad
Email Post
Labels: bus adventures child abuse children Los Angeles Poverty

Liz Dwyer said…
1969,
I know. I had my writing notebook out and so I wrote down what was happening when it was happening... but even so, the heartbreak would stick in my mind regardless.
9:51 AM, February 05, 2010

nick said…
I would be agonised if I was in that sort of situation, seeing an obviously deprived and maltreated child I couldn't do anything about. You couldn't even report the parents if you didn't know where they lived. Very sad.
1:16 PM, February 05, 2010

Daniel said…
Los Angelista,
“It was more the freshness, the innocence, the radiance of Destiny's spirit. Her happiness despite dirt marks and despite not having a coat.”

What do you give it? 6 -7 more years, until that’s all totally gone?
What’ll it be, drugs or further abusive relationships without a clue as to why?
Figueroa Street? (Well, never seen a whitegirl there, but they gotta be somewhere.)

I’m not trying to be mean, satirical or bitter. Rather brutally realistic about what happens. I’ve had early-life personal friends head right down that sink-hole. And worked with kids as they descended it.

Liz Dwyer said…
Victoria,
I wish as well. It's hard to see children in circumstances like this.

Ian,
I know. I want to believe she'll end up being the statistical exception, but the odds of that happening are not good.

Nick
It is hard to see it and not be able to do anything about it - and her energy was such a contrast with the rest of her circumstance.

Daniel,
I don't know if even six years. Realistically, it could be much less time before she starts acting out in school, etc. But sometimes kids are able to make it thru despite the hell of their existence.

I know you're not being mean, it's just real, and that's what's hard about it. Every day I see a poster for that stupid Valentine's Day movie that's coming out with Queen Latifah and Jamie Foxx and I just think about how many millions were spent to make a movie that looks like total b.s. - the extremes of wealth and poverty in this city are mind-boggling.
10:45 PM, February 05, 2010