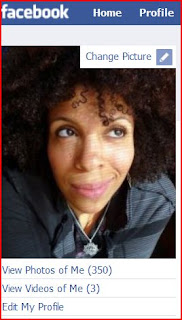 Back in the dark ages of 2007 I began to bug my husband about Facebook. "You should join. All our friends from Chicago are on there."

And he'd disdainfully reply, "For what? It seems so stupid."

I'd wax poetic about how easy it made it to keep up with what everyone was up to... and he still refused to join. He just checked out people's pages from MY page.

Then this past spring his mom joined. "How's your mom on Facebook and you're not?" I asked.

I think his mom being on when he wasn't made him feel tres uncool, so at the beginning of June he asked me to help him set up his page. I was totally giddy about him joining and I even helped him pick out his profile picture - tough to find one since he hates being photographed.

I've never spent that much time visiting his page and don't comment on it too much because, well, I see him every day. We don't leave cutesy messages on each other's pages either. I've never been one to live in his pocket and Facebook wasn't any different in that regard. Plus, he doesn't check his more than once a week so it's not an efficient method of communicating with him.

In case you're wondering, no I didn't "marry" him on Facebook either because I think that's stupid. In general I don't "friend" people I don't actually know, and if you know me, you know I'm married. You shouldn't need Facebook to tell you that.

You know where this is going, don't you? DRAMA!

I've heard of Facebook causing relationship drama and I totally didn't get it till now! Almost seven months later I haven't exactly defriended my husband, but I've blocked his access to my friends list and my wall!

It all started when he interpreted one of my not so happy status updates as being about him -which is was not, but he was convinced it was and he was all salty about it. This argument did not end well and I'm sure I said something evil in response. (Why am I sometimes so insanely good at being evil?)

Now, I haven't tallied whether I have more male friends than female friends but yes, I've always had lots of friends who happen to have XY chromosomes. My husband has known me since I was 17 but he sometimes forgets that he used to be one of those friends. We were friends for like 7 years before we got interested in each other.

This threw me a little. What was up with the jealous vibe? I mean, am I really gonna be checking for somebody I went to high school with over 20 years ago just because they write on my wall in full public view, "Nice to see you doing well and still looking good."

Seriously, guys, you can't get all, "Why's that dude saying you still look good?" Be glad and tell your girl, "Yes, baby. You sure do look good!" and be grateful she keeps herself healthy.

For real, do guys want people to write, "Wow, you were so cute in high school but you've really let yourself go!" on their girl's page?

Anyway, the final straw was him asking me why I was friends with someone he didn't like. I told him if he couldn't handle my statuses, comments, or friends, he didn't need to see them at all. So I set all my privacy statuses so he can't see any of those things.

If you're thinking he sounds like a jerk, no, he's not. He's a perfectly nice guy - not perfect, but he's a good guy. It's just that there's something about Facebook that has brought this drama out of him and wow it's annoying!

If you're thinking I should be more empathetic to his fragile male ego, well... I don't like spending a lot of time catering to egos, and in my mind I keep thinking, jeez, it's just Facebook! I seriously can't believe we're having arguments over freakin' Facebook!

I know he's partially mad that I can still write on his wall. He was trying to get back at me and block me the same way, but he got frustrated trying to figure out how to access and work the Facebook privacy settings/block lists because, well, he's not as tech savvy as moi. Hehehe.

I'm realizing the potentially awkward thing about Facebook is that all the people you know from different facets of your life are all thrown together in one big jumble. Folks from high school plus Depeche Mode friends. Plus college friends. Plus teacher friends. Plus friends from my crazy club kid days... plus my husband. All in one spot. Great in theory. Maybe not in practice.

Whatever it may be, I can now testify that Facebook relationship drama is real!

Anonymous said…
No, I want ladies to write: "You were so hot and handsome in high school and you still are." Is that too much to ask?

nick said…
Wow, that's weird. I'm not the jealous type at all so I really don't understand his absurd paranoia. I don't care a less what Jenny's got on her Facebook page, how many male friends she has etc. I'm confident about our relationship so why should I fret? I hope he chills out soon and takes a more relaxed attitude so you don't feel so harassed.

Lucrecer said…
It is more than real. It is a destroyer for real. Brings up all kinds of crap that you would normally not deal with...just a mess is all I can tell you it has done for my relationship. Mess. And, it is because of men's fragile egos.
8:27 AM, December 03, 2009

I let him have his space and I have mine. It seems to work for us.

African American Mom said…
Oh have I experienced this samethinhg but myhusband is no ton facebook. I have tried and tried but he could care less about it. I thought mabe he would change his stance if he had a page but I see in your case it does not matter.

Jen said…
The main drama with us over facebook is that the exchange kids send things to D AND me, and I always respond and he never does (because he never checks FB) and then he gets jealous when they respond directly to me the next time. LOL.
10:46 AM, December 03, 2009

Liz Dwyer said…
Ian,
Ha! No, not too much to ask! You're the epitome of aging gracefully. So you've got some proof of women having Facebook angst too. Well, all I can say is don't encourage Wendy to join. Things will only get worse.

Mouzhan,
You too??? Good lawd. If he reads it, I'm sure he'll completely commiserate with Eyo and back his perspective up completely.

Nick,
I read something about how women are dominating social networking sites like FB so it makes sense that men aren't as keen to join. It's weird, I don't mind him reconnecting with women he's known over the years, especially not the hoodrats he went to high school with. Yeah, as far as paranoia... lol, don't get him into a convo about secret societies and the illuminati and all that! He can go on for DAYS!;)

Lucrecer,
Ugh, what is up with these egos? Sorry to hear that you've been going through similar drama.

1969,
See, I should've set it up like that because we're very much about letting each other have space, but then you have to deal with people being all, "How come y'all ain't friends?" Ugh! I'm glad he joined because I think he has reconnected with lots of people he fell out of touch with but I think we need to keep it more separate.

African American Mom,
So your husband gets upset about your socializing on FB even though he doesn't even have a page? Goodness, we ladies can't win!

Val,
One of these days we're going to find out it's all part of some sort of government scheme to track our activities and thoughts. Oh wait, that is totally something my husband would say! ;)
10:49 AM, December 03, 2009

Liz Dwyer said…
Jen,
Haha! We've had a little bit of that too. My husband wonders why some friends write on my wall more than they write on his. I told him it's because I respond!
10:50 AM, December 03, 2009

Jameil said…
ROTFL @ He was trying to get back at me and block me the same way, but he got frustrated trying to figure out how to access and work the Facebook privacy settings/block lists because, well, he's not as tech savvy as moi.

Daniel said…
Los Angelista,
I'm too afraid to do MyFace.
I wouldn't even know what to do with it.

heartinsanfrancisco said…
I am not a big fan of Facebook although I have a page which I rarely visit.

While the idea of catching up with people from the past is intriguing, I think the whole "friend" as verb thing is silly and reminiscent of junior high school.

Your husband has you NOW. He's the one you chose to grow old with (while looking young forever, of course) and I hope he figures that out soon.
11:54 PM, December 03, 2009

Liz Dwyer said…
Jameil,
I am basking in my tech supremacy! Hahaha! I've had to block his mom from some stuff, too. Just dra-ma! Thank goodness my parents avoid FB like the plague!

Daniel,
I'm sure some folks our age tend to only be friends with people they already know so I'm not sure if you'd exactly meet any new people. But you could try!

Heart,
I still find it hard to believe that we "friend" or "defriend". It IS pretty childish. I don't know about the looking young forever part since the gray hairs are rapidly spreading, but he does have me now for sure. I hope he chills out a little.