Dealing With Hot Weather On A 20 Mile Run 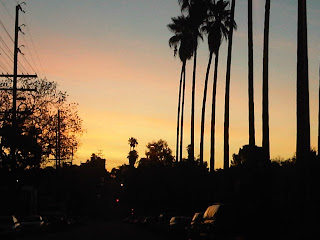 On Saturday I ran 20 miles as part of my training for my second Los Angeles Marathon. I'd been amped for this run since last Sunday's 11 mile jaunt along Sunset Boulevard because I really enjoy running long distances. I like taking in the scenery, watching people along my route, listening to my music, and being in my own space. It's nice to not have to think about anything other than putting one foot in front of another.

However, more than anything, I like the challenge of long distances. I enjoy finding out the answer to the question of whether I can really go that far or not. I'm not a particular speedy runner but I have no issues with going the distance.

On Wednesday I worried the run wouldn't happen because I had a fever of around 101. Perhaps I've passed into the space of running addiction since my main motivation to get better was my desire to complete my 20 miles run. I took to eating lots of garlic and downing NyQuil and by Friday night I was feeling much, much better.

That night I spent a some time fine-tuning my running playlist and getting all my supplies and running snacks together. Yes, I eat snacks while I'm running - I need stuff to keep my energy up and refuel since I can burn almost 3,000 calories on a 20 mile run.

Saturday morning I got up at a little after five a.m., ate my peanut butter on toast and drank my Earl Grey tea (plain, no milk or sugar) just like I always do before a run. I also took some DayQuil because I was still feeling the cold symptoms that had latched on to me earlier in the week.

Around 6:40 I headed out the door and hopped in the car for my drive out to Santa Monica. The glow of the sun coming up in the east had me positively crowing because it was so gorgeous and wow, how can you not feel energized and happy when you see a sunrise like that?

Two hours into my run, I was hating that sun. It's been so cool in Los Angeles over the past few weeks that I haven't run in hot weather in at least a month. I'm out of practice.

Since it was nice and cool when I began, and I was really feeling good, I ran the first three hours a LOT faster than I normally do. Unfortunately, there was no cloud cover and the heat (it was up to around 76 degrees where I ran yesterday) really got to me in the last five miles.

I found myself saying out loud, "I'm gonna throw up." And at the end of my run I got sick and barfed in some bushes.

I didn't want to slow down for a couple of reasons. One, I just wanted the run to be over. I figured the slower I went the LONGER I'd have to be out in the sun. Two, my running group sort of split up on the return trip back north to the Santa Monica Pier and I ended up running the last few miles with two guys who are probably ten years younger than me. My ego made me want to keep up with them. I just didn't want to come off like the granny who couldn't hang. It was a mistake for me to not slow down.

All this probably sounds horrible and like the worst experience ever. It wasn't. Every run has its ups and downs and even though I got a little ill, I still had a lot of fun. I laughed a lot during the run, sang along to my music, and as usual, I observed all the weirdos hanging out in Venice. And I have learned yet again about listening to your body and checking your ego at the door. I can never learn that lesson too many times.

Later on in the day when people asked me, "So what have you been up to?" it was fun to see the look of shock on their faces when I told them I'd run 20 miles that morning. -- Oh wait, that's probably my ego that likes that shocked look, isn't it?

nick said…
I admire your persistence and self-discipline. It must be doing you a hell of a lot of good.

I once had a severe cold which had been hanging on for about a week. In desperation I took a very long, very brisk walk, and the cold vanished immediately afterwards. Exercise is very beneficial!
2:28 AM, December 21, 2009

TraceRaces said…
Wow - way to tough it out. It's funny that even after getting sick and pushing our limits, we are still amped to get out there again. GO LA!
5:45 AM, December 21, 2009

Daniel said…
Los Angelista?
You barfed after a tough run?! You, lady, are now an Official Running Addict! LOL! Got the ‘Badge of Honor’ all over your shirt now, lol! (Had “black toenail” yet, lol). Kept the pace high because you refused to let those guys go? You’ve been bitten girl! And you’ll love every moment of it, especially as you reflect backward in life, to be so involved in “living” your life (verses watching it waste by), so in tune with your body and its abilities. Too many people miss out on those experiences nowadays. Sad.

Standard line of recovery from illness, to be able to do any serious running is - 2 days off any hard running for every day of fever. The body needs the recovery. But, I fully understand; when you got that ‘goal’ locked into the mind, dropping important training runs just kills you. I’ve done it plenty of times, lol. Doing hard, hard track Interval repeats, in the heat, all along knowing I’d be better off with a Recovery run and then I end up puking on the last 1,200 meter repeat, legs feeling like they’ll fall off.

You ever thought of doing the Ragnar Relay Race through LA? I love the team relays, because they are so different from the individual nature of all other racing.
12:38 PM, December 21, 2009

sippinwineman said…
While I'm typing this, my shoulders and fore arms are recouping from 4 hours of shoveling snow (okay, there was a snowball fight in there too, but c'mon!. . .) 76 degrees?! I've gotta deal with a high - HIGH!! - of 37 degrees tomorrow.

Marcela said…
I would love to know what kind of snacks you take along with you, what does your pack look like, how much water you take??? Sorry! But would love details! I ran a half marathon a couple of years ago and have always thought of doing the whole thing!!!
5:44 PM, December 21, 2009

Liz Dwyer said…
Nick,
It is a lot of persistence, for sure. I like to get out and walk when I have a cold because I think getting your blood pumping helps you get better. I ran with my cold because I didn't have too much congestion in my chest at the time. Now I do, which isn't exactly great but I'm feeling a LOT better.

Just Cause,
It's true, I was soooo looking forward to my next run, even after this one being so tough! :)

Daniel,
Haha! Yeah, I should get a medal of some sort. I lost 3 toenails last year but I'm trying to keep that in check this year. We'll see if I'm successful or not.

I probably should've waited a bit longer after the fever to run but yeah, I did not want to. Ragnar Relay Race... wow, that sounds kind of fun! Plus, Santa Barbara to Dana Point would be all kinds of beautiful!

Sippinwineman,
Shoveling snow is no joke of a workout! We're not so warm anymore. Down in the 60's - much nicer to run in.

Marcela,
Here's a pic of some of my snacks: http://twitpic.com/u6ar0 - but I ended up not using too many of those because it was so hot. I ate more pretzels and goldfish on my run - I wanted the salty snacks since it was so hot. I took about 16 oz of water and 16 oz of Gatorade - and then my running club has refill stations. Next time it's that hot I might take all Gatorade and then just refill with water. You should definitely think of doing the whole marathon. Train with the LA Leggers starting in August. They make it fun and manageable!
3:59 AM, December 23, 2009

Kristen Howerton said…
I love reading about your running stuff. I am a newbie and doing a half in January in Orlando, and then then a local half (Surf City) in February. I've been toying with the idea of doing the LA Marathon, since I'm already knee deep into training. But I'm also toying with the idea of never ever running again, because . . . ouch. I did 12 this Sunday and have been walking like a grandma for three days.

I'm glad to hear someone else runs with food. I am a hungry girl when I run and that GU stuff does not cut it!

At the Disney half I'm running, I'm meeting up with two friends from Haiti. They train all year long in sweltering 100 degree heat and humidity. Whenever the weather is bugging me, I think of them and feel humbled!
5:09 PM, December 23, 2009