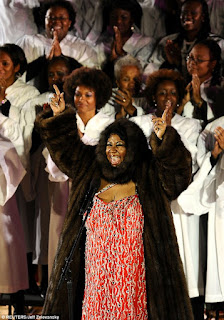 This morning I ran 14 Miles.

People always tell me, "I'd get bored running that long!" and it's true, when you run 14 miles you have a LOT of time to think about incredibly wonderful and noble topics like universal health care, the possibility that the guys hanging out on the corner will one day have real, living-wage jobs, the end of racism, everybody in the world learning to read... saving the whales.

But despite those noble, worthy subjects, my mind wandered to...

1) Tiger Woods: I didn't sleep with him and even if 75% of the world's women come forward and say that they also knocked boots with El Cheetah, as long as I didn't and I'm not his wife, I don't want to hear about it anymore.

Seriously, how is the one mistress salty he has other hookups? What's she gonna do? Sue him for cheating?

Sigh... I hope it was good for the ladies and they are supremely happy with their "I Slept With Him Too!" 15 minutes of fame.

2) Aretha Franklin: It's been confirmed. Aretha Franklin and I have almost nothing in common: I like to wear bras that keep things from hanging down around my belly button AND I hate fur. She doesn't.

I know her groveling hanger-on types can't say no, but can't they just once beat her up and force her to put on a bra that works? How could her sychophants let her come out of the house to light a Christmas tree looking like this? The Baby Jesus would've wept if He'd seen it!

For real, if it was cold enough to wear Animal Planet (BTW, where were the PETA people?) up on her head, she needed to cover her breastesses with a scarf, a hanky, a Kleenex napkin, something! I know that "Intervention" show is about drug addicts, but can we have an extra special episode for Aunty ReRe's tatas? Please?

3) Why, George Michael? Why? In honor of this week's World Aids Day, George Michael was all Chatty Kathy about the fact that he's still getting busy with strange disco sticks because he likes variety.

I like variety, too. That's why I buy the assorted box of chocolates and I have more than one pair of shoes.

But good ole George says, "It's just who I am."

Pfft! That's the kind of dumb stuff my six year-old says to justify his ashy knees. I can hear it now: "Ash is all-natural. It's just who I am."

I still love George even if he clearly has issues. Whoo, that man can sing! Let me go listen to "Jesus To A Child" for the millionth time and cry when he croons, "And what have I learned from all this pain? I thought I'd never feel the same about anyone or anything at all." SOB!

Wait, ain't that the song he wrote about his lover who died of AIDS? Oh snap, it sure IS! Clearly, Mr. Variety Pack hasn't learned anything from all that pain he was in. He's not just "Kissing a Fool". He is a fool.

4) George + Aretha: The one thing I do have in common with Aretha Franklin is singing a duet with George Michael. Never mind that you've never heard it. George and I have sung together plenty of times and in lots of places: On trains, in airplanes, in the car, the shower, lots of bedrooms, kitchens... pretty much everywhere EXCEPT the bushes of Hampstead Heath.

Anyway, remember the good ole days of not wondering how Aretha doesn't topple forward and not hearing George being all "I prefer the Johnson & Johnson variety pack!"?

Remember when singers were just singers and the media didn't throw you all up in their personal Kool-Aid? Let's travel back to 1987 and hear Aretha and George singing "I Knew You Were Waiting":
George Michael & Aretha Franklin - I Knew You Were Waiting F
by zocomoro
"Like a warrior that fights
And wins the battle
I know the taste of victory
Though I went through some nights
Consumed by the shadows
I was crippled emotionally
Somehow I made it through the heartache
Yes I did, I escaped
I found my way out of the darkness,
Kept my faith (I know you did)
Kept my faith"

You see those lyrics, El Cheetah? I highly suggest you base your tell-all sit-down interview with Larry King on them. Then the world will forgive you and the endorsement ducats will keep rolling in.

As for the rest of you... Now do you understand how I occupy myself during a 14 mile run? Trust me, there's plenty to think about. But don't worry, I only spent a tiny portion of the time musing over such trivialities. Despite the efforts of our media, El Cheetah, Aunty ReRe and Mr. Variety Pack were in and out of my mind within a nanosecond.

I promise I went right back to wondering what exactly is going on in Afghanistan, what is up with the never-ending saga of health care reform and of course, saving the whales.
Email Post
Labels: AIDS cheaters crazy people gossip I know you think I'm crazy after reading this Music Pop Culture Running

Sharifa said…
I had not seen or heard of Aretha's peculiar sartorial choice. Thanks. That was a great song though - I also Love the live version of George Michael's duet with Elton John. Now George supposedly scoffs at the idea of Elton helping him with his issues...

Daniel said…
Los Angelista,
Wow. I sure don't think of that stuff on my long runs, lol. I must be boring ...

And maybe George Michael found Tiger in the "ruff".

Liz Dwyer said…
Sharifa,
I'm glad to ahem,"expose" you to Aunty ReRe's favorite mode of dress. I swear, she has one low cut spaghetti strap grown after another.

George needs to get it together and recognize he could learn a thing or two from Elton. Ah, ego.

El Cheetah and his now stable-full of paramours... sigh.

I should focus more on putting one foot in front of me than I do. -I'll probably be doing that this weekend when it's raining while I'm on a long run.

Aretha has both big and long going on. Maybe the problem is that she literally can't find a bra capable of holding them up. I just keep thinking she must have chronic back pain!
1:33 AM, December 08, 2009