Happy Mother's Day to all you mothers out there! Are you having a great day? I am and it's all because of my sons. Clearly, I wouldn't be a mommy without my little boys, "O" and "T". 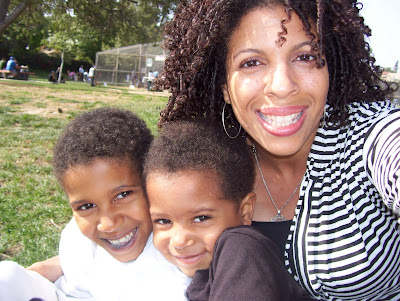 Yesterday I had one of those moments where I realized that I really am a mom. I mean, who else but a mom hangs out at a park for hours at a time because their kid's have sporting events?

My baby "O" (on the left with the popsicle-blue lips) is on a baseball team and he had team pictures yesterday from 11-12:30 and a game at 2. Of course, after the game, the boys wanted to play on the jungle gyms so I set up shop on the grass. I was supposed to be reading my book, Michael Chabon's "Gentlemen of the Road", but I ended up spending a lot of time watching my sons play and thinking about how good and sweet they are.

They were making me laugh so hard because every so often, they'd run over and say, "You know we're going to Disneyland tomorrow for Mother's Day, right?"

I think they were hoping they could break me down to the point that I'd cave in and say, "That's a great idea! Let's go see Mickey!" But nope, instead I got up this morning, ended my TV abstinence by watching Meet the Press and then did a Jillian Michaels workout DVD. The DVD is called "30 Day Shred". Apparently, if I do it every day for the next 30 days, I'm gonna look shredded! I'm inclined to believe it, especially since I'm now having a hard time even typing because I'm so sore.

Hands down, the funniest moment of the morning came right after I'd finished working out and was putting my free weights back under the couch. There was a loud knock on my front door and even though I was a hot sweaty mess, I had to answer it because my husband had stepped out for a minute to go buy some milk. So, I answer and there's this hot guy standing there with something wrapped in some brown paper. 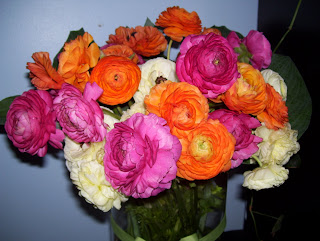 He says, "These flowers are for you," and holds them out to me.

I'm sooo stupid that I thought this guy was giving me flowers from him!

I actually said, "Are these from you?" -- to which he confusedly replied, "No, I'm just giving them to you."

It took a second for me to realize that he worked for a florist and was merely delivering the flowers. In my defense, I had just done a workout that promised to make me shredded so I think my brain partially shut off because of the pain vibrating through my quadriceps.

While this guy is standing there holding this bunch of flowers out to my dumb self, here comes 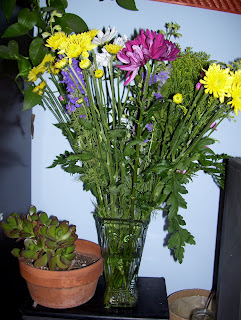 my husband bounding up the steps with yet another bouquet of flowers and a huge balloon that says, "Queen for a Day!" on it. Uh huh, going to go get a carton of milk, yeah, right. He comes and stands next to the delivery guy too and is all, "These are for you," while looking at the man like, "Who the hell are you and why are you here?'

Never in my life have I been presented with two bunches of flowers at once! Wowzer! So, I took the package from the delivery guy, unwrapped the brown paper and saw that it was a huge bunch of ranunculus! Ranunculus are my absolute favorite flower in the whole world and these ones, as you can see from the picture above, are absolutely GORGEOUS!

My husband looked a little deflated as he stood there with his bunch of yellow, purple and white daisies. "Who are those from?"

I should've replied, "From my other baby daddy," but instead I opened the card to reveal that they're from my awesome sister! Love her! And, now I'm feeling like I'm "all that" because I got two bunches of flowers in one day!

I know there are those who hate Mother's Day. They say, "It's just a commercial holiday. People should honor their mother's every day." There's no denying that is true. But still, it's nice to see my little boys shyly presenting me with the pictures and poems they made at school and I got two bunches of flowers!

Sooo, if you haven't already connected with your mother today, the clock is ticking! Even if you all don't get along and you're still in therapy from your traumatic childhood, give your mom a ring. As a friend told me, one day your mom won't be there and you'll wish you could tell her you love her just once more. Separate the behavior from the person and just reach out because hey, she did carry you for 10 months and that is no small commitment.

Anyway, my eldest just asked me, "Aren't you going to go get your nails done or something?" Yes I am, and some waxing too! See ya!
Email Post
Labels: exercising flowers husbands kids mothers ranunculus Waxing

Anonymous said…
Hurray for two hot guys with flowers - life simply does not get better than that! I'm delighted that the men, children and even a sister celebrate you! Hurray!

I've been doing Jillian Michaels "making the cut" (book) for the last 3 months. Holy Crap - it works! You just do your workout and you'll see.

1969 said…
Awww..poor hubby's feelings got hurt. LOL. (Both sets of flowers are nice but ahem...I like the first batch better...shhh!)

brotherkomrade said…
"My husband looked a little deflated as he stood there with his bunch of yellow, purple and white daisies. "Who are those from?"

I should've replied, "From my other baby daddy," "

Ha, Ha!
My wife gets me with that, "other baby daddy" stuff all the time.

Jameil said…
awww!! every time i see rananununununculuses i think of you! one of the first posts you ever wrote was abt them & i'd never even heard of them! lmao @ "Are these from you?" HILARITY! you know i want that dvd yesterday, right? yeah.... lol. yay for the homemade gifts!
8:07 AM, May 12, 2008

Liz Dwyer said…
Claudia,
Yes, two sets of flowers is amazing! I hope they don't die too quickly because they look and smell heavenly.

And Jillian Michaels -- okay I did day two this morning and goodness, I felt like a glutton for punishment. I haven't checked out the book but the DVD is fantastic. I'm gonna be looking hot on the shores of Lake Michigan this summer!

Brotherkomrade,
I think I like your wife! She sounds like a smart lady! :) Glad you came by to visit and enjoyed the blog.

Jen,
Oh thank you! It was a lovely day and even the kids had so much fun that they forgot about their plot to go to Disneyland. Or rather, they've just switched the focus of the plot. This morning I got asked, "Do you think Daddy might like to go to Disneyland for Father's Day?"

Jameil,
I honestly think I started liking them as a child because they had the weirdest name for a flower! And that DVD, you will love it. Totally back to basics. You'll feel like you're in bootcamp!
9:46 AM, May 12, 2008

Liz Dwyer said…
Anali,
It was really good! And twice as many flowers is fab. I'm thinking about pressing some of them and framing them because they're so lovely!

Felicity,
Why thank you! It's much appreciated!

Ian,
Merci bien! And gosh that was before the eyebrow and lip waxing! ;)

Cyndee,
Say that after the boys have driven you crazy for five weeks this summer! hah hah! And thank you again for the BEAUTIFUL flowers!
11:04 PM, May 13, 2008