I Won a Depeche Mode Contest! 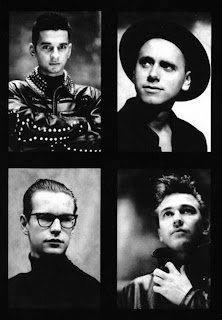 I'm still in shock because I never win anything but I found out yesterday afternoon that I won a Depeche Mode contest!!!

I won all ten US Remastered Vinyl Editions of the Depeche Mode remastered collection! That means my old-school record player having self is going to get a vinyl copy of each of ten Depeche Mode albums, from Speak and Spell to Exciter. This is beyond exciting. I'll take a crazy goat/sorceress dream any day if this is what happens to me!

Besides, this is doubly exciting because it breaks my streak of not winning contests. I think the last time I won a contest was back in the summer of 1993! I'd just bought some Depeche Mode cd singles at a Rose Records in Chicago and the guy behind the counter was seriously flirting with me. I remember he said corny things like, "Depeche Mode, huh? Aren't they kinda kinky? You into that kind of kinky stuff?"

Yeah, loser. Kinky. I still can't believe I spent five minutes trying to school him on the finer, deeper points of what Depeche Mode is about. I'll blame it on my being 20 years old and too nice for my own good. But, just when I decided to give up and leave, he said, "Hey, don't forget to enter the Q101 contest."

Q101 is the big alternative/rock station in Chicago and they were giving away a trip to Brazil. At the time I figured this guy only reminded me of it because he was going to try to jack my number off the entry form. But I made sure to fold it in half twice and then stuck it in the entry box myself.

Two months later I got a call saying I'd won a trip to Rio and Salvador Bahia. I thought it was just the pervy guy calling from the record store, but no, I was live on-air saying, "Look, I don't know who you think you are but I will get you fired!" It was such bad timing though. No one I knew would go with me AND the trip dates were right in the middle of final exams. Just when I'd decided to go to Brazil alone (I know, dumb, right?) one evil professor would not let me take the final early or late. So, I gave the trip to somebody I knew and they went and had a great time on my behalf.

I've been convinced ever since then that I've been contest jinxed. But now, the jinx is over! The "curse" is lifted and I promise I'm not as superstitious as I sound. Now all I have to do is get my records and then decide which one to listen to first. I think I may go for Music for the Masses. Actually, watching this video for the song "Strangelove" off of that album, I can sort of understand the record shop guy's question. Given what's on MTV now, it's hard to believe this 1987 video for Strangelove got rejected as too racy and had to be re-edited:

Gosh, they are so cute at the end when they're laughing at each other. It's a good reminder that we should never take ourselves quite so seriously. Anyway, happy Friday to you! Hope some good luck comes your way as well!
Email Post
Labels: contests Depeche Mode my favorite things

Anonymous said…
Congratulations! Hurray! Vinyl is making such a come back! Can you play the albums? Maybe while you work on your novel??
12:20 PM, May 16, 2008

Anonymous said…
Congratulations - what a scoop! I don't have much luck with prize draws either. A few years back I won some booze and chocolates at a pub quiz but before that not a dicky bird for decades. I'll have to try dreaming of bald goats....
2:00 PM, May 16, 2008

Toni Campbell said…
Wow! Congratulations! Although I am not a Depeche Mode fan, the old skool girl in me really appreciates getting the remastered vinyl of anything! And don't give up on the contests. A couple years ago I had a winning streak and won a bunch of stuff from different online contests...including a pair of suede boots!
4:03 PM, May 16, 2008

brotherkomrade said…
The sad thing is, when I was a teen, Depeche Mode was the band you hated amongst the hipsters and punks. Now after all those years, it cracks me up to see how many people I slammed with own DM records. I like some of their stuff too. In fact I didn't perpetrate anymore when Strange Love came out.
5:53 PM, May 16, 2008

Liz Dwyer said…
Claudia,
It's nice to see that vinyl hasn't died the death everyone was sure of. I love the warm sound of records and definitely have a turntable to play them on. And yes, I should play them while I work on the novel!

Nick
Maybe you will suddenly win something really big because it's been awhile! Although, I have to say winning some chocolates sounds really good to me right now since I haven't yet eaten breakfast!

Toni,
Ooh, suede boots! Those sound lovely! Maybe your streak of luck will hit you again soon! There's a website called Fat Wallet that has a section that only lists links to just about every contest or promotion you can imagine. Then people can list out things they've won -- the only thing that's weird is it seems like the folks who really go after it never win the massively huge prizes.

Brotherkomrade,
Strangelove is an amazing song. The version I posted with in this entry is the '87 version but I love the '88 version more. And there are still so many DM haters. Someone told me last year that my liking DM must mean that I was a chubby social outcast in high school. Moments like that are when I enjoy admitting that I was a cheerleader!

Neil,
Exactly! It sort of feels like I won a million dollars -- except for the part about still living in an apartment in Silver Lake and driving a 10 year old car. :)

Lisa Johnson said…
Congratulations, but you DO win contests, because you won the one on my blog! So actually you are on a streak. Things happen in threes, so you have one more contest to win! ; )
9:50 AM, May 17, 2008

brotherkomrade said…
"Someone told me last year that my liking DM must mean that I was a chubby social outcast in high school. Moments like that are when I enjoy admitting that I was a cheerleader!"

See, that's a trip! The chubby social outcasts that I knew (myself included) liked either metal or hardcore, hated DM, but the DM lovers were the thin pretty nu wave kids or the 'normal kids'.
10:16 AM, May 17, 2008

Liz Dwyer said…
Anali,
That's RIGHT! AAGH! See, I have no memory, whatsoever. I can only remember maybe 30-40% of what happens to me. And I'm still getting cool recipes off that site!

Brotherkomrade,
Well, I leave out the part about me being a sort of chubby, social outcast who somehow ended up on the cheerleading squad. (Shh don't tell anybody.) I wasn't really into metal or hardcore that much because at my high school those were the kids that seemed like ex-Klan members.
11:42 AM, May 17, 2008

Liz Dwyer said…
Jameil,
I wish I had known you then because you could've gone and showed them Brazilian ladies how hotness is really done! ;)
3:06 PM, May 17, 2008