A Big Box of Records!

I love nice people, especially when they bring me a big box of Depeche Mode records!

If you recall, a week ago I won a set of all ten US Remastered Vinyl Editions of each of Depeche Mode's albums! Well, my dear friends, here's your obscenely happy girl, Los Angelista, getting my records today from the fabulous Daniel Barassi, webmaster of the official Depeche Mode site: 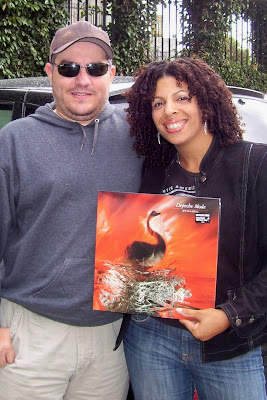 Daniel gets the fun task of doing everything for the site plus he does lots of other Depeche Mode projects as well. Clearly, he works really, really hard and probably doesn't get too much thanks from fans for all he does. Seriously, can you imagine having to deal with all the crazy people who are Depeche Mode fans? The poor man has probably moderated a million, "Dave Gahan is hot!" type threads. Oh and then there's the threads where we fans speculate endlessly about the new album, a tour, whether the band is going to retire after this record, and on and on. You name it, he's read it!

Unfortunately though, as enjoyable as all that sounds, his job has a downside. He has to ban the more stalkerish and crazy fans from the message boards and enforce general policies around what you can and cannot post. At times it amazes me how mad some of these people get at Daniel when they're the one violating the rules of the board. They act like he's a total ogre, but really, when you meet him, he's quite funny and very sweet...and I'm not just saying that because he brought me these records this afternoon!

I do think I scared him a bit when I gave him a big hug while saying hello. What can I say, I like to hug people who do nice things for me! Plus, I know full well he really didn't have to drive to meet me, what with gas prices being like $4.29 and all. He could've popped them all in the mail and sent the bill to the record company.

In case you're wondering, we're posing with "Speak & Spell", Depeche Mode's very first album. He thought I should pose with "Violator", arguably their most well known record. But I have to keep it old-school and take it back to where it all started.

So now that I have them, what happens next? Well, I know I said in my previous post on these records that I was going to listen to "Music for the Masses" first. I probably will still pick that one. However, it'll be a few days till I spark up my turntable. Right now I'm just going to marvel at the pristine beauty of these records and be grateful for my unexpected luck and the niceness that came with it.
Email Post
Labels: contests daniel barassi Depeche Mode Music

Anonymous said…
Hurray!! How wonderful - and what a perfect gift for the long weekend! Yippee!!

(I also saw that you are writing! High five! Think of it this way: if Depeche Mode didn't take the risk to let people read their material, you would not have ever heard them.)
7:28 PM, May 24, 2008

Liz Dwyer said…
Claudia,
These records are beyond amazing. You can open each one just like a book and there's great liner notes and the lyrics to each song, plus photos of the band. It's fabulous.

And the writing...I've been working on a short story that I've been rather obsessed with. I think it may turn into something longer. I'll send you something to read because I'd love to know your thoughts.

Jameil,
They do like them! When I was pregnant, I hooked my belly up with headphones playing Prince, Mozart and Depeche Mode, so they've literally been raised on it since before birth.
2:12 PM, May 25, 2008

Anonymous said…
It's funny you picked the first album. I wonder what direction the band would have taken if Vince Clarke had stayed. I am looking forward to seeing Yaz in July! Black Celebration is one of my favorite albums - Fly on the Windscreen. I used to make fun of the Enjoy the Silence video as being a Burger King ad with Dave wearing the crown. I won a contest to met the band and I recall with horror now the religious conversation I had with Martin Gore and their being role models. I was 19 what can I say!
9:24 PM, May 25, 2008

Liz Dwyer said…
Heartsandflowers,
You won a contest to meet them! Now that is crazy cool! And LOL about your convo with Martin. I can't even imagine the stupid things that might come out of my mouth in such a situation. I'm listening to BC right now! I also wonder what they'd sound like too if Vince had stayed. One thing's for sure, we wouldn't have had Mart songwriting as much and they probably would've ended up more like how Erasure sounds or Yaz. (No MFTM, I'll bet). Very cool that you're going to check Yaz out though. I saw Alison Moyet on TV a few months ago and gosh, I love her voice.

Anonymous said…
I just bought all of the La Femme Nikita tv series dvds - had to wait years for the price to go down...anyway Barrel of a Gun was featured in one my favorite episodes. Yeah I think it's good that VC left because Martin's writing was so good yet so twisted! I always liked when he sang lead and of course have both Counterfeit cds. I lived in NYC pre-Giuliani years and would get all of my imports from RoadRunner records. I had to have all the remixes and B-sides. It was Depeche and the Cure. I definitely favored the British artists. 1989-1990: Soul II Soul's Club Classics Vol I; Violator; Disintegration and with exception Dee-Lite's World Clique were on permanent rotation back then. Ahhh the good old days!!!
6:43 PM, May 26, 2008

Liz Dwyer said…
Heartsandflowers,
I'm waiting for the price on Buffy to go down so I know how you feel!

You must have quite an amazing collection. I also favor the British artists from that time period. A couple of friends joke that they were convinced I was going to marry someone from the UK because of my musical tastes! :) I do love The Cure. Disintegration is a total masterpiece. However, a couple of weeks ago I was playing the heck out of "Charlotte Sometimes" from way back in their early years. I'm still kicking myself that I didn't get tickets to see them here in LA.
1:42 AM, May 27, 2008