Why I Don't Use UPS If I Can Help It 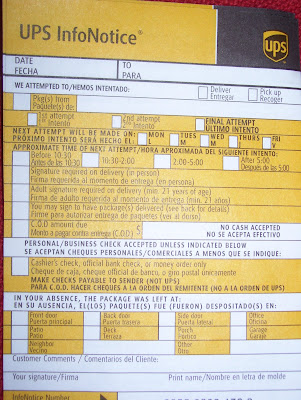 Two UPS "Info Notice" stickies were on the door to my apartment building yesterday. One on top of the other. And they both looked like this: 100% blank.

Now, if this notice was stuck on the outside door of your apartment building, would you have any reason to believe there's a package for you?

Is there anything in the "Date' box? The "To" box?

Is there any writing at all on this info notice?

If your eyes see what my eyes see, the answer is a resounding, "NO!"

This "Info Notice" needs another name. It should be named the "Don't Use UPS" notice. Or how about the, "Fire the Extremely Trifling UPS Driver" notice?

Yeah, I like that second option and here's why:

The UPS drivers who come to my neighborhood regularly do things like not bother to ring the bell. They just stick the notice up without ringing. And they'll mark down that it's the final delivery attempt even when no other delivery attempts have been made.

There was a little fiasco back in October when we were waiting and waiting for a package, called the company we'd ordered from, and found out the package had been returned for non-delivery. And we'd received zero notices from UPS.

And then of course there was the time that I was waiting for something else, called UPS customer service, told them that I'd gotten a 3rd attempt notice, no other notices and besides I'd been home ALL DAY...and I got told that the drivers operate on a tight schedule and maybe he hadn't had time to leave a notice. Talk about the essence of "we want to lose you as a customer" responses right there.

Then I got told that the delivery would be made by 6 PM...and the driver showed up after 8:00 with an attitude.

Need some more reasons to skip UPS? Well, how about my sister sent me an item and she had an employee at the UPS store pack it. Said item was broken when it got here and we had to go through major rigmarole to get her $40 shipping and handling money refunded. Of course, they left out refunding actual purchase price of the item that was broken.

So given all this I pulled both notices down and called their 800 number. I figured I'd check and see who in my building these packages were for. First I had to go through five annoying minutes of an automated phone stuff that left me wanting to yell profanities into the phone. Then I was on hold for about ten minutes.

Finally I got a guy on the phone, explained the situation to him and gave him the tracking number off the first slip. All I wanted to know was if it was package for my address. And no, it was for someone a good THREE blocks away. So what the heck was it doing stuck on my door?

I almost didn't ask about the second notice, the one hidden directly underneath the first notice on the door. After all, that was probably for that other address as well, right?

I went ahead and gave the tracking number...and guess what, the package was for me and the driver claimed that this was a second attempt and no one had been home. I asked what time the delivery attempts were made and sure enough, both times a delivery had supposedly been attempted were two times I'd been home. Besides, I don't know what's in the package! Maybe a birthday present for me???

Someone is supposed to be calling me tomorrow to discuss this with me and I am definitely looking forward to the conversation. I don't want to be mean, but the level of ineptness is ridiculous.

Really, I'm sorry if you happen to be reading this and also work at UPS, but I'm not a fan of your people. Quite frankly, I'd rather go stand in line at the post office or pay more for FedEx than waste any time or money with UPS.
Email Post
Labels: Customer Service UPS

You are preaching to the choir! A while ago I ordered a coffee mug from NPR. And after a month and a half I still had not rcvd it!

When I got in touch with NPR they said the mug had been returned to them. So they mailed it again, using UPS. So a few days later I see a final delivery notice!

I called UPS and they said I could come out to the facility to pick up the package.

I was so angry. I just let them send it back because their processing facility is a long way from me and why should I have to go there anyway.

Jen said…
Been there, done that. I think we have the same UPS driver, which would explain his/her befuddlement/exhaustion, since I live in Ann Arbor, Michigan and presumably you live in LA?

Anonymous said…
Living in Chicago I have the opposite problem. Chicago has the worst postal system in the country, it's been studied. My postal deliver person delivers only every other day. One day nothing, the next, my mailbox is full and half of it isn't even mine. It takes 4-5 days for mail most days.

Liz Dwyer said…
MDC,
That's really something that it finally got to you with the regular mail. I suppose UPS has so much business that they don't care whether or not we little people get our stuff in a timely manner.

Jen,
I used to always feel so sorry for the drivers because I know they are overworked and expected to make delivery miracles. But these last few months has made all the sympathy evaporate. And yes, I live in LA...and it's beautiful and sunny today. :)

Saraha,
A few years ago our UPS guy was awesome. He must have moved on to bigger and better things. In general we don't have those problems with USPS but non delivery does sometimes happen out here too. However, I know that if I pop a local letter in the mail in the morning, folks will get it the next afternoon.

The delivery guy that used to come to the office was short and stocky. But, when I see them out on the streets, definitely nice legs all around.

Open Grove Claudia said…
That's just awful. I tried to not get something UPS and that was just as awful. For as slow (colorado is rated 49th worst service in the country) and awful as USPS, I usually get what's shipped. I'm really sorry!

Anonymous said…
I have EVERYTHING shipped to my office since the guys that deliver to businesses are just more reliable than the ones with residential routes.

Liz Dwyer said…
Claudia,
No one called all day as promised and so I just called them and was told that today is a holiday for them. That's fine but they should have told me that on Saturday! AAGH!

I hope you have a wonderful '08 as well! I am wishing more places would move back to shipping via USPS.

Jali,
See, that's the thing, I had ZERO problems when I had everything shipped to work. Now that I work from home, I think I'm stuck with the unreliable drivers. UGH

none said…
What do you expect from rotten teamsters? ;)

UPS is much better here, They leave the packages on the doorstep unless the neighborhood is known for a ton of crime then they get a neighbor to sign for it.
6:56 AM, January 01, 2008

Liz Dwyer said…
Hammer,
Happy New Year to you too!

There'd be no way drivers could leave packages on our front porches in this neighborhood. There's too much foot traffic. Wish they could though.
5:16 AM, January 02, 2008